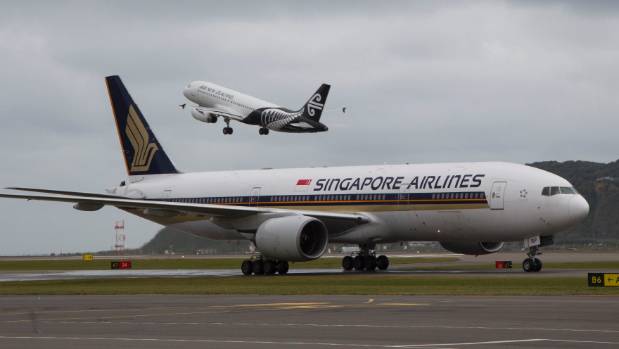 Demand for Singapore Airlines’ ‘capital express’ service to Wellington is “pretty much” matching what it had expected, the airline’s New Zealand boss says.

But after a year which had a “lot of learnings”, the airline hoped to build support for the service further over the next year, admitting there was still some work to do.

Travellers flying from Wellington to Singapore via Canberra could also look forward to the possibility of new aircraft replacing the Boeing 777-200 on the route, Singapore Airlines general manager New Zealand Simon Turcotte said.

The ‘capital express’ service has celebrated its first birthday on Thursday by offering flights to Canberra for $154, and return flights to Singapore for $997.

Turcotte said there had been a mix of leisure, business and government travellers during its first year.

It had tweaked the timing of the service up by an hour two months ago to provide better connectivity from Singapore, where travellers could tap into another 135 destinations in 37 countries.

“The majority of our traffic is going to Singapore and beyond,” Turcotte said.

“Demand is pretty much matching what we’d expected, but there’s been a lot of learnings after a year.”

A report from the CAPA Centre for Aviation in July said the service, Wellington Airport’s fifth foreign airline, had led to a “more modest than expected” increase in international traffic for the airport.

Wellington Airport chief executive Steve Sanderson said the $147 million Asian visitor spend in the Wellington region was up 16 per cent on the previous year.

But CAPA said the service had been impacted by a less than ideal product, which was something a report prepared by Wellington City Council’s chief executive office also pointed out.

CAPA said a nonstop service could be viable if the runway was extended, however.

“With a better product and nonstop service Singapore Airlines would be able to attract a much larger share of the Wellington to Singapore market,” CAPA said.

Turcotte said there was “some work to do” between Canberra and Wellington, but wanted to see how the timing tweaks panned out over the next year.

When the airline launched in Auckland 41 years ago it only operated two flights a week, which was “a lot more timid” than in Wellington.

“That’s the direction we’d like to take Wellington,” Turcotte said.

“It’s probably not going to happen over the next six months to a year.”

Turcotte said the airline was in the process of renewing its fleet, having more than 120 new planes on order from Airbus and Boeing.

“These orders of new aircraft enable us to continue operating a modern and fuel-efficient fleet, as well as providing the SIA Group with additional expansion and network growth opportunities to ensure that we retain our industry-leading position.

“As more new aircraft enter our fleet, it will provide an opportunity to retire older aircraft and deploy newer aircraft on to those routes, however we are yet to confirm any deployment dates.”

He was confident about the year ahead.

“There’s definitely been strong demand coming into New Zealand and in the immediate future we foresee that this will continue.”