Immigration Checkpoint Authority (ICA), an institution responsible for the security of Singapore’s borders, deported on Tuesday two Indonesian citizens, who were reportedly trying to depart for Syria via the country, to Batam, Riau Islands, under security escort. It is suspected that the two people intended to join the extremist Islamic State (IS) movement.

“They have been handed over to the police. The Batam Police, together with the Immigration Office, are now investigating the two individuals,” Erlangga told The Jakarta Post on Wednesday.

He further explained that the ICA had investigated MNA and SI after they were interrogated during a security inspection at an immigration checkpoint at Harbor Front Center, a Singaporean seaport, which serves Batam-Singapore ship routes.

“During the interrogation, they admitted they were planning to depart for Syria. Regarding whether they intended to join IS, we still need to carry out an intensive examination,” said Erlangga.

It was reported that MNA and SI departed to Singapore using the fast boat Queens Star Sindo on Monday afternoon. They were deported back to Batam after an almost 24-hour interrogation. The two are only the latest among many Indonesian citizens Singapore has deported for allegedly trying to join IS militants in Syria. (ebf) 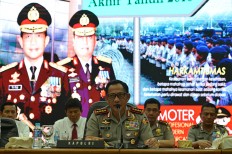 Previous The 10 things the travel industry needs to fix in 2017
Next AgustaWestland: CBI receives response from all eight countries, to begin fresh questioning