Singapore seeks to turn labor crunch into a robot revolution 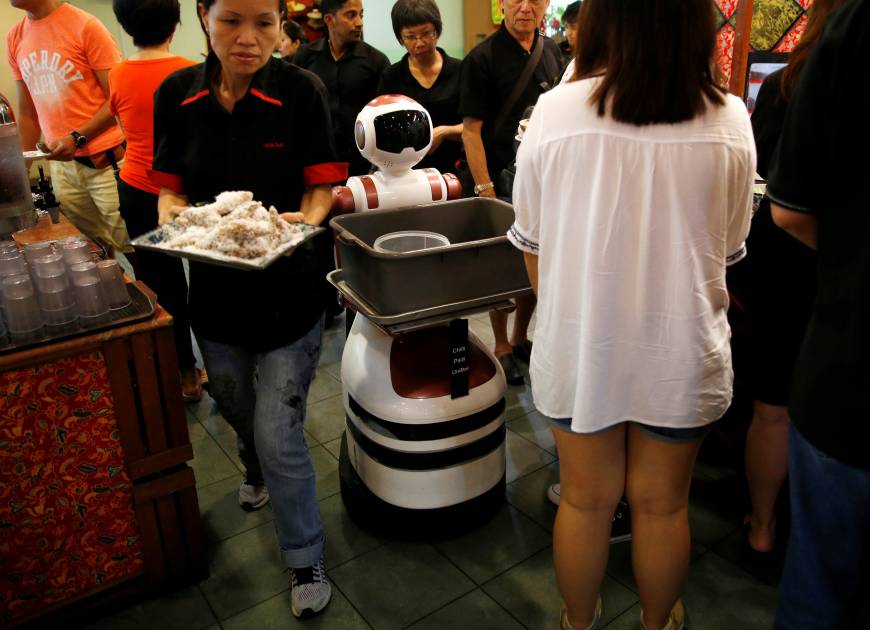 SINGAPORE – Sherine Toh says her best days at work are when none of the 600 or so staffers at Singapore’s Tung Lok Restaurants quits, though such days are rare.

The Chinese restaurant group is one of the thousands of businesses struggling with a labor crunch caused by curbs on foreign workers that threaten the city-state’s already feeble growth rates.

“It has gotten much tougher compared to the old days, five years back,” said Toh, who has at least 20 vacancies to fill at any one time as head of human resources. The group closed some outlets because of the shortage.

The city’s restaurants, hotels and retailers have become the biggest casualties of the labor crunch since Singapore accelerated restrictions on foreign workers in 2011 as political disquiet about immigration grew. But its highly educated locals largely shun the late hours and unglamorous work.

To address the constraints, Singapore is pushing businesses to look to nonhuman solutions for their human resource challenges, including greater use of automation and robotics.

At Chilli Padi Nonya Cafe near a leafy university enclave, a tray-wielding robot roams the eatery, offering to collect plates from patrons in a childlike voice. Navigating its way through customers, it delivers the dirty dishes to the kitchen.

While tech powerhouses such as Japan, the U.S. and Germany invest billions in robotics, Singapore’s robot push is driven by a much more urgent need: The survival of some labor-strapped small- and medium-size businesses may depend on them.

In the food and beverage industry, 90 percent of the businesses face a labor shortage, and about a third are “really struggling,” according to its lobby group.

“There is an increasing number of businesses that are up for sale,” said Lim Rui Shan, executive director at the Restaurant Association of Singapore, which represents 2,200 outlets. “Some of them just shut down.”

Andrew Khaw, Infocomm Development Authority’s senior director of productivity growth through information and communications technology, admits the take-up of robots is slower than he would like. But he says the lack of manpower is a new operating reality businesses now need to accept.

Service robots can be found in Singapore — in hospitals and restaurants, as waiters or cleaners — but are less ubiquitous than might be expected for the aggressively tech-oriented economy.

Weak capital expenditure amid the global slowdown has made it difficult for a virtuous robot development cycle to rev up in Singapore.

For now, manpower is just one of many economic challenges. Singapore cut its 2016 growth forecast this month after revising down its second-quarter growth as the service sector contracted.