Singapore Strait: US destroyer was struck in some of the world's busiest waters

After the USS Fitzgerald collided with a giant container ship in mid-June, killing seven sailors, Admiral William F. Moran, vice chief of naval operations, said that the US Navy crew’s lack of preparedness was partly to blame.

Two months later, another destroyer from the same fleet has collided with an oil tanker and 10 of its crew are still missing. The USS John S. McCain suffered significant damage to its hull, which flooded nearby compartments, including crew berthing, machinery and communications rooms, the 7th Fleet said in a statement.

On Monday, the US Navy’s chief halted all operations worldwide for a fleet-wide safety review.

The waters where the latest incident took place – the Singapore Strait, a 16-kilometre-wide maritime gantlet brimming with ships moving between the Indian Ocean and South China Sea – demand heightened precaution. If there is a systemic lack of preparedness in the fleet, then crossing through these waters, however peaceful, represent one of its biggest risks. 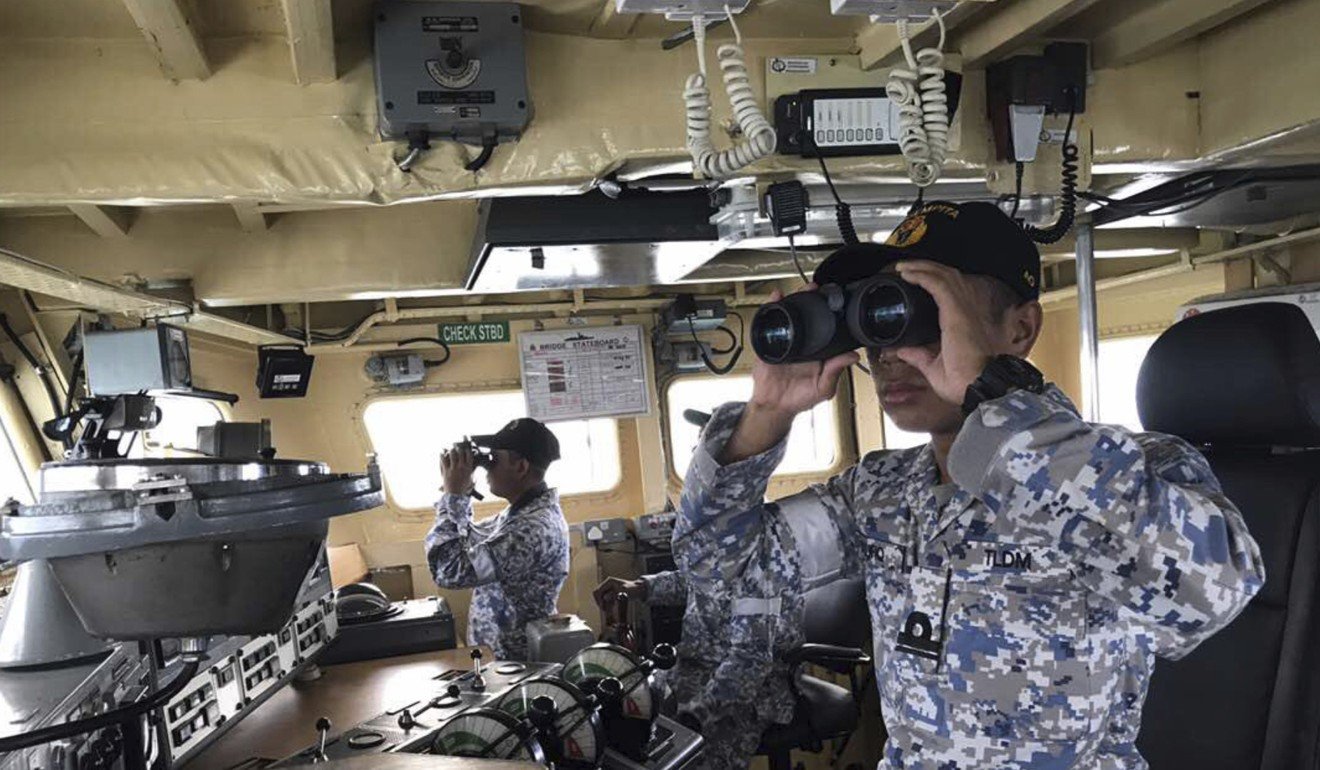 Captain Rahul Khanna, head of marine risk consulting at Allianz, a global insurance company, said the waters outside Singapore are particularly dense and hard to navigate, with a constant stream of ships waiting offshore to pick up loads and criss-crossing the passage after refuelling. In addition to being one of the busiest shipping areas in the world, he said, it’s also one of the riskiest.

“It’s a very dynamic environment. These are areas where lots of ships funnel through,” said Khanna, who captained oil tankers for two years.

“It requires the utmost level of situational awareness to pass through, and every sailor is aware of that.” 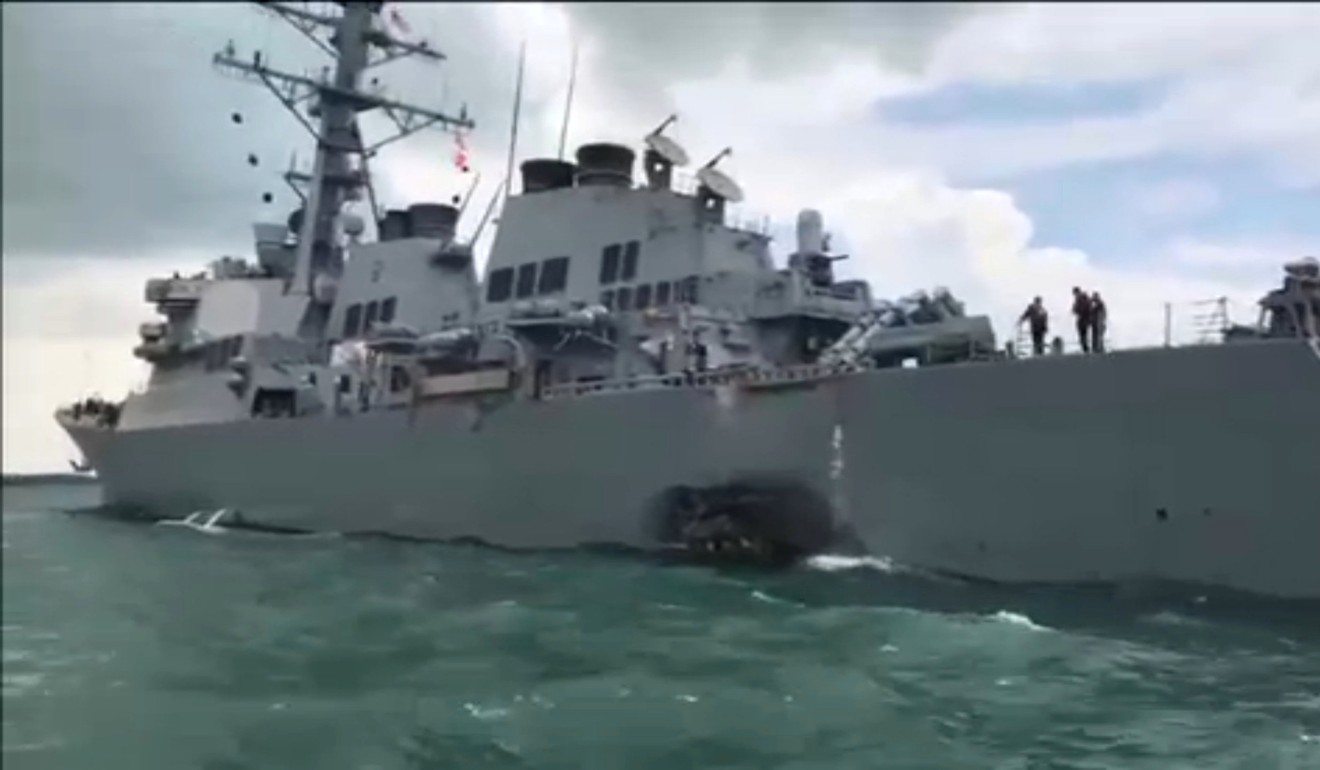 According to Allianz statistics, more than three-quarters of all maritime incidents are attributable to human error. Collisions usually involve a combination of factors such as malfunctioning equipment and a breakdown in communication among the ship’s officers, Khanna said.

“You need to be extra careful,” Khanna said.

“Your bridge team has to perform very well. They should be trained well enough to deal with this.”

Other maritime risk experts said that while travelling through the Singapore Strait carries a higher risk of collision, such incidents are becoming less frequent, making the 7th Fleet’s mishaps all the more remarkable. 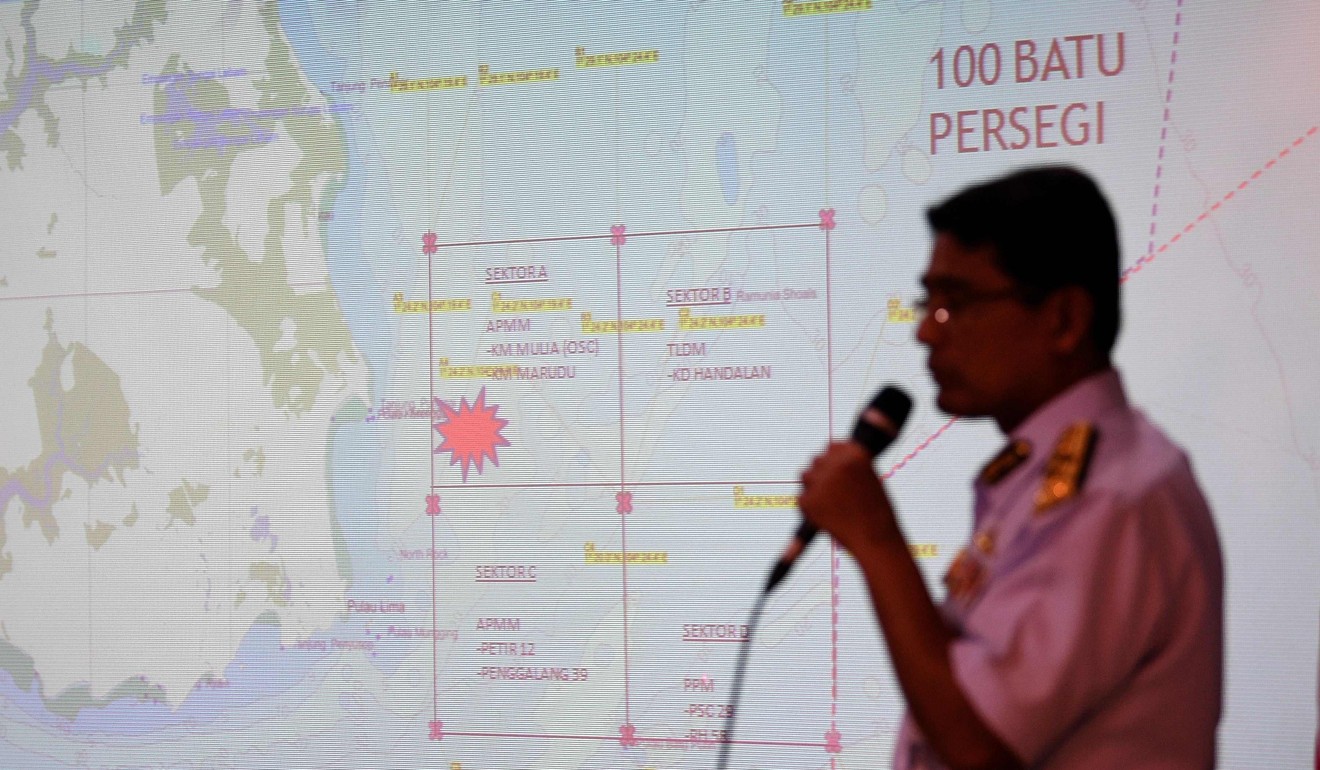 “According to global statistics there is a reducing trend for collision at sea as a percentage of overall causes of total losses of vessels,” said Nathan Hambrook-Skinner of Lloyd’s of London. He cautioned, however, that as much as it might seem like it, drawing conclusions about the reasons behind Monday’s collision would be premature until a full investigation was conducted.

Peter Roberts, director of Military Sciences at the Royal United Services Institute and a former officer in the Royal Navy, agreed that it was too early to tell whether the collisions involving the McCain and the Fitzgerald were the result of similar failures or just a coincidence.

“To have two in one summer is either amazingly bad luck, or there might be other factors that contributed to it,” Roberts said. 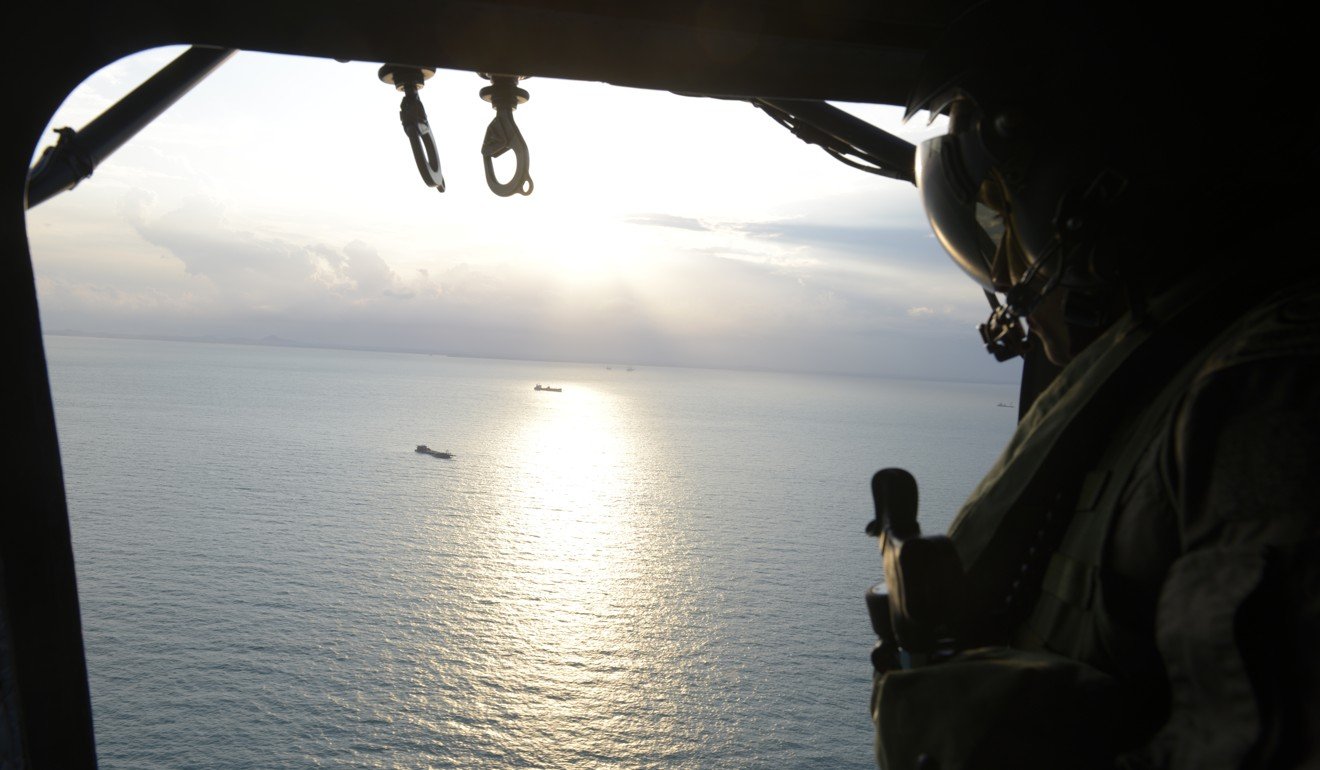 “Because these collisions are so rare and because the standards of seamanship are so high, it’s difficult to see how these two things happened so quickly after each other.”

Roberts questioned the notion that the relatively smaller and more agile Navy destroyer should have been able to rapidly change course and steer clear of the hulking oil tanker. Destroyers are fast and highly manoeuvrable, he said, but that only would have helped if the McCain was far enough away.

“At close range it might well be very difficult to avoid a collision,” he said. “The question is how the ships got in that close range.”

The location of the damage on the McCain seemed to indicate that the ship had tried to manoeuvre out of the away, Roberts said. “The fact that the ship is still running is a tribute to some quick thinking on the part of the crew,” he said. 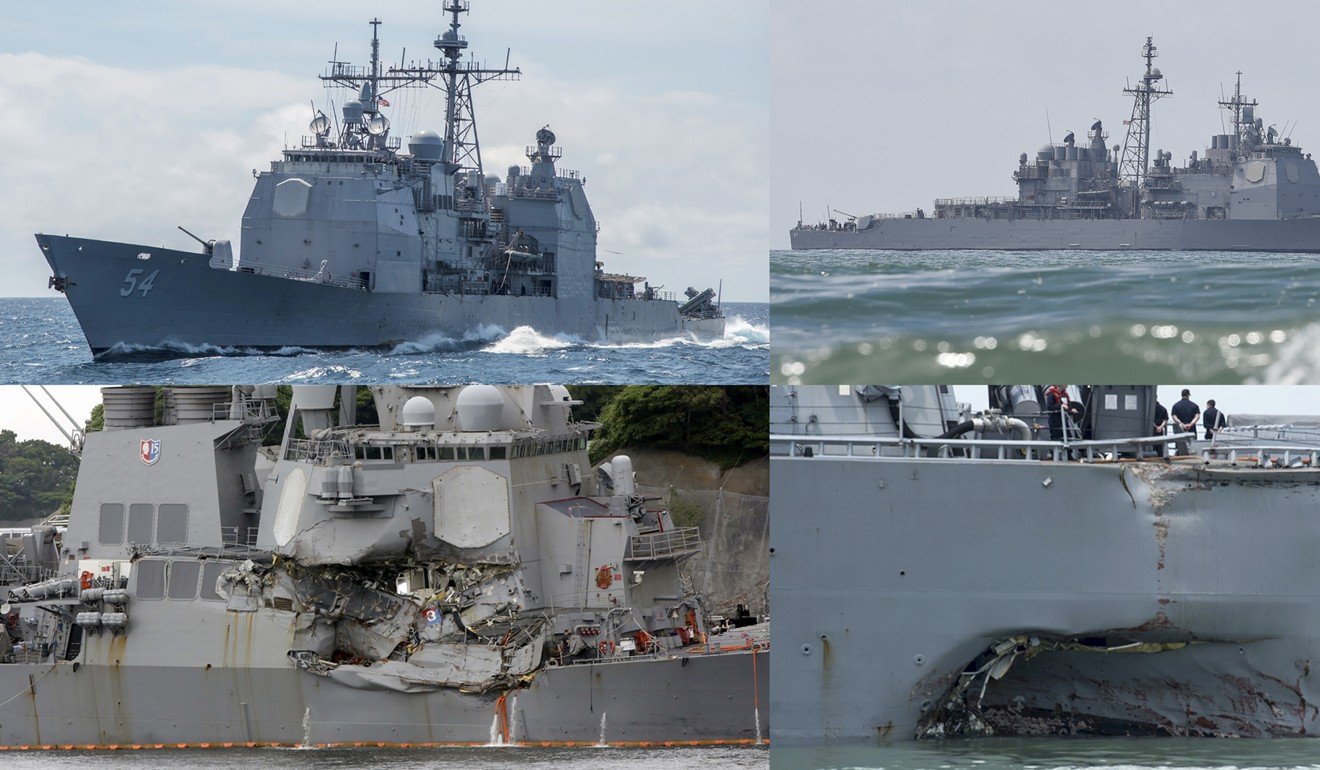 The commander of the USS Antietam was relieved of duty after the guided-missile cruiser ran aground while it was anchoring near Yokosuka base, the home port of the US Navy’s Japan-based 7th Fleet.

The ship’s propellers were damaged, and it returned to Yokosuka with the help of tugboats, the Navy said. About 4,000 litres of hydraulic fuel leaked into Tokyo Bay, according to media reports.

Capt. Joseph Carrigan was removed from command about a month later.

Stars and Stripes newspaper said an investigation report it obtained under the Freedom of Information Act describes a series of errors and incorrect judgments leading to the grounding.

No one was injured, and both ships were able to sail away under their own power, the Navy said.

The Champlain sounded its horn and tried to contact the fishing boat, but the latter did not have a radio, the US Naval Institute News website said, citing an unnamed Defence official.

The San Diego-based Champlain was operating in the western Pacific for the first half of the year as part of the 3rd Fleet’s USS Carl Vinson aircraft carrier strike group.

Seven sailors died after a container ship collided with the USS Fitzgerald guided-missile destroyer off Japan.

The collision tore a gash into the side of the Yokosuka-based ship, flooding sleeping quarters and other areas.

The cause remains under investigation, but the Navy relieved the ship’s commanding officer and two other senior officers on Friday, just three days before the latest collision.

The Navy said “the collision was avoidable and both ships showed poor seamanship.”

Ten sailors are missing after the USS John S. McCain guided-missile destroyer collided with an oil tanker near Singapore.

The collision left a gaping hole in the destroyer’s hull, flooding adjacent compartments including crew berths and machinery and communications rooms.

There was no immediate explanation for the collision. Singapore, at the southern tip of the Malay Peninsula, is one of the world’s busiest ports and a US ally, with its naval base regularly visited by American warships