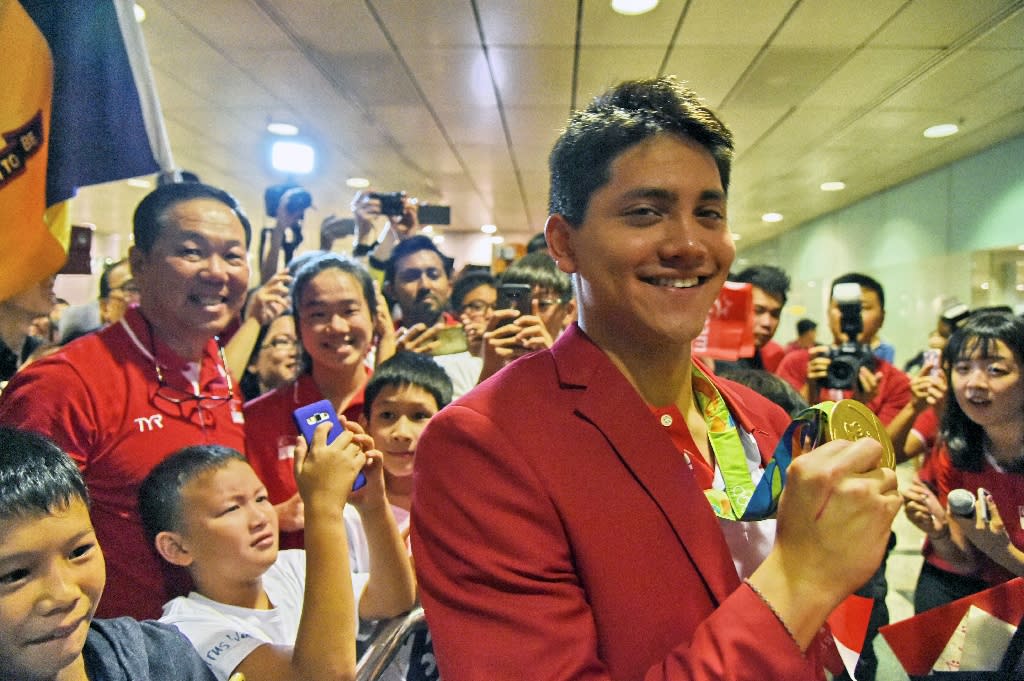 Singapore swimmer Joseph Schooling returned home to a rousing welcome on Monday after winning the city-state’s first ever Olympic gold medal with a stunning victory over the legendary Michael Phelps.

The 21-year-old Asian champion set a new Olympic record of 50.39sec in Rio on Friday as he edged out his American idol Phelps, the most decorated Olympian in history, in the men’s 100m butterfly final.

“Joseph, I love you!” a fan screamed as others chanted “Schooling” and “Singapore” when he emerged into the arrivals hall at Changi Airport at 6:20 am on Monday (2220 GMT Sunday) wearing his gold medal and a red jacket.

Schooling immediately hugged his waiting father Colin, 68, who was unable to make the long journey to Rio after falling ill. They posed for a family picture with his mother May, 61, who was his biggest cheerleader in Brazil.

“Thank you everyone for being here so early in the morning. This is not just for me, but for all of you,” Schooling said in a brief speech before wading into the crowd of some 500 people including an international media contingent.

He was still signing autographs more than an hour later.

The family have been invited by Prime Minister Lee Hsien Loong to attend a session of parliament later Monday to hear tributes, and a victory parade is being planned for this week.

Supporters are clamouring for an extension of Schooling’s deferment from two years of military training, a mandatory requirement for all able-bodied Singaporean men when they turn 18.

Officials have indicated this will happen after some formalities.

At 21, Schooling’s best sporting years could still lie ahead. Phelps is 31 and has only just retired after taking his record haul of Olympic medals to 28.

Some waited from midnight to catch a glimpse of Schooling, whose flight home landed at 5:35 am. Many came bearing banners, flags, and homemade signs.

“This is a proud moment for Singapore and our group wanted to share in it since we’re the same age as the nation,” said Sylvia Chua, 51, who made a giant mock gold medal of paper and cardboard that said “Congratulations Joseph”.

Philippines national Emmylou Almeda, who had been waiting since midnight, brought along a printout of a picture she took with Schooling last year.

“He really showed the meaning of hard work, which I think is a really great inspiration for my two sons,” she said.

Third-generation Singaporean Schooling’s mixed European and Asian heritage has resonated strongly in the immigrant society of 5.5 million people, which had to rely on naturalised athletes for years to win medals at international events until Schooling emerged.

Chinese-born female table tennis players won a team silver at the 2008 Beijing Olympics and an individual bronze in London 2012.

Singapore’s first Olympic medal was won by homegrown weightlifter Tan Howe Liang, who bagged a silver in Rome in 1960.