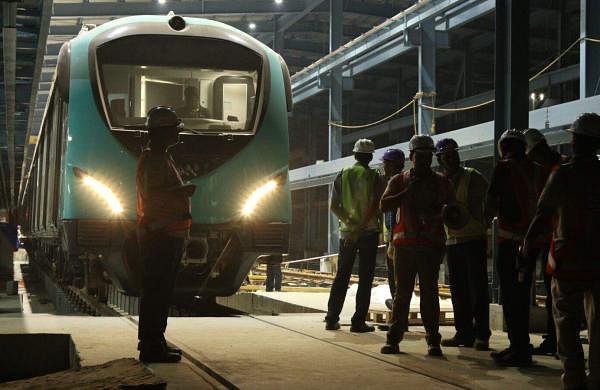 SINGAPORE: Four Singaporean men were Friday charged over a scandal involving contracts for the metro worth almost Sg$10 million ($7.4 million), the latest problem to hit the financial hub’s train network.

The prosecution of the group, which included former and current employees of metro operator SMRT, came after a series of breakdowns on the train system and a collision that injured dozens.

The accidents have caused anger in the city-state where public transport is usually efficient and most have to rely on buses and trains as car prices are among the highest in the world.

Three of the four men caught up in the latest scandal failed to disclose their interest in two engineering companies which had been awarded contracts from SMRT totalling Sg$9.8 million, the anti-corruption bureau said.

The offences allegedly happened between 2007 and 2012, the bureau said, adding that the men have been charged under a law that prohibits cheating.

Two of the men, Jamalludin bin Jumari, 61, and Zakaria bin Mohamed Shariff, 52, are former employees of SMRT and face 28 charges each.

Zulkifli bin Marwi, 52, still works at the rail company as a line manager and faces 24 charges. Akbar Ali bin Tambishahib, 59, a director of the companies awarded the contracts, faces 28 charges.

If convicted, they face up to 10 years jail on each charge.

“The Corrupt Practices Investigation Bureau takes a serious view of any corrupt practices and will not hesitate to take action against any party involved in such acts,” the bureau said in a statement.

In October, rail services on a main line were stopped for 20 hours when an underground tunnel flooded. Last month, 36 people were injured in a train collision.

State investment giant Temasek took full ownership of SMRT last year, delisting it from the Singapore stock exchange, in a bid to overhaul the company.

Stay up to date on all the latest World news with The New Indian Express App. Download now
ManMadeDisasters