As we move towards 2015, a year that will mark Singapore’s 50th anniversary as a nation, a battle over the past of that country is slowly gaining steam. 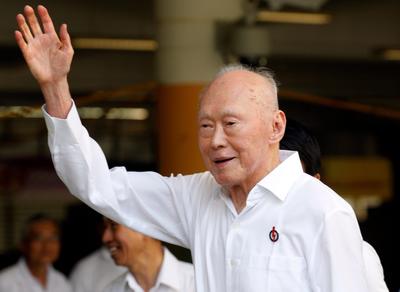 The increasingly frail health of Lee Kuan Yew, the man depicted in the establishment histories as the ‘father of Singapore’, is making this battle more important for both sides.

The People’s Action Party (PAP) is heavily invested in ensuring that their story remains the story of Singapore. And key to that story has been the framework provided by the two-volume autobiography penned by Lee Kuan Yew, prime minister from 1965 to 1990 and still today a member of the Singapore Parliament. The Singapore Story and From Third World to First established the base for the story, upon which have been laid down layer upon layer of hagiographic books such as Lee Kuan Yew: The Grand Master’s Insights on China, the United States, and the World and One Man’s View of the World, together with Lee’s ‘collected works’ — The Papers of Lee Kuan Yew: Speeches, Interviews and Dialogues 1950–1990 and 1990–2011.

The Singapore press — entirely state-controlled — has been a necessary participant in this exercise, giving these histories acres of attention, calculated to leave Singapore and the world with a very positive image of a man who has in fact enjoyed a rather chequered reputation both domestically and regionally. Further, as with Lenin, Stalin, Mao and Deng Xiaoping, the history presented in Lee’s collected works is intended not only to perpetuate memory of the individual but also to bolster the legitimacy of the party that he led. Cadre histories such as Men in White have cemented the PAP into this story.

However, the history as presented by the PAP party-state is now being subject to unprecedented querying and interrogation. In part this has been facilitated by a weakening of the absolute power of the PAP, while the imminent demise of Lee is not unrelated. Civil society groups are also re-emerging from the destruction wrought upon them by the PAP in the 1960s and 1970s. In addition, a new generation of Singapore historians is beginning to sieve archival and oral history materials, finding stories that do not gel with the accounts fed to them through state history. New alternative histories are thereby emerging, alongside more critical blogs.

One of the most sensitive of the issues recently brought to prominence through this new history is Operation Coldstore, a police action conducted in 1963 prior to the creation of Malaysia, a state within which Singapore was soon to be incorporated. This action — planned jointly by the decolonising British and Lee Kuan Yew — eviscerated the Singapore Left through the arrest and detention of more than 130 individuals and allowed Lee to dominate politics on the island.

A recent set of volumes in English and Chinese, edited by some of the Coldstore detainees, reveals the degree to which this was as much an effort to remove Lee’s political opponents as a security operation. The volumes’ suggestion that the PAP under Lee could only survive through British assistance in eliminating his opposition brings into question much about PAP rule over the last 50 years. Responses from some establishment defenders have been scathing of the volumes and their conclusions, while state-controlled media has simply ignored the books and associated launch activities.

The 1987 round of detentions of ‘Marxist’ Singaporeans through Operation Spectrum under the Internal Security Act has also attracted renewed historical attention, with detainees such as Teo Soh Lung penning an account of her detention and continuing to write of her experiences.

In response to the new histories being penned on the Left, the PAP is employing state media and particularly television to depict the threats which it says the Singapore state faced. Responses from the revisionist historians suggest that the PAP is simply using these programmes to validate its actions against the Left over this period.

Perhaps most threatening to the PAP story is a suggestion, now gaining traction, that Lee Kuan Yew deceived all of the people of Singapore in 1957. While in most administrations a lying politician would not warrant even a yawn, the PAP is demanding more from its parliamentarians, with the current Prime Minister Lee Hsien Loong asserting that he would dismiss from the parliament anyone who had lied to the Singaporean people.

It appears now, from recently revealed documents, that Lee Senior ought to be subject to this sanction. Australian and British documents both affirm that during his visit to London in April 1957 Lee Kuan Yew colluded with the British in arrangements to preclude detained Leftists of his party from competing in upcoming elections. After returning to Singapore, Lee publicly stated that these restraints were imposed by Britain, that he was opposed to them, and that the PAP must fight to counter them. Such apparent chicanery does not sit well with PAP history of itself as a squeaky clean party.

The PAP’s reticence in terms of revealing its historical cabinet decisions is also attracting some attention. Following urging by the opposition Workers’ Party chief Low Thia Khiang that the Singapore government should release to the public cabinet records 30 years old or more, Lawrence Wong, Senior Minister of State for Ministry of Communications and Information, closed off the discussion by stating that ‘such an open policy may not necessarily lead to better outcomes’. Again, the power that derives from maintaining a monopoly on key historical sources has been underlined.

History has always been a sensitive topic in this island republic, and been almost fully controlled by the PAP. The alternative history writing now occurring reflects the resurgent influence and appeal of the Left within Singapore, represented in Parliament by the new seats won by the Workers’ Party. This new history is proving to be a key tool by which the monolith of PAP narrative and thereby the party’s arrogated legitimacy is being queried. Such questioning will prove to be an essential element of the political pluralism towards which Singapore is now moving, even if this direction is not everyone’s idea of a good thing.

Geoff Wade is a Visiting Fellow at the Crawford School of Public Policy at The Australian National University.