Six electric cars that should come to India 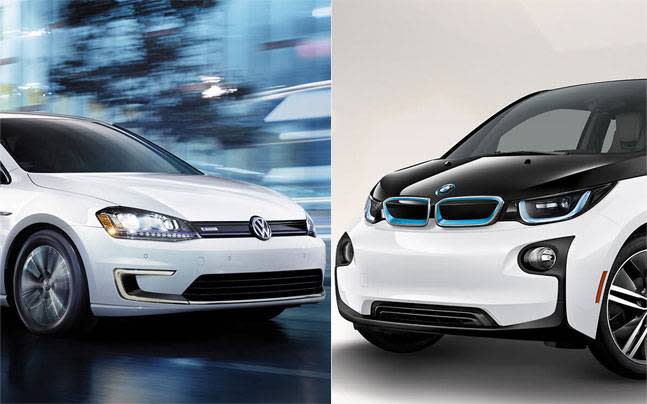 With the rising pollution in the country, more and more automakers are going the eco-friendly way of manufacturing vehicles. Electric vehicles and hybrid cars are the talk of the town with Tesla, Faraday Future, Volkswagen leading the segment with the promise of giving their best back to the environment.

However, India is only at the start of this endeavour with Mahindra, Toyota, Maruti aiming on producing semi-hybrids and electric cars for the Indian market. Although, the main issue related to expanding electric vehicle culture in the country is the lack of infrastructure, we list out 6 electric vehicles that should come to India.

Nissan launched the Leaf electric car in the UK in 2011 and has been the best 100 per cent electric car in the country ever since. With the model’s low maintenance needs and running costs around four times cheaper than that of a conventional combustion engine, it is a better and a cheaper option to own a Nissan Leaf than any other vehicle with petrol and diesel fuels. Till now, Nissan has sold close to 2.30 lakh units of the Leaf electric vehicle around the world. {mosimage}

Nissan Leaf comes with a high-response, 80kW AC synchronous motor that generates 107HP and 253NM of torque. Along with the 160km plus range, the 30 kWh battery can be quick-charged to 80 per cent (from the low battery charge warning) in about 30 minutes. Charging on a home charging system (Level 2, 240V) is estimated to take about six hours with the 6.6 kW onboard charger.

Volkswagen presented the latest generation of the e-Golf in a world premiere at the Los Angeles Auto Show in November, and compared to its predecessor, the new zero-emission vehicle offers more power, longer range and more features. The e-Golf will now cover up to 200 kilometres or more in everyday driving on one battery charge. {mosimage}

Volkswagen is employing a new lithium-ion battery whose energy capacity has been increased from 24.2 kWh to 35.8 kWh. The battery can be charged to 80 per cent capacity within an hour at a CCS charging station (DC, 40 kW). When charged overnight or during the work day from a wall box (AC,7.2 kW), the battery is ready to go again with 100 per cent capacity in less than six hours. The electric motor now develops 100 kW, which is 15 kW more power than the first version of the e-Golf. At the same time, the maximum torque of the electric motor has been boosted from 270 Nm to 290 Nm.

Beat EV is powered by an advanced electric motor and battery system. It consists of a GM-designed, coaxial drive unit and electric motor that together deliver 130 hp and 542 Nm of torque for instant acceleration; and a more than 20-kWh lithium ion battery is expected to provide among the best EV range performance in its segment.

The BMW i3 is the world’s first premium car designed from the ground up to be powered by an electric drive system. {mosimage}

The BMW i3 94Ah replaces the current 60Ah model and has a capacity of 33kWh thanks to the higher storage density of the lithium ion cells. This equals a range of 313km in everyday driving. The motor propels the BMW i3 from zero to 100kmph in just 7.3 seconds (BEV) making the BMW i3 both the sportiest and most efficient electric vehicle in its segment. The hybrid synchronous electric motor, developed and produced specially for use in the BMW i3, generates an output of 170hp and provides maximum torque of 250Nm from the moment the car pulls away.

Hyundai Motor Company announced the introduction of the Autonomous IONIQ concept during its press conference at Los Angeles Auto Show. With a sleek design resembling the rest of the IONIQ line-up, the vehicle is one of the few self-driving cars in development to have a hidden LiDAR system in its front bumper instead of on the roof. {mosimage}

The IONIQ is available with three powertrains: electric; plug-in gasoline/electric hybrid; and gasoline/electric hybrid. The IONIQ Hybrid is equipped with a newly developed, dedicated 1.6 GDI four-cylinder Kappa engine and a 44 PS electric motor, which is fed by an advanced Lithium-Ion polymer battery. The two powertrains have combined maximum output of 141 PS and 265 Nm of torque. A new six-speed dual-clutch transmission provides responsive performance and a slick gear shift, resulting in an entertaining drive, and good fuel economy.

On March 31, when Elon Musk, CEO and product architect of Tesla Motors, introduced the model 3 electric sedan to the world. Musk hinted that the company also has plans to bring in the all electric Model 3 sedan to India. The EV manufacturer had said that it aims to enter more markets with the Model 3, namely- India, Brazil, South Africa, Slovakia, New Zealand, Singapore and Ireland. {mosimage}

The Model 3 will be Tesla’s most affordable electric car at $35,000 (Rs 23 lakh approx) and its deliveries will start at the end of 2017. The car is said to reach a speed of 60 miles per hour in just 6 seconds. The car will have a range of 346 km on a single charge, and there will be versions of the cars which have an even better range. The Model 3 is rear wheel drive and it also incorporates elements like the 15-inch touchscreen panel in the middle of the dashboard which acts like the main hub for navigating functions of the car, including the infotainment system and the maps.