The PM, the Hon. Dr Timothy Harris (pictured with Mr Mazumdar), heard about the changes and new strategies implemented by Mr Mazumdar, who took the helm in August last year, with the aim of improving the safety and promoting the flag worldwide to be a flag of choice for ship owners. The CEO also met Foreign Minister the Hon. Mark Brantley and both ministers were said to be excited by the possibility of a Maritime University being established on the islands in the future. 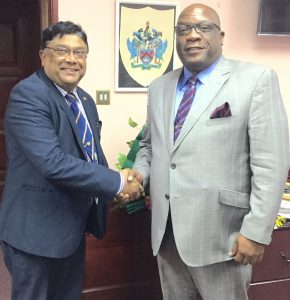 Since Mr Mazumdar joined, SKANReg has established Maritime Registrar’s offices in Mumbai and Kolkata in India, Istanbul in Turkey and Hong Kong, where it recently held an official flag launch at the Marine Club attended by many top maritime executives.

“Our presence at the Asia Pacific Exhibition in Singapore also got us 36 new build vessel orders which are being registered now through our Singapore Maritime Registrar,” said Mr Mazumdar. 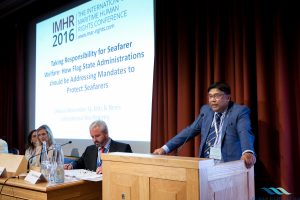 SKANReg also participated with a stand in the Seatrade Maritime Middle East Exhibition last month and attended the first ever International Maritime Human Rights Conference in London in September where Mr Mazumdar was a speaker (pictured).

The Registry has also invested in a new IT system and computers Mr Mazumdar says this will improve efficiency by 50%.

Future plans for the Registry include mandatory flag state inspections on high risk vessels from January 2017 to raise safety standards and Water Ballast Management procedures have been drafted and are being sent to flag-approved classification societies for implementation. China Classification Society has been newly appointed as a full member for SKANReg.

“After completing a year in SKANReg as CEO, I feel happy to see the Registry move forward with active participation of our experienced staff,” said Mr Mazumdar.
Source: SKANReg