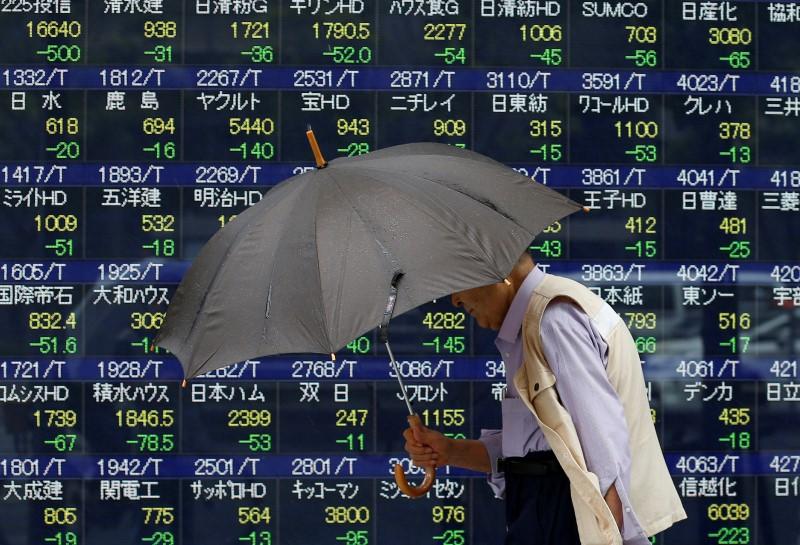 A pedestrian holding an umbrella walks past a stock quotation board outside a brokerage in Tokyo, Japan, June 13, 2016.

HONG KONG Sterling rose and Asian stocks crept higher in cautious trade on Thursday though many investors sought shelter in safe-haven assets such as the yen and government debt as they braced for Britain’s vote on its fate in the European Union.

Sterling climbed to a six-month high against the dollar, cementing an impressive 6 percent rise since last week as investors squared short positions ahead of the referendum later in the day.

European stocks are expected to open flat to slightly higher.

While two opinion polls published late on Wednesday, a few hours before voters were due to begin to cast their votes, showed the “Remain” camp nudging ahead in the closely divided campaign, trading activity in Asian hours remained erratic, thin and cautious.

MSCI’s broadest index of Asia-Pacific shares outside Japan rose 0.2 percent. Many markets in Asia were flat to slightly negative with China’s main index among the biggest losers. Japan’s Nikkei was a notable exception with the market up nearly 1 percent.

“Most people at this point expect a rise in the market” on expectations the vote will favour Britain staying in the EU, said Isao Kubo, an equity strategist at Nissay Asset Management.

“But you never know, and it will be clear by tomorrow so you don’t want to take new positions now.”

Various market volatility indicators edged higher in the run-up to the referendum. A volatility gauge for the Hong Kong stock market has climbed to more than 25 compared with around 18 at the end of December while the more popular VIX index approached its highest levels seen this year.

Investors remained largely on the sidelines ahead of the referendum as a closely fought vote meant any large positions taken before the outcome was vulnerable to being stopped out. A Bank of America Merrill Lynch fund manager poll last week found investors’ cash levels at their highest since November 2001.

Some investors such as George Soros expect the value of the British pound to decline by as much as 15 percent from current levels in the event of a British exit from the EU.

The demand for the perceived safe-haven yen remained broadly intact with the dollar adding just 0.2 percent to 104.63 yen, while the euro gained 0.6 percent to 118.67 yen.

“It will be hard for the market to move until the poll results are released. The pound obviously will take centre stage. But other European currencies and particularly dollar/yen also bear watching as the pair will reflect swings in risk sentiment,” said Shin Kadota, chief Japan FX strategist at Barclays in Tokyo.

Before the vote, exchanges and market regulators moved in to tighten risk management systems. Singapore’s stock exchange said it has raised the amount of cash firms must pledge to cover trading positions while central banks stood by to pump in emergency cash.

Crude oil prices rose after settling down more than 1 percent on Wednesday, after the U.S. government reported a smaller-than-expected inventory drawdown.