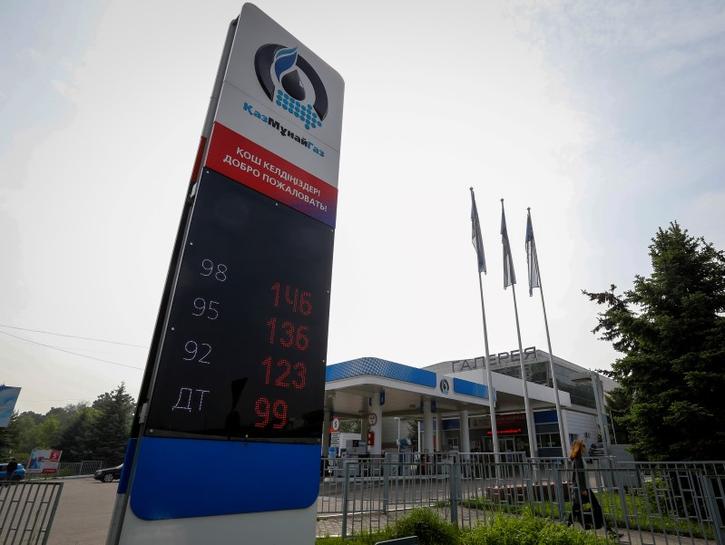 Fuel prices are displayed at a Kazakh state-owned oil and gas company KazMunayGas gas station in Almaty, Kazakhstan, May 4, 2016.

SINGAPORE Brent crude oil prices rose on Monday, lifted by a plunge in the dollar that could spur demand just as attacks on Nigerian oil infrastructure tighten supplies, but signs of recovering U.S. output capped gains.

Traders said oil prices rose on a sharp fall in the dollar .DXY on Friday after weak U.S. jobs data sparked concerns over the state of the world’s biggest economy, cutting expectations of a near-term cut in U.S. interest rates.

A weaker dollar supports fuel demand in the rest of the world as it makes dollar-traded oil imports cheaper.

The Muslim holy month of Ramadan starts on Monday and is seen as supportive of prices as driving demand picks up in most Muslim dominated countries.

Traders said prices were also propped up by attacks on oil infrastructure in Nigeria, which has already pulled the country’s output to over 20-year lows and which rebels said could fall to zero soon.

So far, supply cuts like those in Nigeria or Libya, have been met by rising output in the Middle East, especially Iran, which has been ramping up its output following the end of international sanctions against it in January.

But Iran’s is returning to international oil markets more quickly than expected – including using international tanker operators to ship its crude – and is fast hitting its maximum capacity.

This means that further disruptions in global supplies might not be compensated by rising Iranian output.

The price rally, however, was capped on signs of increased output.

Drillers added nine oil rigs in the week to June 3, bringing the total rig count up to 325, compared with 642 a year ago, Baker Hughes said in its closely followed report.

“While not enough to materially change the outlook for U.S. production … there are some early signs that rigs may be returning in the best acreage, namely the Permian Basin,” Morgan Stanley said.

U.S. crude oil production has fallen by 5.4 percent since January and by almost 10 percent since mid-2015 to 8.74 million barrels per day.