Tankers: What’s Next for Aframaxes as Segment is Looking to Deal with Oversupply Issues?

With 75 tankers of the Aframax class looking likely to enter the global fleet in 2018, on top of the 67 LR2/Aframax ones already entering into the global fleet this year, it seems that tonnage oversupply could plague the market for the years to come. What about demand though? In its latest weekly report, shipbroker Gibson noted that “crude exports out of the Former Soviet Union (FSU) are one of the biggest demand drivers for the Aframax market in the Atlantic Basin. The significance of regional trade has been further boosted by the decline in Aframax shipments in the Caribbean and in the North Sea. Strong gains in FSU seaborne crude exports were seen in 2015/2016 and trade continued to increase this year despite OPEC led production cuts, being driven by rising crude exports through the CPC terminal in the Black Sea. CPC exports averaged over 1.15 million b/d between January and October 2017, up by 250,000 b/d versus the corresponding period last year, following the start-up of the giant Kashagan oil field in the Caspian Sea. There also have been some modest gains in Russian exports of its Arctic crude, which more than offset a minor decline in crude shipments in the Baltic”. 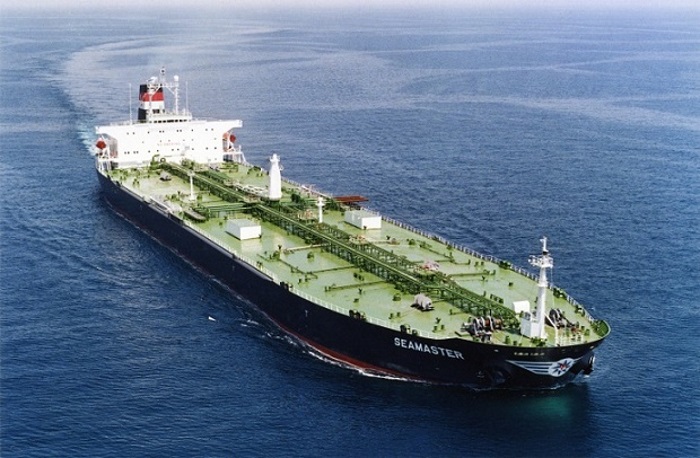 According to Gibson, “next year there is potential for further growth in volumes lifted from the CPC terminal. The Kazakh energy ministry expects to see another 120,000 b/d gain in Kashagan output, which suggests the country is unlikely to meet its production pledge under the Opec/non-Opec output deal. The picture could be different when it comes to Russia. According to Argus Media, the expansion of the ESPO pipeline branch, that runs through Heilongjiang province in China to Dalian, is nearly complete. This project will increase the ESPO blend shipments through the spur from 320,000 b/d currently to around 600,000 b/d next year. If Russian crude production and refinery throughput are being maintained next year at similar levels relative to those seen in 2017, exports through other established routes are likely to decline. Taking into account Russia’s ambition to grow trade volumes with its Asian partners and significant oil backed loans with China, seaborne exports from the Kozmino terminal on the Russian Pacific coast are unlikely to witness a major decline. This clearly puts under threat shipments from the West, particularly seaborne, as flows through the Druzhba pipeline are mostly committed to refineries, for which it is challenging to find an alternative supply source”.

The shipbroker adds that “if there is indeed a decline in Russian crude exports out of the Baltic and the Black Sea ports, it will be another piece of bad news for Aframaxes, plagued by rapid supply growth. This year 67 units in the LR2/Aframax size group have been delivered and another 75 tankers are scheduled for delivery in 2018. Considering weak demand prospects and rapid fleet growth, it is unlikely the sector will see a notable improvement in freight levels anytime soon. In the longer term, continued growth in world oil demand and the eventual phase-out of the production cuts will aid demand for tonnage. On the supply side, the Ballast Water Treatment (BWT) regulation and the introduction of global 0.5% sulphur limit in 2020 also offer structural support, with promise of stronger demolition activity and with it, slower fleet growth. The prospects for intense demolition post 2020/2025 are particularly strong in the ice class Aframax segment, where over 60% of fleet are within the 11 to 15 year old bracket. Ice class tonnage is more expensive to run due to higher bunker consumption and as such, following the implementation of the BWT and global sulphur cap, these units are likely to come under additional downwards pressure and so could exit trading operations prior to their natural retirement age”, Gibson concluded. 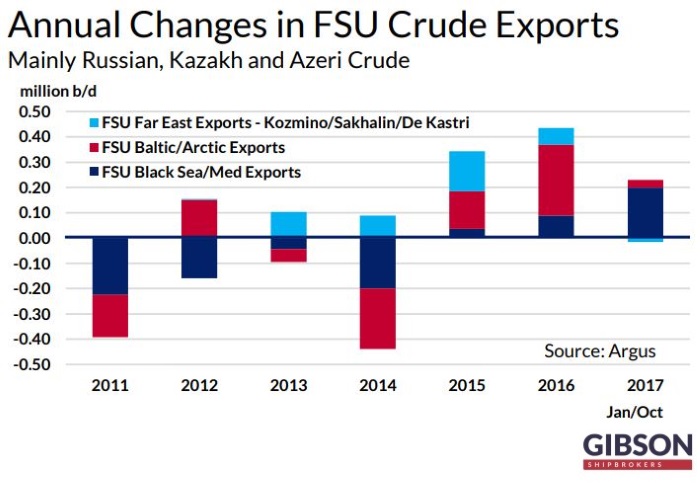 Meanwhile, in the crude tanker market this week, Gibson said that “VLCC Owners resisted further falls and then managed to claw back a little lost ground as Charterers moved to mop up remaining December positions. Rates for the most modern units broke through the ws 50 barrier to the East, but more challenged units still had to accept little better than ws 45 with runs to the West moving again in the low/mid ws 20’s. The January programme will be in hand from early next week and Owners will be hoping for pre-Holiday momentum to help out, and counter ongoing easy availability. Suezmaxes started with hope, but then had to settle for a rather non-descript back half to the week with rates easing towards ws 85 East and into the high ws 30’s West with little change anticipated over the near term. Aframaxes put a handbrake on recent retreat and a busy week allowed Owners to propel rates to 80,000mt by ws 130 to Singapore with a continuation of that over the next phase likely”.
Nikos Roussanoglou, Hellenic Shipping News Worldwide

Previous قل ولا تقل!
Next Equinix : to Extend Market Leadership in Australia through Acquisition of Metronode