While most U.S. businesses would pay lower taxes under congressional Republicans’ proposed tax overhaul, some of the world’s richest technology companies might actually see their rates rise.

A window into how Microsoft Corp. currently pays a disproportionately larger portion of its taxes overseas shows how the legislation could offset the benefits of returning cash home.

The software giant saves billions of dollars in taxes by holding software licensing rights at facilities in Puerto Rico, Ireland and Singapore, where it stockpiles profits and pays low foreign rates. Puerto Rico, while a U.S. territory, is treated as a foreign country under current tax law.

The proposed law lowers the corporate tax rate to 21% from 35% but at the same time puts a minimum tax on profits overseas. That setup would likely force Microsoft to pay a minimum 10.5% tax on future offshore profits, removing some of the benefit from the company’s offshore facilities, tax experts say. Yet, Microsoft and other tech giants could still have an incentive to shift profits abroad.

Microsoft doesn’t disclose its foreign tax rates. But it does say it would owe about 32% if it repatriated all foreign profits.

The statutory tax rate, including state taxes, is between 35% and 39%, suggesting Microsoft has paid between 3% and 7% in tax on the company’s foreign profits.

Tech executives and industry groups largely support the tax package, partly because it promises a one-time tax at a discounted rate for the estimated $2.6 trillion in profits American businesses have accumulated overseas—a rate of 15.5% on liquid cash or 8% on illiquid assets, including factories and equipment. Companies currently pay as much as 35% to bring back some of that cash to pump into operations or return to investors.

But tech giants could be pinched by provisions in the new tax code aimed at curbing the use of low-tax foreign jurisdictions. “Those firms that have been the world leaders in avoiding taxes will find their tax rates going up,” said Edward D. Kleinbard, a former U.S. tax official who is now a tax professor at the University of Southern California law school.

Under current law, American companies owe the U.S. taxes of as much as 35% on world-wide income. They get tax credits for payments to foreign countries, and don’t owe the U.S. the remainder immediately. But they face the residual U.S. tax if they repatriate profits.

So companies book profits in low-tax countries, and leave them there. This is easy for high-tech and pharmaceutical companies, which put so-called intangible assets, such as patents, in foreign countries and book non-U.S. profits through there.
That is why most tech companies pay a much lower effective tax rate than the standard 35% for American businesses. Tech firms paid an average tax rate of 24% over the 10-year period through 2016, below the 29% average tax rate for all companies in the S&P 500 for that period and lower than any other industry, according to an analysis of corporate filings by Zion Research Group. 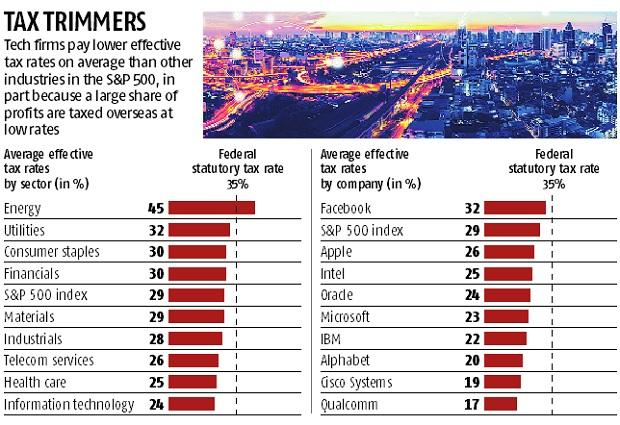 U.S. companies with the lowest tax rates include tech firms such as eBay Inc., Cisco Systems Inc. and Alphabet Inc., whose effective tax rates averaged under 20% over the past decade, filings for all three companies show. Microsoft’s average effective tax rate was 23.3% over the 10-year period through 2016.
Microsoft opened its first Puerto Rico facility in 1991 after the U.S. established a tax break on new businesses there. The island subsidiary buys the rights to Microsoft’s intellectual property, makes copies of its Windows and Office software and sells that software to the company’s North American distributors, according to the findings of a U.S. Senate investigation into corporate tax maneuvers in 2012.
“The structure is not designed to satisfy any specific manufacturing or business need,” the Senate investigators wrote. “Rather, it is designed to minimize tax on sales of products sold in the United States.”
The Puerto Rico facility was previously used to produce physical copies of software discs. In recent years, Microsoft’s business model has shifted to digital subscriptions, a change that could let it shift more sales to the U.S., according to Bernstein Research. Under the existing tax regime, Microsoft can keep 47% of profits in Puerto Rico, where it is taxed at a prenegotiated rate of 2%.

The company also reduces its tax liability through similar intellectual-property arrangements in Ireland and Singapore. Those two countries, together with Puerto Rico, accounted for 64% of Microsoft’s income before taxes in the year ended June 30. In the same period, about half of its revenue was in the U.S.

Microsoft could bring cash home after the tax law is passed without much penalty beyond the initial one-time tax on accumulated foreign profits. The company keeps 95% of its cash, or $132 billion, outside of the U.S., a larger offshore cash pile than any company except Apple Inc., which holds 94% of its cash, or about $252 billion, overseas. Microsoft has actively lobbied lawmakers on tax-code changes, paying at least 18 lobbying firms to work on the issue this year, according to Senate records.

What is less clear is whether the tax changes would give Microsoft enough incentive to stop sending profits to places such as Puerto Rico. Representatives from the U.S. territory have voiced concern that a tax-policy change could push companies out of Puerto Rico and further hurt its economy as it recovers from hurricanes and a debt crisis.