Ten sailors missing after US destroyer collision off Singapore 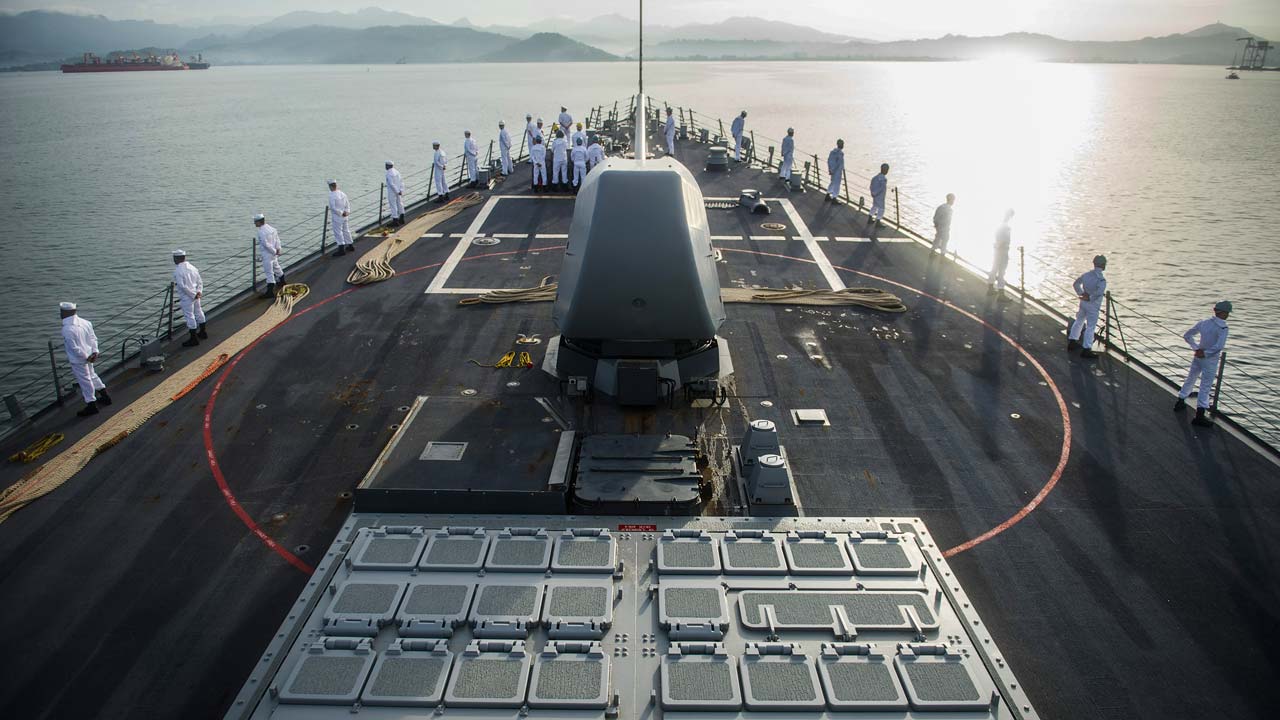 This image obtained from the US Navy, sailors assigned to the Arleigh-Burke class guided-missile destroyer USS John S. McCain man the rails as the ship prepares to enter port in Subic Bay, Philippines, on June 26, 2014. Ten sailors are missing and five injured after the McCain collided on August 21, 2017, with a tanker east of Singapore, the US Navy said. “There are currently 10 sailors missing and five injured,” said the navy in an update on the collision between the destroyer and the merchant vessel Alnic MC. Alonzo M. Archer / US NAVY / AFP

Ten US sailors were missing and five injured Monday after their destroyer collided with a tanker east of Singapore, in the second accident involving an American warship in two months.

The guided-missile destroyer USS John S. McCain collided with the merchant vessel Alnic MC near the Straits of Malacca in the early hours, the US Navy said.

“Initial reports indicate John S. McCain sustained damage to her port side aft,” it said in a statement as the ship headed to port in Singapore.

“There are currently 10 sailors missing and five injured… Search and rescue efforts are underway in coordination with local authorities.

“The extent of damage and personnel injuries is being determined. The incident will be investigated.”

The navy said the destroyer was sailing under its own power after the collision with the Liberian-flagged tanker in Malaysian waters at 5:24 am (2124 GMT Sunday) as it headed for a routine stop in Singapore.

The vessel is named after US Senator John McCain’s father and grandfather, who were both admirals in the US navy.

McCain said in a tweet that he and his wife “are keeping America’s sailors aboard the USS John S McCain in our prayers tonight — appreciate the work of search & rescue crews”.

President Donald Trump initially said “that’s too bad” in response to reporters’ shouted questions about the collision, as he arrived back at the White House after a holiday.

He followed up with a Tweet: “Thoughts & prayers are w/ our @USNavy sailors aboard the #USSJohnSMcCain where search & rescue efforts are underway.”

It was the second collision in recent times involving a US warship after seven sailors died in June when the destroyer USS Fitzgerald collided with a Philippine-flagged cargo ship in a busy channel in Japan.

After the latest incident Monday, a major search and rescue operation was launched, with planes and vessels from Singapore, Malaysia and the US involved.

The collision happened off the southern Malaysian state of Johor. Zulkifli Abu Bakar, head of Malaysia’s Maritime Enforcement Agency, said a total of eight ships from different Malaysian agencies had been deployed and one plane and helicopter were about to be sent out.

“They are already out there, they have already arrived,” he told AFP.

The rescue operation also involved tug boats, a helicopter and a police coast guard vessel from Singapore, and US aircraft were responding, the navy said.

The ship involved in the accident is a Liberian-flagged tanker used for transporting oil and chemicals and weighing over 30,000 tonnes, according to industry website Marine Traffic.

In the June accident, the collision happened in a busy channel not far from Yokosuka, a gateway to container ports in the Japanese capital Tokyo and nearby Yokohama.

The dead sailors, aged 19 to 37, were found by divers in flooded sleeping berths a day after the collision tore a huge gash in the side of the Fitzgerald.

A senior admiral announced last week that the commander of the destroyer and several other officers were relieved of their duties aboard their ship over the incident.

There have been around 30 ship collisions over the past decade in that area, including a 2013 incident in which six Japanese crew died, according to the Japan Coast Guard.

The USS John S. McCain is part of the US Seventh Fleet, and its home base is Yokosuka, in Japan.