The American who wants to be Chinese 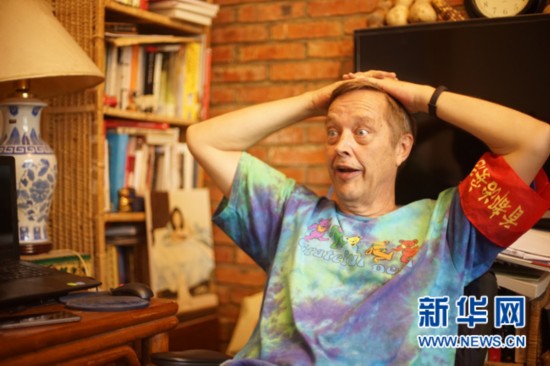 Wearing his bright red armband and speaking fluent Mandarin, from a distance 62-year-old Gao Tianrui could be taken for any regular Chinese man. But on closer inspection, things are not quite what they seem: Gao’s real name is Terry and he is American.

Having lived in Beijing for more than 20 years, Terry Crossman has finally fulfilled his Chinese dream: becoming a public security volunteer. Life as a Xicheng Dama (elderly woman of Xicheng) has even made him an online celebrity.

Xicheng Dama are volunteers, usually women in late middle-age, who roam the streets of downtown Beijing’s Xicheng district. And now Crossman has joined their club.

In video footage that recently went viral, Crossman said that he initially saw the dama as busybodies, but his mind changed once he was on the inside.

“Gradually I saw that it is a good thing for retired seniors to come out and help others,” he says.

In the footage, he is seen giving tourists directions, getting water for a baby and even helping a neighbor sell yogurt.

“I like helping others,” he says. “I live in the hutong and my neighbors and I usually help each other … This is where I live, where my friends are and where I call home.”

Crossman became interested in Chinese culture as a teenager when he read the “Tao De Ching” by Laozi, and self studied the “I Ching.”

At 18, he took a cargo ship to Taiwan to learn Chinese. On the ship the captain suggested that he should have a Chinese name.

“He named me Gao Tianrui, based on the pronunciation of my English name,” he said.

After Taiwan he worked in several places, including New York, Singapore and a 12 year stint in Hong Kong.

Crossman first came to the Chinese mainland for a period in 1981, when he went to Shanghai and Suzhou in eastern Jiangsu Province.

His first visit to Beijing was six years later on business.

“There were few cars and lots of bicycles on the road, and many people were wearing the Chinese tunic suit.”

Crossman and his family moved to Beijing permanently in 1997, when the traffic was heavier and city busier.

“There were only two subway lines, with no air-conditioning,” he says.

Since then he has continually worked and lived in Beijing, and has gone through most of the ups and downs of a regular Beijinger.

In 2003 during the outbreak of SARs many people fled the city, but he was not worried.

“With empty roads, the traffic was better,” he says.

Despite feeling like a local of the city, he was not even able to get a ticket to attend the 2008 Beijing Olympic Games, which annoyed him.

His parents separated when he was young, and they moved to many different places in America, so he never felt like he had a regular home there.

“I had no hometown in the United States,” he says. “Your home is where your things are. In this sense, Beijing is my home.”

He can often be found chatting with the locals, especially taxi drivers.

“I am more familiar with the life of taxi drivers than most Beijingers,” he says, proudly. “When I see their license number, I can tell how many years they have worked.”

With the taxi drivers, he cannot resist talking about politics, sport and the economy.

“They are so knowledgeable,” he says. “I learned many Chinese NBA words from them.”

During his leisure time, Crossman teaches local people English. Currently he is helping staff at a Starbucks near his home, telling them how to say useful words such as “set meal” and “discount.”

Crossman met Liu Xiaoxia in March. Liu is in charge of a volunteer organization named Lanlifang (Blue Cube) and helped Crossman get into volunteering.

“I was afraid of foreigners in the past because some of them had a bias against China,” Liu says. “Lao Gao was different. He is warm-hearted and jovial.” She calls Crossman Lao Gao, his Chinese nickname.

Liu was making a video to promote her organization, and invited Crossman to join in. He agreed, gladly.

From then on, Crossman decided to become a volunteer.

“He asked me to give him a red armband,” Liu says. The armband is the symbol of the volunteers, and Crossman is very proud of his.

“If I become a volunteer, I can make more friends,” he says. “I feel special with the armband.”

However, the seemingly carefree Crossman had one big problem: his visa expired and his company no longer had an office in Beijing. He could no longer get a work visa.

To solve the problem, Crossman applied for a student visa while enrolling himself in a Chinese language course. But the visa will expire in September, and he is thinking about what to do.

One thing is for sure: Crossman does not want to leave Beijing.

When Crossman first came to Beijing there were just two subway lines, by the end of 2016 the city was home to 18 subway lines with 288 stations.

So, does he like the new Beijing or the old one? Crossman finds it hard to tell.

“In different periods I had different lives: married life, life with the children and life alone,” he said. “Now I just enjoy living here.”