The boats, 13 from Vietnam and 10 from Malaysia, were captured for fishing illegally in the country's water. 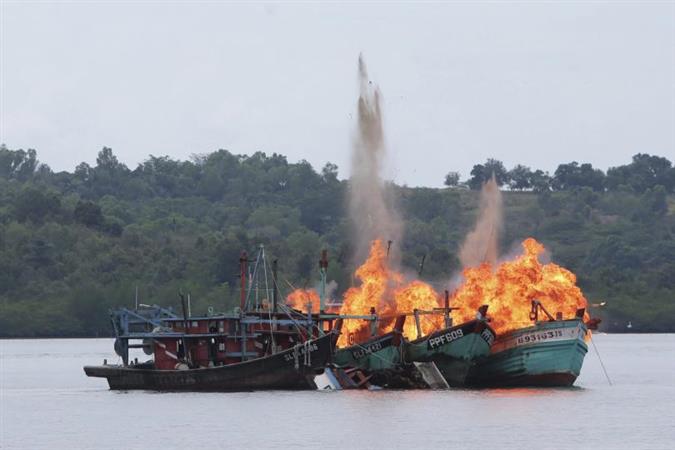 Indonesian authorities blew up 23 foreign vessels that were captured for fishing illegally in the country’s water.

The boats, 13 from Vietnam and 10 from Malaysia, were blown up simultaneously in seven ports from Tarakan in northern Kalimantan to Ranai on the Natuna Islands in the South China Sea.

Minister of Maritime Affairs and Fisheries Susi Pudjiastuti witnessed the destruction, which was coordinated by the navy, coast guard and police, via live-streamed Internet video at her office in downtown Jakarta.

Pudjiastuti has overseen the capture of nearly 200 illegal fishing boats from several countries after declaring a fishing moratorium for foreign vessels.

A total of 174 illegal fishing boats have been blown up. The fates of 20 others await court rulings.

Last month, Indonesia destroyed the Nigeria-flagged Viking with explosives. The ship was wanted around the world for illegally taking toothfish from southern waters.

It was seized by the Indonesian navy on February 25 while operating in waters south of Singapore.

Previous What happens when a social network pays for content?
Next West has double standards on climate change, says Goyal