The Inequality of Happiness

The World Happiness Report, that annual-ish ranker of the world’s chillest, smiliest, most satisfied countries (a contest in which Scandinavia regularly kicks the rest of the world’s teeth in), this year added a new dimension to its analysis: Inequality.

Normally we talk about inequality in terms of economics, disparities in income, the wealth of the 1 percent versus the wealth of the remaining 99, etc. But in this case “inequality” was a measure of the distribution of people’s answers to this question:

But when the researchers looked at how people’s answers were spread out, a different picture emerged. Here is the distribution of answers across the whole world: 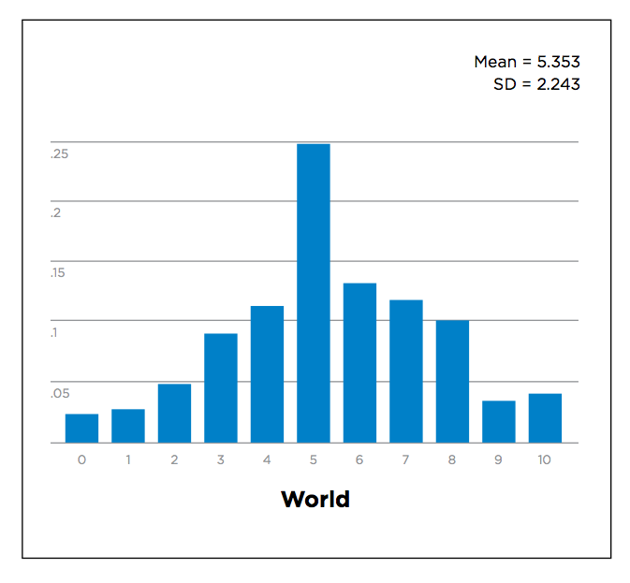 The most common answer is five, dead in the middle. In different regions however, answers are distributed differently.

Population-Weighted Distributions of Happiness, by Region 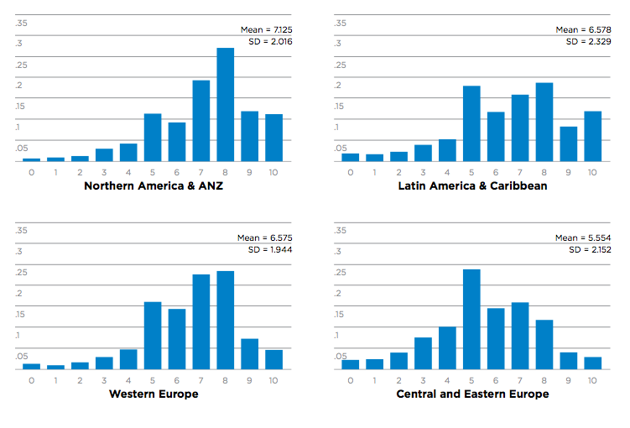 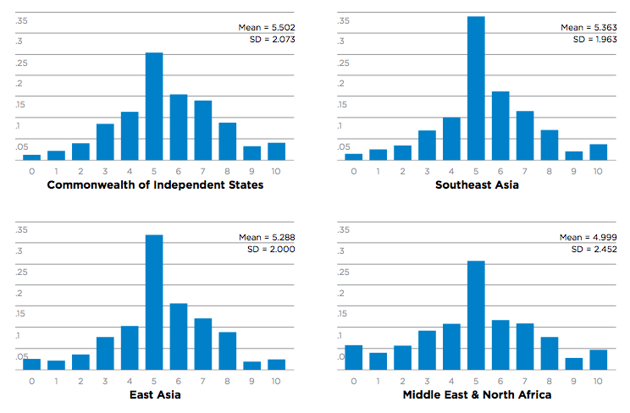 The top five most equal countries when it comes to happiness are Bhutan, Comoros, the Netherlands, Singapore, and Iceland. (Iceland being the only one in the top 5 for both average happiness and equality.) The five most unequal countries are Honduras, the Dominican Republic, Liberia, Sierra Leone, and South Sudan. The United States is in 85th place.

This isn’t a perfect measurement of a country’s well-being. For example, Afghanistan is the ninth most equal country, but the fourth-lowest in terms of overall happiness. The Afghans, it seems, are pretty equally unhappy.

Looking at the regional charts above, John Helliwell, a professor of economics at the University of British Columbia and one of the editors of the World Happiness Report, observed a couple different kind of inequalities.

“In Latin America and the Caribbean, well, everybody’s happy, but they’re not equally happy, there’s quite a spread among positive answers,” he says. “But you look on the other hand at the other region that’s very unequal, that’s the Middle East and North Africa, and you can see it’s got a whole lot of people down at the zero and a quite a lot of people up at the ten. So there are some very happy people and very unhappy people there.”

So happiness inequality, at least as measured here, is not a “tell-all measure,” Helliwell says. “You have to look a little further to find out what is the nature of the inequalities.” 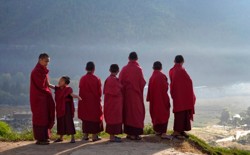 This is one of the first times that anyone has attempted to measure happiness inequality or well-being inequality. One previous study, published in 2008, found that happiness inequality went down overall in the United States between 1972 and 2006. But it used a slightly different measure than the World Happiness Report, instead asking participants whether they were “very happy, pretty happy, or not too happy,” so it’s hard to directly compare the two. It’s also notable that the time period of this study ends just before the Great Recession.

There are a lot of remaining questions—for example, how closely does happiness inequality correlate with income inequality? In a separate paper on well-being inequality, Helliwell and his colleagues write, “A high inequality society … is one in which there are many people who achieve a life they rate very highly, and many others who are stuck in a life they are very much dissatisfied with. This could be because the former are rich, and the latter poor, but it could also be for any number of other reasons.”

Future attempts to measure happiness inequality could possibly use some tweaks to clarify what those reasons might be.

Emiliana Simon-Thomas, the science director of the Greater Good Science Center at the University of California, Berkeley, says that the World Happiness Report’s inequality measure, because it looks at satisfaction with life, “is a little bit more tightly tied to access to resources.” A fuller picture, she thinks, would include more information about people’s “capacity to experience positive emotions and to recover from negative emotions.”

“The reason well-being falls into this space of equality is because it is about our ability to exist in collectives without harming one another.”

But the measure still illuminates an important thing to consider when thinking about the well-being of populations.

“If all we’re focusing our policy on is achieving income equality, we’re losing an opportunity to focus on other aspects of life that are important to well-being,” Simon-Thomas says—things like “community, and connection, and kindness … The reason [well-being] is falling into this space of equality is because it is about our ability to exist in collectives without harming one another, without having extreme differences in opportunity or access to resources.”

Another unanswered question: What does it mean for a country to be unequal when it comes to happiness? What does that kind of society look like? Refining the measures and including more variables could tell us more in the future, but for now we have to speculate.

Shigehiro Oishi, a professor of psychology at the University of Virginia who studies well-being and culture, sent me some thoughts over email. “I guess the society where some are really happy and others are really unhappy would look like the winner-take-all society (high-income inequality),” he wrote, “but also highly corrupted and unfair (i.e., not just economically unequal, but politically unequal; some elites are protected, others are not; fundamentally non-meritocratic, unfair society).”

Though it didn’t necessarily play out for all countries, the World Happiness Report researchers found that generally, lower happiness inequality was correlated with a higher average happiness score, suggesting that more equal societies are happier, on the whole.

“Humans evolved in a social context that makes us prefer fairness,” Simon-Thomas says. “When we exist within a context where unfairness is prevalent, that is inherently stressful.”