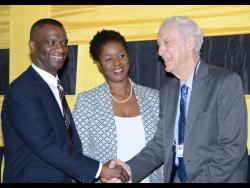 The Mico University College is in line to host a first-of-its-kind international mathematics summit by the middle of next year, according to Pro-Vice Chancellor Professor Neville Ying.

The proposed summit could take place as early as April 2019 and will seek to bring together mathematics teachers from across the world, but notably, those from Japan, Hungary, Russia, Singapore and Finland, which are regarded as “mathematically high-achieving” countries.

“We are at the stage now, where it is important that we make the best use of best practices in the field of mathematics, and there are no other nations that carry more weight in this particular area than these nations,” Ying said.

He was speaking at Wednesday’s press briefing for the launch of Phase Two of the pilot project: International Mathematics Enhancement Programme (MEP) at the Caribbean Centre of Excellence in Mathematics Teaching (CCEMaT), located at The Mico University College. Phase One of the programme ended in 2016.

The Mico is the first teachers’ institution to pilot the project in the Caribbean. The centre will be hosting the project for three years (September 2017-August 2020) to garner insight on how the project impacts the teaching and learning of mathematics at the primary level of the education system.

The project is being piloted in five primary schools across Jamaica, in 15 grade one classes in the academic year 2017-2018. These are the Allman Town Primary School, Clan Carthy Primary, Devon Primary, John Mills Infant, Primary and Junior High and the Mineral Heights Primary School.

The International Mathematics Enhancement Programme was developed by the Centre of Innovation in Mathematics Teaching at the United Kingdom-based Plymouth University.

“The MEP is a vital strategy to get us where we want to go, with the focus on critical thinking. This, along with the new grade-six tests and the new curriculum, will place greater emphasis on what is called 21st century skills and critical thinking,” Benjamin noted.

“There are already 400 teachers attracted to teachers college with a strong focus on maths. Church Teacher’s College also has a large cohort, and by 2019, the system will have significant boost in the cadre of maths teacher in the system,” she said.