The Singaporean singer-songwriter who took Hong Kong to his heart

Singer-songwriter Hanjin Tan stands on a footpath in a rundown industrial estate in Hong Kong, smiling and gazing skyward for the camera. A tradesman holding a beer looks on, clearly bemused by the scene.

Tan has had time to perfect his poses. The Singaporean-born musician, who now calls Hong Kong home, has done everything over the course of his 15-year career from performing live shows and producing songs with big names like Hong Kong singer Eason Chan and American songstress Christina Aguilera to acting in a film about the late martial arts star Bruce Lee.

And the 41-year-old is showing no sign of slowing down. Tan has an album coming out this year, and a coaching role on the inaugural Singapore/Malaysia version of television talent show The Voice, which begins airing next month. He’s already had roles in mainland China’s battle show The Rap of China and Hong Kong’s version of The Voice.

Tan moved to Hong Kong eight years ago to be with his wife, Prima Wong, who he met in popular Lan Kwai Fong haunt Volar.

“I thought she was really cool,” he says, recalling how impressed he had been when she had politely rejected another man who tried to chat her up.

“Our first date was Melinda and Melinda, Woody Allen, I was late. She remembers it. I don’t think I will ever got back from that,” he jokes.

Nowadays, he’s a permanent resident – and he seems right at home in the city.

In a fast-paced tour of Wong Chuk Hang, the area in the south of Hong Kong Island where his studio is based, he takes time to chat with locals in Cantonese and even points out the hotspots, like Yip Fat Street public toilet.

“That’s where the cab drivers go to pee,” he says, pointing at the crumbling building. 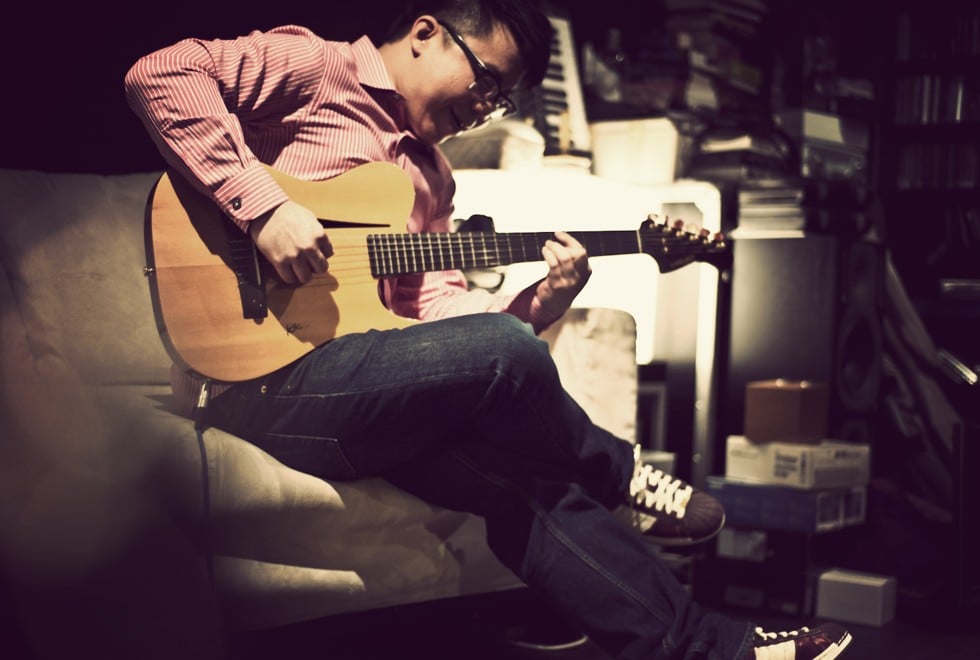 When do you remember getting into music?

The truth is, I don’t remember, I remember from photos. There’s a photo of me on the drum set when I was two maybe. In primary one, the report card said “Hanjin loves to sing but doesn’t have a good voice”. We laughed our arses off, because I guess I was really noisy when I was young.

I started playing guitar when I was 19, and I started playing in pubs all the way until I was 26 [when I graduated from university]. During that period I started writing songs. At that point in time, all I wanted to be was the Red Hot Chili Peppers, U2 and Pearl Jam.

You were diagnosed with a hearing problem as a teenager. How has that impacted your musical career?

There was nothing to overcome because I didn’t have a career when I was 14, or when I was 12. When I was 12, tests showed I had about half the hearing ­capabilities of normal humans. But it didn’t matter because I wasn’t a musician. I was just a student who swam in the very small Singapore national team. I’m sure it does [have an effect on my adult career] but I wouldn’t know, because I never had full hearing.

What do your parents think about your career?

When I was 22, in university, I told my dad: “I have to do this full-time otherwise I won’t get better”. And he was like, “yeah, sure you can do it,” with a tear in his eye. “As long as you’re happy – I mean, the guy sweeping the road is happy.” So I finished my degree [a bachelor of economics at the National University of Singapore]. Now they’re OK. They were OK from the moment I got my Hong Kong Oscar [in the Hong Kong Film Awards in 2011 for his supporting role in Bruce Lee, My Brother].

[They thought] “Oh OK, he’s an actor now, he’s going to be OK.” It’s kind of like if you’re an actor you can make a living. It seems to me they don’t feel so secure knowing their son is a musician. Back then, I was already doing [Hong Kong] Coliseum concerts, and they were still worried. They were not as zen as after the Oscar. They seemed to say a lot less worrying things. [They would say] “son the music is good … as a hobby”. They said that, even when I was a pretty prominent producer already. 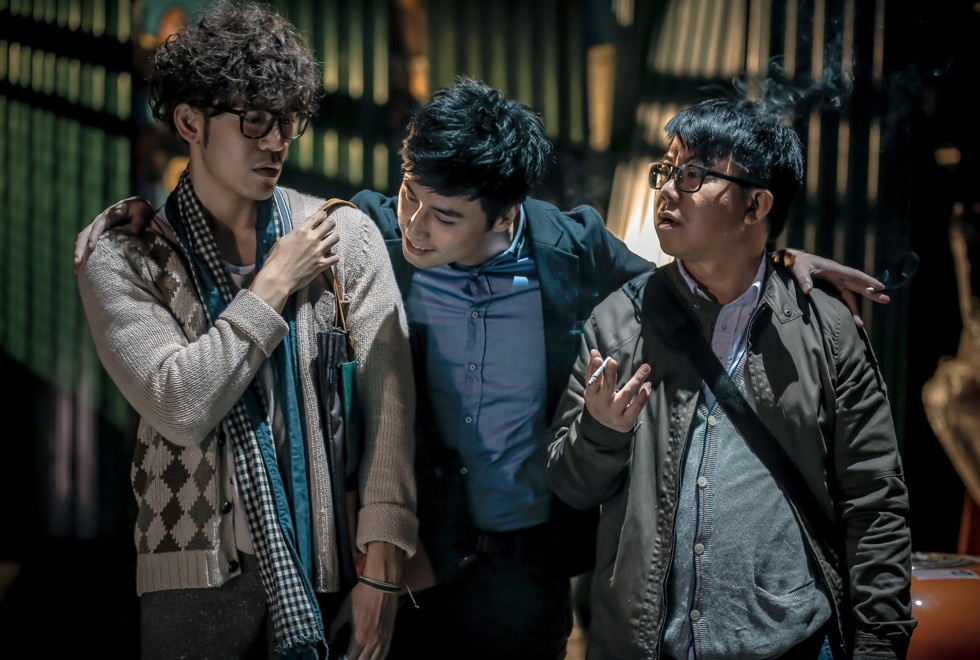 You’ve mentioned before that you struggled to get signed as an up-and-comer in your 20s. Why was that?

The whole point of getting a record deal was that I could do what I wanted to do, on a bigger stage. I played in a pub, I liked that, so I wanted to play on a bigger stage. [Record labels would tell me] oh your image needs to be clearer, maybe you just need to write more songs and we’ll see how it goes. It’s just my face, I’m just not good looking, it’s hard to market. In this part of the world, if you’re not good looking, the record labels won’t pick you up.

You’ve already started filming for the Singapore/Malaysia The Voice. How are you feeling about being on that version and what are you doing to prepare?

Because my name in Mandarin sounds like a changed man, there was an idea that was thrown around that I should become a different person by the end of the season. So I was like, yeah, why not. It’s as good an excuse as any. I don’t know if I’m going to get thin, but my trainer tells me that I’m going to get fit.

It’s awesome, I’ve got to say. It’s a great show, it’s not about amateurs, it’s about singers and giving them a break. Now we’re planning for the battle rounds.

What do you like about living in Hong Kong?

Workwise, Hong Kong is fantastic. Because Hong Kong is a place which is just like Singapore. Whatever sells is king. But in Hong Kong, there are small pockets of crazy people who if you have the good fortune of bumping into, you might be able to create some interesting work, and most of my work is niche work.

Due to the fact that nobody wanted to sign me for the longest time, I would do a lot of indie projects. Hong Kong is great for doing cool stuff. You’ll never be able to make a living off these projects, but they can exist, they can happen. This will not happen in Singapore. 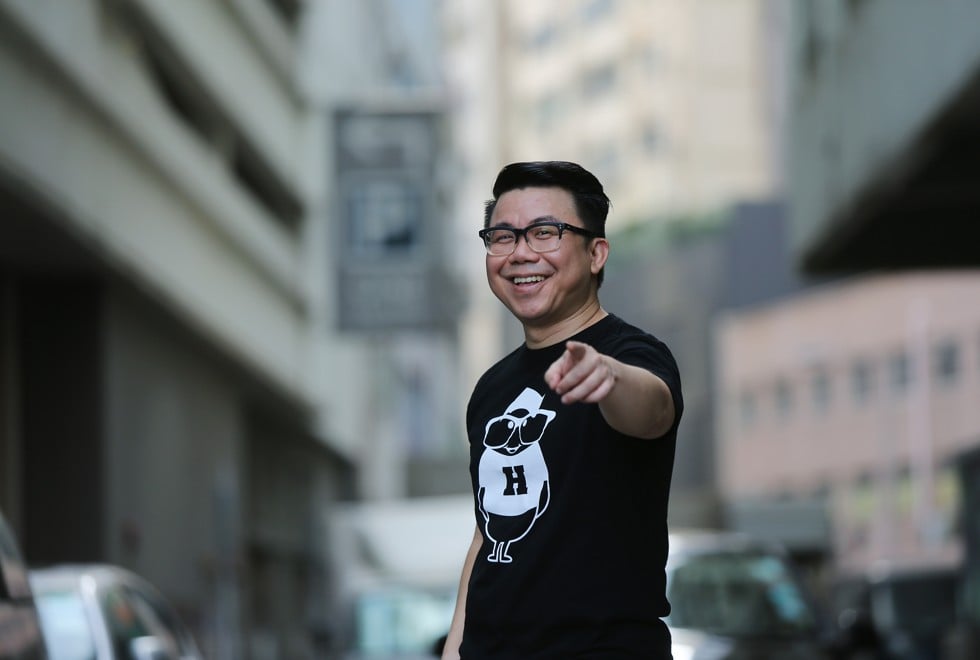 When you were dating your wife, you went back and forth from Hong Kong so often that the immigration officers pulled you aside. How did you feel when they stopped you?

Is Hong Kong a good place to be a musician?

It’s as good as any. Everyone wants to go to the mecca – the mecca now is Beijing. Studios are popping up like mushrooms. Management companies, new record labels with big money. That’s where you should be if you want to do Mandarin music.

What do you like about Hong Kong and Singapore?

How does the level of talent stack up in Singapore, Hong Kong and in places in mainland China?

They’re all good, but they’re quite different. They’re exposed to different music so they have different ­tendencies. Out of 10 guys on the mainland, maybe four guys are really good at hitting high notes, and two or three guys work on a raspy, 80s rock voice. In Hong Kong, everyone is singing ballads. In Singapore, you get a good mixture, it’s like creole. It all gets bashed together. You hear someone sing a Mandarin song with like a Bon Jovi vibe.

Are there any up-and-comers in Hong Kong that you’re really excited about at the moment?

Heaps! When I was at the last Hong Kong Oscar awards [Hong Kong Film Awards], I came outside and chanced upon a local rock festival. The songs that they were writing and playing and the riff they were using were good. Music in Hong Kong is not dead, it’s not dying, it’s just different. And the record industry hasn’t found them yet.

What are the highlights of your career?

The biggest highlight is the Hong Kong Oscars [Hong Kong Film Awards in 2011]. It took the bricks off my mum and dad’s shoulders. So now they’re not worried and are happy, so that’s the most important thing. The second thing is the Coliseum concert. [I kept thinking] if only it would happen – and then it was here. When people ask you where you’re from, what do you say?

I tend to say I’m from Singapore. I tend to think, what’s the colour of my passport. But I’m definitely more familiar with Hong Kong in terms of geography than Singapore right now.

If you were forced to choose between Hong Kong and Singapore, which one would you choose?

I have to pick Singapore, because my mum would be upset if I picked otherwise.

What advice do you wish you’d been given when you were just starting out on your music career?

Quit, while you still have time!

To be Ed Sheeran.

Do you still want to be like the Red Hot Chili Peppers?

I do! Am I still chasing that childhood dream? I still feel like, oh yeah, I want that. I wish for it, but at the same time, I’ve got a lot more scars on my back.

What’s something the public wouldn’t know about you?

I like Earl Grey tea a lot. I drink it as often as I can. I like it with milk – and that’s strange. I used to feel a little bit embarrassed about it, because you usually drink Earl Grey on its own.

I like the sweet and sour crispy pork, I like chicken, I like fried veggies with garlic. You can fry anything with garlic and I’ll be happy.

If you could invite three celebrities over for dinner, who would you choose?

They will come if I invite them? Gandhi, my parents and my brother, and my grandmother if possible.

Do you have any pets?

I don’t have pets, but I have a lot of stuffed toy animals. Maybe over 100. All kinds, collected over the years.

What do you like to do in your spare time?

Who is your celebrity idol?

It’s unmentionable. The craziest mentionable thing is to actually believe that I can go from 82kg to 68kg between now and the 15th of December. It’s a lot, and I haven’t lost a single kilo.