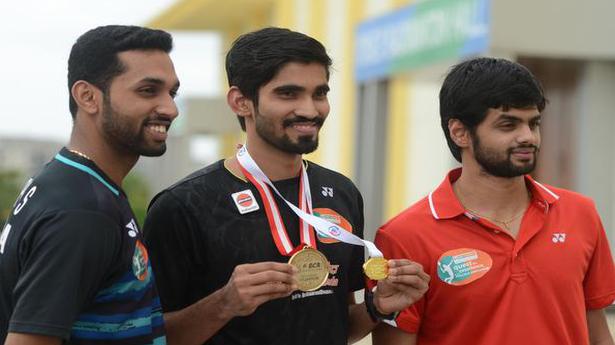 In an encouraging year for Indian men’s singles shuttlers, three musketeers — K. Srikanth, H.S. Prannoy and B. Sai Praneeth — stood out because of their consistent showing in elite events.

Sai Praneeth claimed the Singapore Superseries title to be the fourth Indian to win such an event. He also won a Grand Prix and came second in another.

Srikanth is the World No. 3 at present, while Prannoy occupies the 10th slot, and Sai Praneeth the 16th.

“Probably the hard work of the last four-five years came out this year… We used to have a couple of light sessions here and there, but in the last eight months we were pushing to the full in every session because we understand that not just one but six-seven are playing well,” says Prannnoy.

“Srikanth’s performance also gave huge confidence to the rest… Superseries is like Grand Slam in tennis, where Federer and Nadal play a final. But people don’t understand that in badminton, you are like a Federer or a Nadal.

“Earlier, we used to think playing the Superseries quarterfinals is the biggest thing. Now, when Srikanth has raised the bar, winning is the only option.”

Srikanth adds, “Suddenly we have started believing that we can be on par with top-level athletes. That belief and the training are helping. It is not an overnight process.”

Sai Praneeth thinks the increased fitness level has helped too. “Our training plan has changed. Mulyo Handoyo, the coach from Indonesia, changed the programme after which we saw a lot of difference.”

Prannoy says more men’s shuttlers are capable of doing well. “Ranking-wise me, Srikanth and Sai are close. Then Sameer Verma (30th), Ajay Jayaram (38th) and Sourabh Verma (49th) are in the top 50s of the world… A lot of youngsters are also coming up.”

Prannoy throws light on their rivalry. “We are all good friends outside, it is just that everyone wants to win and achieve things.”

According to Prannoy, maintaining a few secrets about one’s own game is essential within a closely-knit group. “What I don’t play in practice matches can be executed in tournaments. Those are secrets, should not be revealed,” Prannoy says with a smile.