Thought to be last survivor of Dundalk's 'Blitz' firefighters 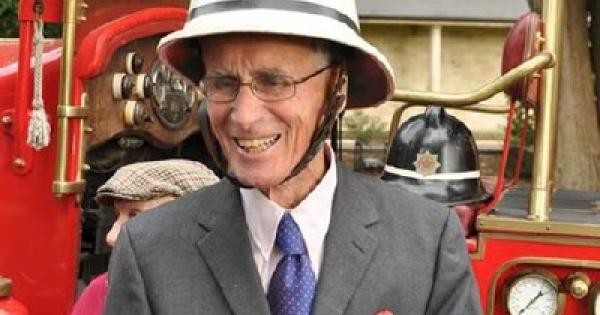 John Gray senior who died suddenly at the age of 95 at his residence at Avenue Road on September 26 is thought to be the last surviving volunteer fire fighter who travelled to the beleaguered Belfast during the bombing blitz in World War 2.

John then aged 19 was the youngest of the volunteers who at great peril made two separate missions during the most ferocious and lethal bombing raid outside of London during the German air attacks on Britain. There were over 1,000 civilian fatalities in the 1941 offensive on the city.

The bravery of the fire fighters from the Republic, which included regular firemen from Dunlaoghaire, Dublin, Drogheda and Dundalk Fire brigades as well as auxiliaries from work places was only formally recognised five years ago in 2011.

It was also something that the selfless and humble men like John never spoke about. One of the reasons perhaps was the horrors they encountered. One such sight that John saw was a woman and her two young children huddled together with no apparent injuries but nonetheless dead.

It was only in the last number of years his family learned of his involvement with the 70th anniversary of the mercy mission when the four Fire Brigades that went to Belfast’s aid were invited to a special event organised by Northern Ireland ex Fire-fighters Mid Ulster Association . John was a VIP guest who travelled along with the Dundalk Fire Service. He was honoured and made a presentation of a glass commemorative plaque.

Reluctantly he also agreed to take part in a documentary by Gerry Kelly on the blitz but typically he downplayed what he had done. His words to the effect were “that’s what you did. You helped people.”

He worked in Hallidays shoe factory and his boss Arthur Halliday banged on his door and called “come on we are going to Belfast,” he recalled.

The factory crew under the direction of Halliday and company accountant and general manager Dan Devenney—- who started up a family stationary business still operating in Crowe Street, travelled in two taxis behind a portable water pump towed by a council lorry and the town’s Merrryweather fire engine to the ravaged city.

The factory was one of a number including PJ Carrolls that had its own standby emergency fire service and was in training over the war period with Dundalk one of the towns regarded as most at risk of falling foul of Hitler’s raiding bombers.

As a neutral country Ireland couldn’t be seen to provide help, but Taoiseach Eamon De Valera asked for volunteers from the fire service to go to Belfast’s aid. John was one of a party of 20 from Dundalk to respond, and because of the country’s neutrality could not stay overnight and had to make trips down and back the two days they assisted.

John was born in Barrack Street and grew up in Saint Alphonsus Villas. There was a history of heroism in his family. His great grandfather Captain John Gray was drowned off the South Wales coast in 1897.

He was the second eldest of the family of James and Margaret (nee Corry), with brother Paddy now the only survivor. John was predeceased by sisters, Margaret, Teresa (Tessie) and Annie, along with brothers, Jemmy and Christy.

He went to school in the Christian Brothers and went to work at the age of 14 in Hallidays, where he was employed for 48 years. Afterwards he was a lollipop man for 25 years who assisted school pupils across the road close to his home at Seafield Lawns.

He continued to work until he was 86 and led a very active and healthy life, only once being in hospital. He was very independent until failing eyesight and other ailments caused him to slow down very recently.

He walked and cycled everywhere, never learning to drive and was only on an aeroplane twice. As a young man he cycled the length and breadth of the country with his friend Eddie Walsh. He often took the train to Dublin and cycled around Cork and Kerry. He was still walking to Mass in the Redemptorist Church and out to the town’s cemetery at Dowdallshill and back until the last handful of years

He gave a lot of his time to voluntary organisations, being involved in the Civil Defence for years. He was a co-founder of the Muirhevnamor branch of Saint Vincent de Paul, and was involved in it for 20 odd years from the 1970s to the 1990s.

Wife, Nancy (nee Byrne) hailed from Saint Malachy’s Villas and worked in McGrath’s shoe shop which was located at the bottom end of Clanbrassil Street. When the couple married she took on the traditional role of homemaker and housewife, and the main responsibility for rearing their two sons and daughter.

They lived in Wolfe Toe Terrace and Nicholas Street before moving to the Avenue Road. They loved to dance and always talked about their times in the AOH hall in Jocelyn Street. Nancy passed away in 2010.

John eschewed modern technology, never using a phone or a Kindle reading device, although he was an avid reader, and was very interested in history and the classics. He was an ardent viewer of the game show Countdown screened on Channel Four, and loved crosswords and quizzes. For a brief time he was also interested in amateur radio.

The Readings were given by daughter, Olivia and his grandson’s wife Michelle Griffin, while the Prayers of the Faithful were led by grandson, Nicky and Eithne Lambe.

The Offertory gifts were presented by niece, Jacqueline and granddaughter, Paula Gray. Symbols of his life were also taken to the altar and included the glass plaque the deceased was presented with on the 70th anniversary of Belfast blitz.

On his final journey the cortege passed the town’s Fire Station where brigade members in uniform paid a final tribute to John, forming a Guard of Honour, and the Merryweather that drove to Belfast during the blitz was parked outside.