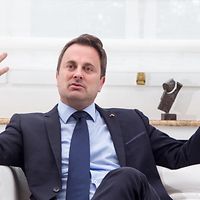 Ahead of Bettel in the international list are politicians like former Austrian Chancellor Werner Faymann during his time in office (418,000 euros) and Australian Prime Minister Malcolm Turnbull (483,000 euros). Bettel is closely followed by leaders such as German Chancellor Angela Merkel (298,000 euros) and his Belgian Counterpart Charles Michel (291,000 euros).

With a yearly income of 2.14 million euros, Singapore Prime Minister Lee Hsien Loong is the indisputable number one of the list. The Chief Executive of Hong Kong comes in second at 703,000 euros per year. Outgoing US President Barack Obama received 488,000 euros for his services in the past years.

US President-elect and billionaire Donald Trump wants to renounce this compensation. In a recent television interview he said: “I think I have to by law take 1 dollar, so I’ll take 1 dollar a year”. Claiming he hadn’t really thought about the subject, Trump asked the reporter: “I don’t even know what it is. Do you know what the salary is?”

The list composed by 24/7 WallSt only contains politicians. Royal heads of states were not considered, as the information pertaining to their compensations are not always publicly accessible.

Apart from that, the list did not consider additional compensations heads of state or government might get, such as retirement pensions or residences provided to them.

Only recently it emerged that former British Prime Minister David Cameron received 120,000 pounds for a 60-minute speech during a conference organised by Blackstone Properties in New York, the biggest real estate private equity firm in the world. This sum was almost as high as the yearly income Cameron saw himself rewarded as the British head of government (140,000 pounds).