Justin Trudeau received a lot of negative publicity in the foreign media and to a lesser extent here at home after refusing to sign an agreement in principle for a new trade deal with 10 other Pacific Rim nations on Friday.

Whether he “sabotaged” the deal, as one Australian newspaper put it, or “screwed” the other leaders who waited for him on the sidelines of the APEC summit in Vietnam, the prime minister suffered a hit to his popularity on the world stage, something that really hasn’t happened since he took office two years ago.

Some observers are warning Trudeau may have made it more difficult for Canada to gain a desired foothold in two other organizations in the region: ASEAN, the 10-nation Association of Southeast Asian Nations, and the East Asia Summit, a key forum for discussing security issues in the region. He attended both this weekend as an observer. It was the first time a Canadian leader had been invited.

But whatever price he paid or will pay, Canadian officials insist the benefits far outweigh it.

They say Trudeau reinforced his message that Canada will not succumb to pressure and sign a trade deal he doesn’t believe is in the best interests of Canada.

Japan, Australia and Singapore, in particular, wanted to press ahead, even with few changes to the original Trans-Pacific Partnership that included concessions they had all made in order to get the U.S. on board before President Donald Trump withdrew from the deal. 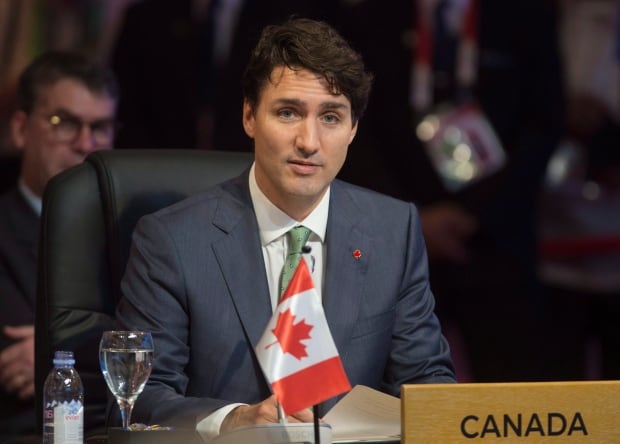 Canada’s position is that the value of increasing trade can’t take precedence over the progressive values Trudeau wants enshrined, not just by inserting clauses to protect the environment and promote labour and Indigenous rights, but in changing the name of the pact itself to the Comprehensive and Progressive Trans-Pacific Partnership.

Canada also wanted more protections for culture and to suspend intellectual property provisions that critics argued would give the U.S. too much control over patents, copyrights and new technologies. It got both.

“We were not going to make concessions just to get a deal,” one official said Tuesday as the prime minister winged his way back from Asia. “We are going to demonstrate to Canadians that this government is doing everything it can to achieve the standards we have set.”

Canadians, though, weren’t the only audience Trudeau appeared to have had in mind this weekend as he met with world leaders in Vietnam and the Philippines.

Another was the Trump Administration, which is demanding significant concessions from its North American neighbours in return for not scrapping NAFTA.

Trudeau is aware there can be no “win, win, win” in negotiations with Trump. The U.S. president’s playbook designated only one winner, and it’s him.

For Trump, fairness is measured by unequal outcomes. 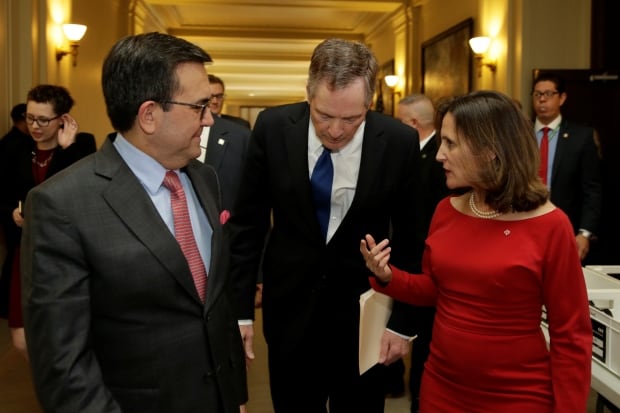 Some of the issues Canada succeeded in pushing off in the TPP will be back on the agenda when Mexico, the U.S. and Canada resume NAFTA talks later this week. Foreign Affairs Minister Chrystia Freeland, U.S. Trade Representative Robert Lighthizer, centre, and Mexican Secretary of Economy Ildefonso Guajardo Villarreal met in Washington last month. (Yuri Gripas/Reuters)

In these NAFTA negotiations, that means demanding the inclusion of the same intellectual property provisions that Canada opposes in the TPP. It means demanding Canada and Mexico agree to guarantees of, for example, specific quotas for U.S.-made parts in cars made in North America, and a dispute resolution mechanism that will mean more wins for the U.S. than the existing third-party system that has often ruled against it.

The demands are so extreme that even some American business groups have dubbed them “poison pills” Trump can use to justify scrapping NAFTA as negotiators prepare to resume talks later this week in Mexico City.

Bringing ‘progressive’ values to the table

And there was a third message, this one for the other countries Canada is looking to for future trade deals: China, India and Southeast Asian countries that don’t necessarily share the same kind of progressive ideals Trudeau is determined to promote.

“That’s very much a position of the Trudeau government,” said Jean Charest, the former Quebec premier who now works extensively on international trade issues, in an interview this weekend with CBC News.

What likely happened behind the scenes of TPP talks?6:11

“Remember, this is what they brought to the table in NAFTA, so they have to be consistent. They are bringing it to the table on TPP.”

Those are the big themes that played into Trudeau’s thinking this weekend. But practical considerations played a role, too.

Both Canada and Mexico had to be aware of the danger in signing a new Pacific Rim deal without the U.S. that runs counter to the demands being made by the Trump administration for specific U.S. content in North American automobiles.

And then there’s the demand from both the U.S. and New Zealand, for example, for changes to Canada’s supply management system in the dairy industry. It’s not clear whether the Canadian government has the kind of buy-in it wants or needs from Canadian dairy producers at this stage.

Of course, trade agreements are largely about choices and trade-offs — giving more access in one sector to secure preferential treatment in another.

With so many trade talks already underway, and more likely in the future, this give-and-take balancing act is going to get a whole lot tougher.

Gambling is 'Australia's equivalent of the NRA': Tim Costello