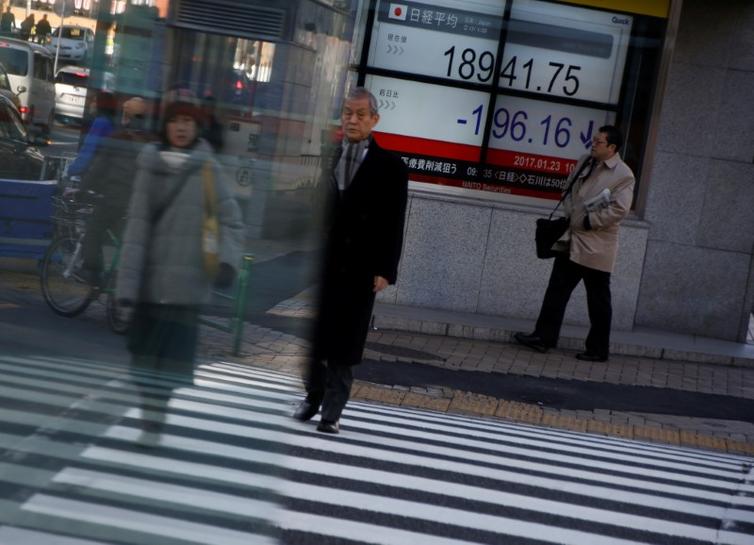 SINGAPORE The U.S. dollar and Treasury yields tumbled on Thursday on U.S. President Donald Trump’s comments favoring lower interest rates and tensions over North Korea, while Asian stocks put in a mixed performance amid a raft of regional economic data.

The dollar index, which tracks the greenback against a basket of six trade-weighted peers, fell 0.6 percent to 100.07. U.S. Treasury yields slid to 2.232 percent, just slightly above a five-month low of 2.221 hit earlier in the session.

MSCI’s broadest index of Asia-Pacific shares outside Japan was up about 0.6 percent.

Australian stocks retreated 0.75 percent on declines in the materials and energy sectors, shrinking gains for the week to 0.45 percent, despite a surge in employment in March, and an jobless rate that remained at 5.9 percent.

Most markets in the region will be closed on Friday for the Good Friday public holiday.

Escalating fears of a new weapons test by North Korea kept investors on edge, as a U.S. carrier group sails toward the area. Foreign journalists visiting the isolated state were told to prepare for a “big and important event” on Thursday.

The North Korea-related tensions have sent the cost to protect South Korean government debt against default soaring to 9 1/2-month highs.

But Korean stocks were up 0.8 percent and the Korean won tacked on 0.6 percent after the central bank kept its policy rate unchanged at 1.25 percent for a 10th straight month on Thursday as expected, and upgraded its growth outlook.

The yuan rose 0.2 percent as the dollar wilted after Trump said the greenback is getting too strong and that would eventually hurt the U.S. economy.

In an interview with The Wall Street Journal, Trump alsosaid he would like to see U.S. interest rates stay low.

The president didn’t rule out re-nominating Fed Chair Janet Yellen once her four-year term is up next year.

“Trump’s comments came at a time when some had begun to think that perhaps the president was not as supportive of a weak dollar as initially perceived,” said Shin Kadota, senior strategist at Barclays in Tokyo.

China’s trade surplus with the U.S., the size of which has also been a point of contention for Trump, widened in March from February, customs data showed on Thursday.

The data came amid a warming of relations between China and U.S., with Trump backing away from labeling China a currency manipulator in an interview with the Wall Street Journal.

“The change in policy should certainly ease concerns over the protectionist stance of the Trump administration that should benefit emerging markets in general,” James Woods, global investment analyst at Rivkin in Sydney, wrote in a note.

“However it also continues to raise doubts about the administration’s ability to deliver on campaign promises, which include the all-important pledge for tax reform.”

The dollar pared earlier losses to rise slightly to 109.07 yen, after touching a five-month low earlier in the session. It is down 1.8 percent so far this week.

Global benchmark Brent was slightly lower at $55.84, failing to make up any of Wednesday’s 0.7 percent loss.

Gold pared earlier gains but hovered near a five-month high hit earlier in the session. The precious metal was down about 0.1 percent at $1,283.71 an ounce.