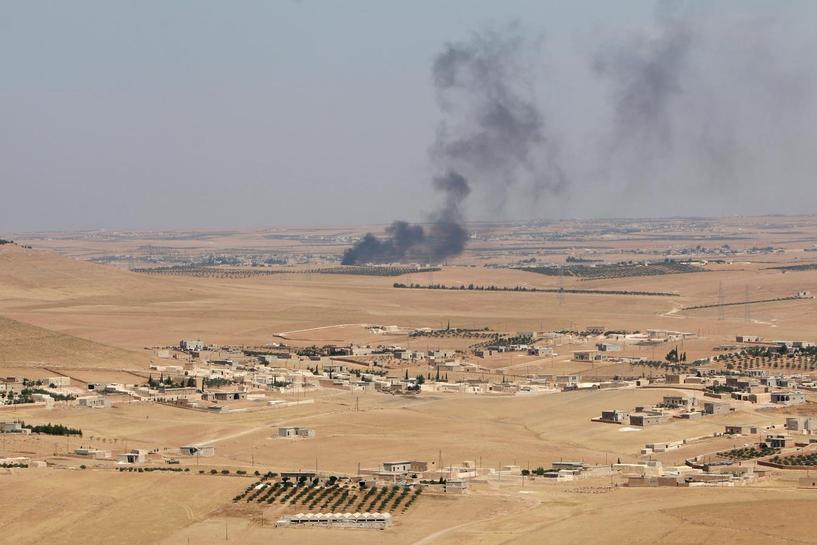 NEAR THE EUPHRATES RIVER, northern Syria U.S.-backed Syrian fighters in a major new offensive against Islamic State vowed on Thursday to cut off the last remaining access route to the outside world for the self-proclaimed caliphate, and won vital, if tacit, backing from Turkey.

The assault around the Syrian city of Manbij, backed by U.S.-led coalition air strikes and a contingent of American special forces, aims to cut off Islamic State’s last 80 km stretch of the Syrian-Turkish frontier by seizing territory in northern Syria west of the Euphrates River.

If successful, that would achieve a long-standing aim of Washington and amount to one of the biggest strategic defeats inflicted on Islamic State since it proclaimed its rule over all Muslims from territory in Iraq and Syria two years ago.

“We confirm that this campaign will continue until the liberation of the last inch of the land of Manbij and its rural areas,” said a statement read out on the banks of the Euphrates by Adnan Abu Amjad, a commander of a group called the Manbij Military Council, allied to the U.S.-backed Syria Democratic Forces.

“Oh brave people of Manbij, our forces are coming to liberate you from the shackles of the Daesh terrorist torturers,” said the statement, using an acronym for Islamic State also known as ISIS or ISIL.

Washington has been leading an international campaign of air strikes against Islamic State for two years in both Syria and Iraq. It has long been in search of reliable allies on the ground in Syria, where it also opposes the government of President Bashar al-Assad in a multi-sided civil war that has ground on for five years.

The SDF, set up last year, includes a powerful Syrian Kurdish militia and what Washington says are growing numbers of Arab forces that have been persuaded to join it. It has swept into villages west of the Euphrates since launching its offensive on Tuesday.

That advance comes as Iraqi army forces have separately begun an assault on the Iraqi city of Falluja, 750 km down the Euphrates at the opposite end of Islamic State’s sprawling caliphate.

The Iraqi troops held their positions without advancing for a third straight day on Thursday, after pouring into the besieged city’s southern outskirts on Monday. A Reuters reporting team in Saqlawiya, a village near Falluja, saw Iraqi Shi’ite militia fighters in control of a complex of well-fortified trenches and tunnels captured from Islamic State.

In other separate campaigns, Iraqi Kurds have also been advancing in villages near the northern Iraqi city of Mosul, and Russian-backed forces of the Syrian government have fought Islamic State in other parts of Syria. The fighting amounts to some of the biggest pushes against the militants by their disparate enemies across a variety of fronts.

Washington hopes the assault near Manbij will be a turning point in the two-year conflict by choking off Islamic State’s last major link to the outside world. The militants have used the frontier for years to receive supplies and manpower, and more recently to send back fighters for attacks in Europe.

“We know that there is external plotting from Manbij city… against the homelands of Europe, Turkey, all good friends and allies of ours, and the United States as well,” U.S. Defense Secretary Ash Carter said.

Of the SDF fighters, he said: “This is a capable force. They are doing all the things we can always do with able and motivated local forces to fight ISIL.”

Washington’s ultimate goals are to drive Islamic State from its main bases: Raqqa in eastern Syria and Mosul in northern Iraq, to bring about the collapse of its control.

Kurdish fighters allied to Washington have already captured much of northeast Syria near the Turkish border, but their advance west of the Euphrates to close off the frontier once and for all was limited by strong opposition from U.S. ally Turkey, which considers the Kurdish YPG its enemies.

However, Turkey’s President Tayyip Erdogan signaled his apparent tacit support for the latest advance on Thursday, saying he had been informed that most of the fighters involved would be Arabs rather than Kurds.

Turkish military sources said Turkey had shelled Islamic State positions across the border at Azaz, west of where the advance was taking place, killing five militants. Medical charity Medicins sans Frontieres says 100,000 people are trapped near Azaz and in peril as the battle lines draw near.

A Kurdish source, speaking on condition of anonymity to Reuters in Beirut, predicted the Syrian militias would reach Islamic State-held Manbij within days, after advancing to within 10 km (6 miles) of the town.

It was too early to say how the battle for Manbij would go, the source said, but added that IS defenses on the west bank of the Euphrates River had collapsed at the start of the campaign.

However, Naser Haj Mansour, an adviser to the SDF general command, told Reuters Islamic State was still putting up a fight: “In general, the progress is at a good pace and performance, keeping in mind that Daesh still has the capability to fight.”

In Iraq, Prime Minister Haider al-Abadi announced the assault on Falluja 11 days ago, veering from the strategy sought by Washington which wants its Iraqi allies to concentrate on Islamic State’s de facto Iraqi capital Mosul.

Falluja, where U.S. forces fought the biggest battles of their 2003-2011 occupation of Iraq, has long been a bastion for Sunni Muslim insurgents and was the first Iraqi city where Islamic State raised its flag in 2014 before storming through the north and west of the country.

It is just an hour’s drive from Baghdad, and seizing it would give the government control of the main population centers of the fertile Euphrates valley west of the capital for the first time in more than two years. But the mission in potentially hostile Sunni territory is also fraught with risk.

Abadi repeated calls on Thursday for Iraq’s fractious politicians to unite behind the army in its advance on Falluja. On Wednesday he announced a pause in the advance to reduce the threat to civilians still trapped in the city.

Although most of Falluja’s population has fled, the United Nations has expressed deep concern over the fate of tens of thousands of civilians still there, including hundreds of families held by Islamic State fighters as human shields in the city center.

U.N. refugee agency UNHCR said 4,380 people had fled Falluja so far during the offensive and it was searching for places for them in camps. It estimates 10,000 families could be displaced during the assault.

Abadi, a member of Iraq’s Shi’ite majority, is trying to hold together a coalition government in the midst of popular protests against an entrenched political class. An operation in Falluja that harms Sunni Muslim civilians could further alienate Sunnis, but he has decided he must act there to protect Baghdad from suicide bombers who have escalated attacks in the capital.

Previous Sonam Kapoor on bhel puri, bajra roti and why she is considering going vegan: The FOODie Interview
Next Airbus could be squeezing in more seats on to its A380 jets