U.S. carrier to arrive in Sea of Japan ‘within days,’ Pence says 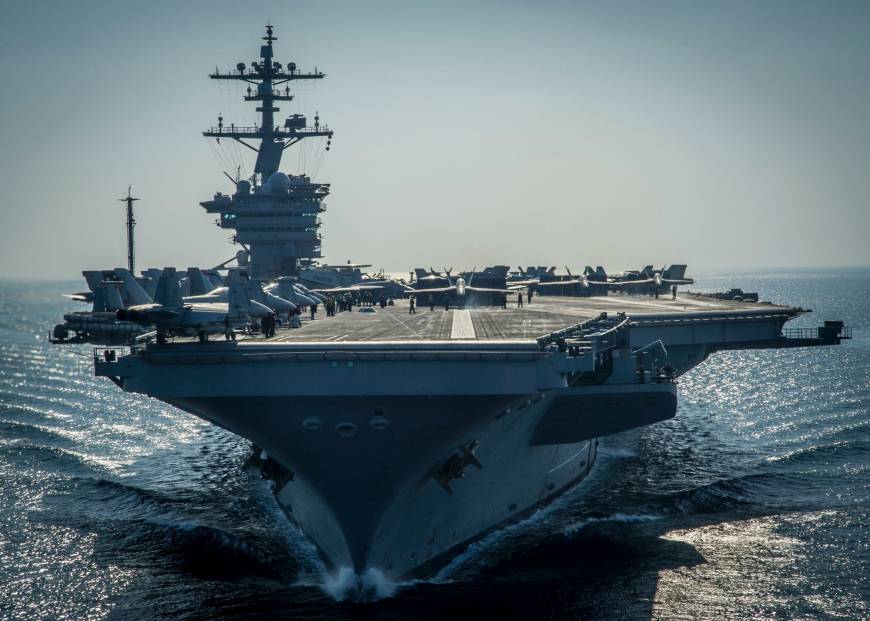 The USS Carl Vinson aircraft carrier strike group is expected to arrive in the Sea of Japan “within a matter of days,” U.S. Vice President Mike Pence said Saturday amid tensions with North Korea.

“Our expectation is that they will be in the Sea of Japan, in position, in a matter of days, before the end of this month,” Pence said during a joint news conference in Sydney with Australian Prime Minister Malcolm Turnbull.

Days earlier, there had been widespread confusion over the whereabouts of the Vinson-led strike group. It had initially been scheduled to visit Australia for port calls, but was rerouted on April 9, reportedly toward waters off the Korean Peninsula in a signal to the nuclear-armed North designed to deter it from further atomic and missile tests.

U.S. President Donald Trump boasted of the strike group in an interview earlier this month with the Fox Business Network, where he described it as “an armada.”

“We are sending an armada. Very powerful,” he said. “We have submarines. Very powerful. Far more powerful than the aircraft carrier. That I can tell you.”

The voyage from Singapore to the Sea of Japan was speculated as taking more than a week.

But photos posted to the U.S. Navy’s website on April 15 showed the carrier transiting the Sunda Strait, the passage between the Indonesian islands of Sumatra and Java — some 5,600 km from South Korea.

The White House has denied that it offered misleading information on the whereabouts of the Vinson.

Pence told the news conference, which was livestreamed online, that the decision to dispatch the Vinson to the waters off the Korean Peninsula “was set into motion some time ago.”

On Friday, the U.S. Navy revealed the approximate location of the Vinson in a statement announcing that a pilot of a fighter jet operating from the carrier was forced to eject in the Celebes Sea, south of the Philippines.

The pilot, who ejected from the F/A-18E fighter jet on final approach to the carrier, was recovered by a helicopter, according to the statement. He was not injured.

North Korea will mark the founding of its military on April 25, less than two weeks after staging a massive military parade in Pyongyang to celebrate the 105th anniversary of founder Kim Il Sung’s birth. The North has historically marked important anniversaries with provocative events such as missile launches or nuclear tests.

At Saturday’s news conference, Pence took a firm line with Pyongyang, saying it must not underestimate U.S. resolve in the region.

“One thing that nations, most especially the regime in North Korea, should make no mistake about is that the United States has the resources, the personnel, and the presence in this region of the world to see to our interests and to see to the security of those interests and our allies,” he said.

Media reports have said the The Maritime Self-Defense Force may also link up with the strike group for joint drills as it passes through waters close to Japanese territory.

Two Maritime Self-Defense Force destroyers have left Sasebo naval base and are likely to take part in a drill with the Vinson, the reports said, citing Defense Ministry sources.

The date and location for the exercise have not been set yet, but the destroyers are likely to join the strike group at some point.

Both Trump and Prime Minister Shinzo Abe have taken a tough stance against the North’s weapons tests amid growing speculation that Pyongyang will conduct an intercontinental ballistic missile test soon — possibly this month — after leader Kim Jong Un used a New Year’s Day address to claim that the North was in the final stages of developing such a weapon.

Earlier this week, the North tested an apparent medium-range missile that blew up almost immediately.

That launch was the latest in a spate of tests this year, including the near-simultaneous firing of four ballistic missiles into the Sea of Japan last month — a move the North said was a rehearsal for attacking U.S. bases in Japan. Those missiles, three of which fell into Japan’s exclusive economic zone, flew about 1,000 km. Abe characterized that test as “a new level of threat.”

Missile experts said the hypothetical target of that drill appeared to be U.S. Marine Corps Air Station Iwakuni in Yamaguchi Prefecture. Observers said the undisguised threat to U.S. bases in Japan was rare, even for Pyongyang, which routinely serves up colorful invectives.

Previous US naval armada to be in Sea of Japan in days: Mike Pence
Next Rs-18 lakh study tour: Councillors have nothing to offer Chandigarh