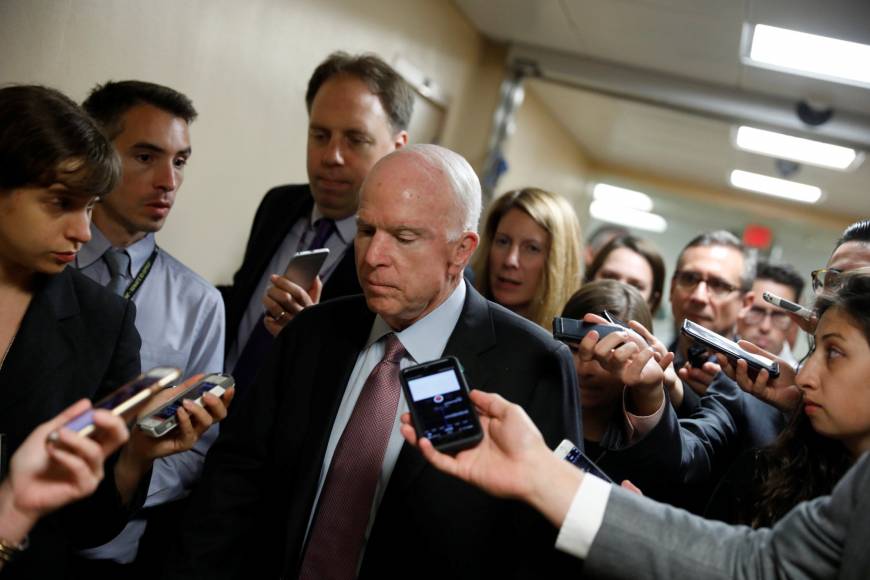 The navy’s top officer said he can’t yet draw a direct link between those problems and the crashes, and instead said commanders are ultimately responsible for ensuring their forces are combat-ready and operating safely and effectively.

“I am accountable for the safe and effective operations of our navy, and we will fix this. I own this problem,” Adm. John Richardson, chief of naval operations, told the Senate Armed Services Committee as distraught family members looked on. “I’m confident that our navy will identify the root causes and correct them, and that it will be better in the end.”

“It is simply unacceptable for U.S. Navy ships to run aground or collide with other ships — and to have four such incidents in the span of seven months is truly alarming,” said McCain. Speaking directly to Richardson, he said that some fixes could be done now, without long studies or review.

Sailors “should not be working 100 hours a week,” said McCain, who at the start of the hearing introduced all the family members in the audience and asked them to stand. “That’s common sense that doesn’t require a study.” He told Richardson to make immediate changes to reduce the strain.

The USS John S. McCain and an oil tanker collided near Singapore last month, leaving 10 U.S. sailors dead and five injured. And seven sailors died in June when the USS Fitzgerald and a containership collided off the Izu Peninsula, south of Tokyo. The USS John S. McCain is named after the committee chairman’s father and grandfather, but the Arizona Republican senator also served in the navy.

“Your presence here today reminds us of our sacred obligation to look after the young people who volunteer to serve in the military, said McCain, who — along with the navy leaders — met and offered condolences to a number of the family members.

During the hearing, McCain also noted that, with three of the ships involved in the collisions now out of service for months, “there are serious questions about our maritime readiness to fight in response to North Korean, Chinese and Russian aggression.”

Members of the Senate Armed Services committee were quick to pin some responsibility for the accidents on Congress, which has relied on stopgap spending measures for the past eight years, forcing the services to shift money from accounts for modernization and training in order to fund current missions.

They said they believe that reductions in training time have contributed to the accidents.

Navy Secretary Richard Spencer noted that over time Congress has added training and other requirements to the force, likening it to piling more and more rocks into a rucksack.

“No one is taking a rock out, and the rucksack is getting pretty damn heavy,” he said.

John Pendleton, an expert on defense readiness issues with the Government Accountability Office, said that ships based in Japan have failed to keep up with required warfare certifications and that reductions in ship crew sizes has led to longer working hours, including the 100-hour weeks. He was skeptical the navy will be able to make needed gains in readiness until aggressive deployment schedules and other demands on the force are decreased.

The high tempo in ship operations in the Pacific has forced navy crews to squeeze in training where possible, and led to some sailors working 100-hour weeks, leaving them little time to rest, officials said.

Richardson told the panel that the navy has taken a series of steps to review safety standards, ship certifications and readiness of the force. The increased scrutiny includes ensuring that sailors are well qualified to stand watch and that commanders address “fatigue concerns” and make sure their forces get enough sleep.

Already the navy has fired six senior officers, including the commander of the Japan-based 7th Fleet, citing a loss of confidence in their ability to command.