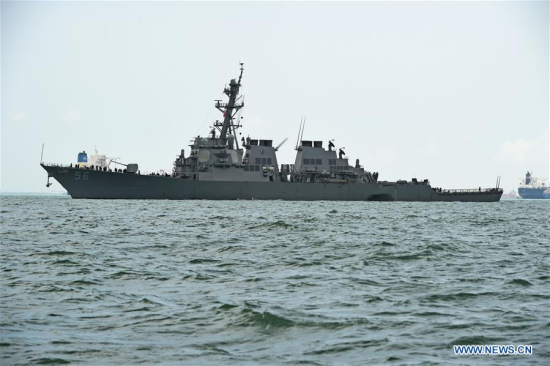 The U.S. 7th Fleet confirmed on Thursday evening that the remains found in the USS John S. McCain guided-missile destroyer that collided with a merchant vessel on Monday is one of the 10 missing sailors, according to its website.

The victim was identified as Electronics Technician 3rd Class Kenneth Aaron Smith, 22, who is from New Jersey.

Meanwhile, the Fleet said after more than 80 hours of multinational search efforts, the U.S. Navy suspended ocean search and rescue efforts for the other nine missing sailors in an approximately 5,438-square km area east of the Straits of Malacca and Singapore.

U.S. Navy and Marine Corps divers will continue search and recovery efforts inside flooded compartments in the ship for the missing sailors, the Fleet said.

Meanwhile, the Maritime and Port Authority of Singapore (MPA) announced on Thursday evening that Singapore decided to suspend the multi-agency search and rescue operation for the missing sailors, and will continue to support the U.S. Navy in their search within the warship.

According to MPA, the Singapore-coordinated search and rescue efforts with the United States, Indonesia, Malaysia and Australia covered 5,524 square km and involved more than 300 personnel from various Singapore agencies over the past four days.

The destroyer collided with an oil tanker Alnic MC in waters off the eastern side of Singapore on Monday morning.