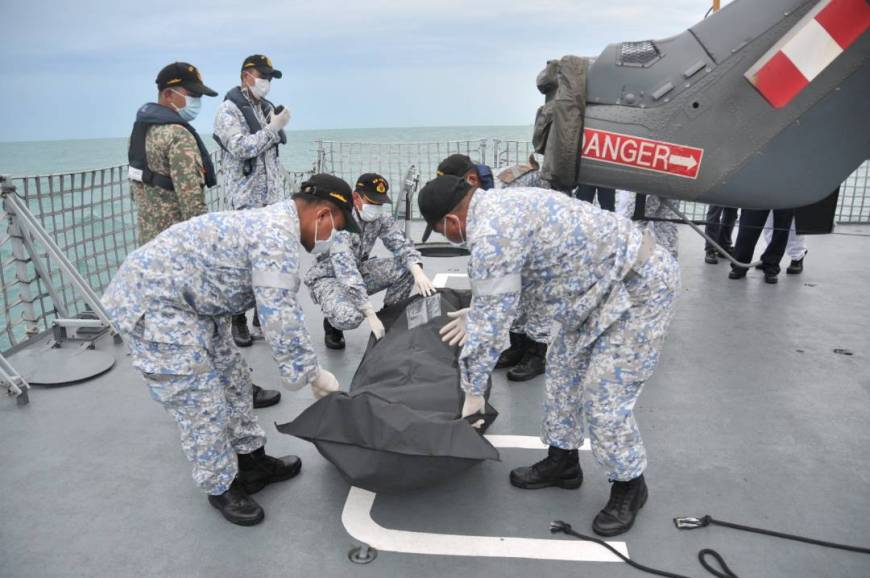 The U.S. Navy plans to relieve the commander of the Yokosuka, Kanagawa Prefecture-based 7th Fleet after two fatal collisions between destroyers and civilian vessels in Asian waters in less than three months, The Wall Street Journal reported Wednesday.

Vice Adm. Joseph Aucoin, the three-star commander of the fleet, will be relieved of command Wednesday in connection with the two collisions and two other incidents involving the fleet’s vessels, the newspaper said, citing two U.S. officials familiar with the matter.

Contacted by The Japan Times, a navy spokesman declined comment on the report but noted that U.S. Pacific Fleet Commander Adm. Scott Swift was traveling to Japan on Wednesday to meet with 7th Fleet leadership.

The USS John S. McCain, an Aegis-equipped destroyer and the Alnic MC tanker collided early Monday as the destroyer approached Singapore for a routine port call. The collision ripped a gaping hole near the warship’s waterline, flooding compartments that included a crew sleeping area, leaving 10 sailors missing and five others injured.

Swift told a news conference Tuesday some remains of navy sailors were found in a compartment of the McCain.

He also said at the news conference in Singapore, where the ship limped to after the crash, that Malaysian officials had found one body, which they were in the process of identifying, but it had yet to be identified. It was not known if the body was of a crew member.

Swift said navy divers were able to locate some remains in the sealed compartments during a search Tuesday, adding that it was “premature to say how many and what the status of recovery of those bodies is.”

“We will continue the search and rescue operations until the probability of discovering sailors is exhausted,” Swift said.

Swift would not say the location in the destroyer the bodies were found.

Earlier Tuesday, the navy announced a fleetwide probe and temporary halt to operations.

U.S. Chief of Naval Operations Adm. John Richardson said that he was asking his fleet commanders worldwide for a one- to two-day staggered “operational pause” to discuss actions to ensure safe and effective operations, adding that this could begin within a week.

Monday’s collision was the Pacific Fleet’s fourth major accident this year. Several other incidents have also prompted questions about U.S. military readiness and the training of its forces in the Asia-Pacific region.

“While each of these four incidents is unique, they cannot be viewed in isolation,” Swift said.

He said the Navy would carry out a probe “to find out if there is a common cause … and if so, how do we solve that.”

Vice Adm. Aucoin had been expected to retire in the coming weeks and his expected removal does not represent a specific finding of fault against him, the Wall Street Journal report said.

This latest crash followed the Aegis destroyer USS Fitzgerald’s June 17 collision with a Philippine-flagged freighter in the middle of the night off the Izu Peninsula south of Tokyo.

Seven U.S. sailors were killed in that accident. Just last week the navy relieved the Fitzgerald’s commanding officer, executive officer and senior enlisted sailor for mistakes that led to the deadly crash.

Richardson suggested the spate of incidents involving the Pacific Fleet — including the Fitzgerald collision, which he called “very similar” to the McCain accident — had prompted him to also announce a more comprehensive review that would examine the training of U.S. forces deployed to Japan.

“What is the situation out in Japan with our forward-deployed … naval forces out there?” Richardson said, according to a transcript of a news briefing Monday. “How are they executing their business? I just want to understand that more deeply in terms of training, generating that readiness that we ask them to achieve, and then … certifying that readiness, making sure that it meets standards.”This review would also include looking at “operational tempo, trends in personnel, materiel, maintenance and equipment,” Richardson said in a separate video posted on Facebook.

There was no immediate explanation for the cause of the collision that involved the approximately 8,900-ton McCain and the Alnic, a 30,000-ton Liberian-flagged tanker used for transporting oil and chemicals.

But CNN, citing unidentified U.S. Navy officials, reported that early indications suggested the collision had been caused by a steering malfunction as the warship approached the Strait of Malacca.

A navy spokesman declined comment, saying that “the investigation will very thoroughly determine what happened.”

Singapore, a U.S. ally located at the southern tip of the Malay Peninsula, is one of the busiest ports, and its naval base regularly receives American warships.

Richardson said that there were no indications thus far the collision was intentional or the result of cybersabotage, but added on Twitter later that the review “will consider all possibilities.”

The McCain accident comes at a time of heightened tensions in the Asia-Pacific region, including on the Korean Peninsula and in the contested South China Sea, where China has built up a number of militarized outposts. The McCain itself had on Aug. 10 carried out a so-called freedom of navigation operation near one of the Chinese-held artificial islands in the strategic waterway.

But perhaps most importantly in the near-term, the damage to the McCain means the Pacific Fleet will be without two of its Aegis ballistic missile defense-equipped destroyers amid a showdown with nuclear-armed North Korea. Those systems have been touted as a possible counter to the North’s missiles.

The North has threatened U.S. allies with its ever-expanding missile arsenal and recently conducted two successful tests of a long-range missile that experts say is capable of striking a large chunk of the United States.

In one of the isolated nation’s most provocative announcements, the North earlier this month threatened to fire ballistic missiles over Japan and toward the U.S. Pacific territory of Guam after U.S. President Donald Trump vowed to unleash “fire and fury” if Pyongyang threatened the United States.

U.S. Pacific Command chief Adm. Harry Harris, who was visiting South Korea on Tuesday, said that the McCain’s absence and the operational pause triggered by the collision would not have an adverse effect on the American military’s ability to defend the U.S. and its allies, including Japan and South Korea.

“The U.S. Navy is large. We have a lot of capacity and we will bring that capacity forward” if needed, Harris said, stressing that the U.S. Aegis warships are “only a part” of the military’s layered ballistic missile defenses.