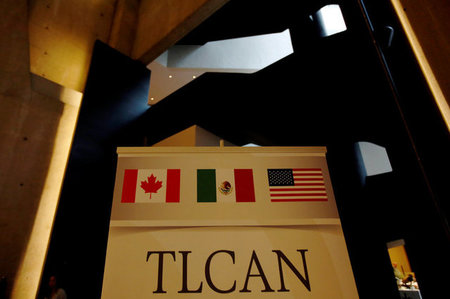 The United States will present new text proposals and begin to weigh into thornier issues of the North American Free Trade Agreement in the third round of negotiations starting in Ottawa on Saturday, U.S. chief negotiator John Melle said on Thursday.

The stepped-up negotiations come with four more rounds of talks left after Ottawa and a self-imposed year-end deadline to finish the talks before Mexico launches campaigning for its July presidential election.

“With progress made in several issue areas in the first two NAFTA negotiation rounds, USTR (United States Trade Representative) looks to move forward with additional new text proposals in round three of the negotiations,” Melle said in comments emailed to Reuters.

“At this point in the negotiations, more challenging issues will start taking center stage,” he added, without elaborating.

The first two rounds of talks between the United States, Canada and Mexico focused on consolidating language on chapters covering small and medium-sized enterprises, competitiveness, digital trade, services and the environment.

Now, negotiators will begin to weigh into more contentious issues such as rules of origin – how much of a product’s components must originate from within North America – labor standards aimed at increasing Mexican wages and mechanisms for resolving trade and investment disputes.

In its negotiating strategy for revising NAFTA ahead of the start of the talks in July, the United States said it would emphasize reducing the U.S. trade deficit as a priority.

It also said it wanted to eliminate an arbitration system for resolving trade disputes, known as Chapter 19, that has largely prohibited the United States from pursuing anti-dumping and anti-subsidy cases against Canadian and Mexican firms. Canada has suggested it will walk away from the talks if Chapter 19 is tossed aside.

Politico reported on Thursday that the United States was considering dropping a binding mechanism in NAFTA for resolving government-to-government disputes in favor of an advisory system.

The proposal would be a major shift away from a decades-old push by the United States to build an international system of enforceable trade rules, Politico reported.

Canada and Mexico have already dismissed a proposal by the Trump administration to add a five-year sunset provision to NAFTA.

U.S. Commerce Secretary Wilbur Ross said last week such a provision was needed because forecasts for U.S. export and job growth when NAFTA took effect in 1994 were “wildly optimistic” and failed to live up to expectations.

Mexico’s Foreign Minister Luis Videgaray told Reuters in an interview on Sept. 15 that the sunset clause was unnecessary since the pact’s members can already trigger a renegotiation or leave it at any time.

Since U.S. President Donald Trump has repeatedly attacked NAFTA and threatened to tear up the agreement, Mexico has pushed to secure more access to the European Union, Brazil, Israel, Singapore, Australia and New Zealand.

A Reuters poll of economists on Thursday found that Mexico and Canada will survive current talks with the United States on trade relatively unscathed. [L4N1M04FV]

Meanwhile, a separate poll by IPSOS published on Thursday showed broad-based support among Americans, Canadians and Mexicans for NAFTA.