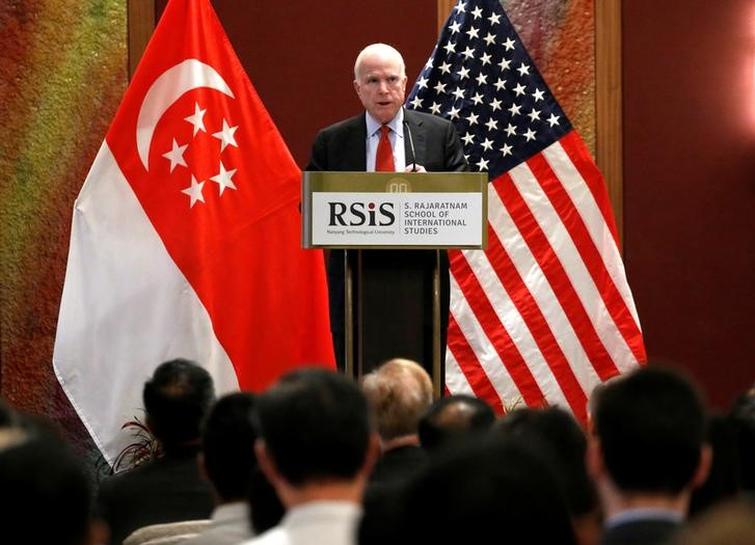 U.S. Senator John McCain gives a public lecture on the sidelines of the IISS Shangri-La Dialogue in Singapore June 3, 2016.

SINGAPORE Thailand’s prime minister and India’s defence minister called on Friday for upholding international law as they spoke at an Asian security summit that is being held ahead of a key U.N. court ruling on the South China Sea dispute.

But both stopped short of saying that the decision by the the Permanent Court of Arbitration at The Hague, likely within weeks, should be binding. The Philippines has gone to court to contest China’s claims to an area of the sea stretching deep into the maritime heart of Southeast Asia.

“We support peaceful resolution of the disputes in line with international law, including UNCLOS,” Thai Prime Minister Prayuth Chan-ocha said in his keynote address at the Shangri-La Dialogue, referring to the U.N. Convention on the Law of the Sea.

Earlier, influential U.S. Senator John McCain said he feared for the consequences if China rejected the U.N. court’s ruling and called on Asian nations to back U.S. statements that the outcome should be binding.

China does not recognise the court’s jurisdiction in the dispute and has said it will not be bound by its ruling.

“China can choose to disrupt the rules-based order. Or it can choose to become a vital partner in maintaining it,” McCain said on the sidelines of the annual Shangri-la Dialogue in Singapore.

“I fear the consequences if China chooses the path of disruption,” McCain added, later saying it could force the wider region to cooperate more closely militarily and economically.

Besides China and the Philippines, parts of the South China Sea are claimed by Vietnam, Malaysia, Taiwan and Brunei.

Worsening tensions over the South China Sea have intensified the rivalry between a rising China and the United States, which has long been dominant in the region.

“America and the world are counting on the nations of Southeast Asia to recommit their power and resolve to upholding this system on which our shared security and prosperity depend,” McCain said.

Indian Defence Minister Manohar Parrikar, also speaking on the sidelines of the meeting, said New Delhi supported the role of international law in the dispute.

“We are very clear about our policy in the South China Sea,” he said. “As (far as) India is concerned, we have always been insisting that all parties should resolve this peacefully based on the international laws and various other international norms.”

U.S. Defense Secretary Ash Carter, who is leading the U.S. delegation at the Shangri-La Dialogue, will seek broader support for the arbitration judges’ statements that the ruling must be binding.

In a speech at the U.S. Naval Academy last week, Carter accused China of attempting to play by its own rules on the high seas, in the global economy and in cyberspace and warned that it could erect “a Great Wall of self-isolation” given regional concerns about its behavior.

On Friday, to emphasize U.S. concerns about maritime security in what is one of the world’s busiest waterways, Carter took a flight on a U.S. P8 surveillance aircraft along with his Singaporean counterpart.

At a joint news conference, he urged China to participate in the rules-based order that the U.S. presence in Asia had helped maintain for the past 70 years and said Beijing had to make its own choices.

“Obviously we hope it makes the choice of one that is cooperative with the system of security which has served this region for so long,” Carter said.