US Naval Armada to Be in Sea of Japan in Days 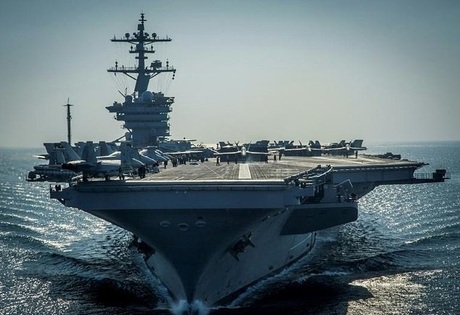 The US supercarrier Carl Vinson will arrive in the Sea of Japan in days, Vice President Mike Pence said in Australia Saturday amid high tensions with North Korea.

The Trump administration has been trying to clear the waters after sending out confusing messages concerning the whereabouts of the Vinson carrier group that supposedly was steaming toward North Korea last week.

“Our expectation is that they will be in the Sea of Japan in position in a matter of days, before the end of this month,” Pence told reporters in Sydney.

“(What) the regime in North Korea should make no mistake about, is that the United States has the resources, the personnel and the presence in this region of the world to see to our interests and to see to the security of those interests and our allies,” Pence said.

Tensions between the US and North Korea have soared in recent weeks following a drumbeat of missile tests and fears that Pyongyang may be readying a sixth nuclear test.

The US Navy on April 8 said it was directing a naval strike group headed by the USS Carl Vinson aircraft carrier to “sail north” from waters off Singapore, as a “prudent measure” to deter the regime.

“We are sending an armada. Very powerful,” said President Donald Trump as other officials made it sound like the ships were steaming toward the region.

Pentagon chief Jim Mattis said the Vinson was “on her way up”.

But the Navy admitted Tuesday the ships were in fact sent in the opposite direction — away from Singapore and toward Australia to conduct drills with the Australian navy.

Pence warned Wednesday that the United States would counter any North Korean attack with an “overwhelming and effective” response.

His comments came a senior North Korean official warned the regime had no intention of scaling down its missile programme, pledging weekly tests and threatening “all-out war” if the US took any action against it.

Previous Where is the money?
Next US naval armada to be in Sea of Japan in days: Mike Pence