US Navy returns to compasses, pencils to avoid collisions at sea 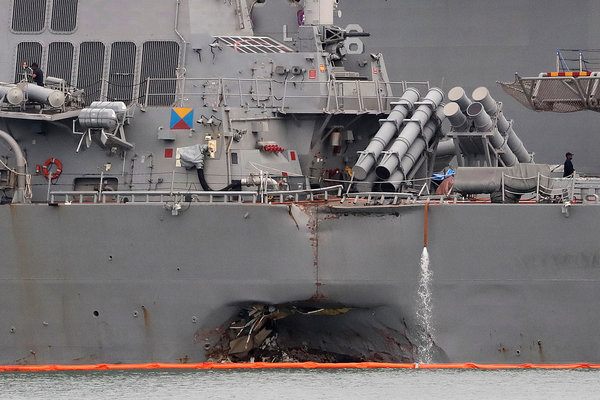 WASHINGTON — Urgent new orders went out earlier this month for United States Navy warships that have been plagued by deadly mishaps this year.

More sleep and no more 100-hour workweeks for sailors. Ships steaming in crowded waters like those near Singapore and Tokyo will now broadcast their positions as do other vessels. And ships whose crews lack basic seamanship certification will probably stay in port until the problems are fixed.

All seemingly obvious standards, military officials say, except that the Navy only now is rushing the remedies into effect after two collisions in two months left 17 sailors dead, despite repeated warnings about the looming problems from congressional watchdogs and the Navy’s own experts dating to 2010.

The podcast that makes sense of the most delirious stretch of the 2016 campaign.

“Many of the issues we’re discussing today have been known to Navy leaders for years. How do we explain that, Admiral?” Senator John McCain of Arizona, the Republican chairman of the Armed Services Committee, demanded of Adm. John Richardson, the chief of naval operations, at a hearing last week.

“Senator, there is no explanation,” Admiral Richardson said.

The orders issued recently by the Navy’s top officer for ships worldwide, Vice Adm. Thomas S. Rowden, drew on the lessons that commanders gleaned from a 24-hour fleetwide suspension of operations last month to examine basic seamanship, teamwork and other fundamental safety and operational standards.

Collectively, current and former officers said, the new rules mark several significant cultural shifts for the Navy’s tradition-bound fleets. At least for the moment, safety and maintenance are on par with operational security, and commanders are requiring sailors to use old-fashioned compasses, pencils and paper to help track potential hazards, as well as reducing a captain’s discretion to define what rules the watch team follows if the captain is not on the ship’s bridge.

“Rowden is stomping his foot and saying, ‘We’ve got to get back to basics,’” said Vice Adm. William Douglas Crowder, a retired commander of the Seventh Fleet and a former deputy chief of naval operations, who reviewed the four-page directive issued on Sept. 15, a copy of which was obtained by The New York Times. “We ought to be doing this anyhow.”

Admiral Richardson is expected to announce additional guidance to the Navy in the next several days that builds off Admiral Rowden’s directive. “We took some time to stop, take a break and review our fundamentals, to ensure that we’re operating safely and effectively and to correct any areas that required immediate attention,” Admiral Richardson told the senators last week.

The new orders come as the fallout continues from four Navy accidents in the western Pacific this year, including the two fatal crashes: the destroyer Fitzgerald colliding with a freighter near Tokyo in June, and a second destroyer, the John S. McCain, colliding with a tanker last month while approaching Singapore.

The commander of the Navy’s Pacific Fleet, Adm. Scott H. Swift, said this week that he would retire after being notified that he was no longer in the running to take charge of the Pentagon’s overall Pacific Command, which would oversee any military operations against North Korea.

Vice Adm. Joseph P. Aucoin, the former head of the Seventh Fleet, based in Japan and the Navy’s largest overseas, was removed last month in connection with the accidents. And Admiral Rowden himself has also said he will retire early.

It has been a sobering time for commanders not just in the Seventh Fleet, which has been closely scrutinized, but also the Navy’s other fleets based overseas. They are all taking a hard look at how to balance their operational requirements against eroding training and maintenance standards.

“We found some things about risk that didn’t match what we thought, and we’re making changes in things we discovered,” Vice Adm. Kevin M. Donegan, commander of the Fifth Fleet based in Bahrain, said in a telephone interview.

“When we have something like this happen, we do rigorous homework,” Admiral Donegan said. “We’re not standing fast.”

There is little argument, however, that a shrinking Navy is performing the same duties that a larger fleet did a decade ago, and that constant deployments leave little time to train and maintain ships amid their relentless duties.

Gen. Joseph F. Dunford Jr., the chairman of the Joint Chiefs of Staff, told senators during a hearing on Tuesday about his visit to the Navy destroyer Barry several months ago, and of his learning that the ship had been at sea for 70 percent of the past 12 months.

“When we go back now and we look at were they able to do all the training necessary, and what was their life like during those 12 months, 70 percent of the time underway is an unsustainable rate,” General Dunford said. “We’re going to have to make adjustments in the demand. That will incur managing operational and strategic risk, there’s no doubt.”

Many of the changes in Admiral Rowden’s order smack of simple common sense.

Hard to see and track electronically, naval vessels have long posed special perils to nighttime navigation. In addition to radar, all but the smallest commercial vessels use the so-called Automatic Identification Systems to broadcast information about their position, course and speed. Military vessels typically carry the systems but often turn them off because the captains do not want to reveal so much information. That will change under the new orders.

“Successful mission accomplishment cannot be our sole measure of effectiveness,” Admiral Rowden said in his directive. “We must take greater heed of the manning, maintenance, training and certification pillars that collectively foster success.”

Admiral Rowden also ordered standardized rules for watch teams on the bridge when the captain is not present; new reporting requirements for major equipment failures and near misses; and manually tracking vessels that come with 5,000 yards of a Navy ship to avoid collisions.

The Navy has allowed ships to rely on grueling watch schedules that leave captains and crews exhausted, even though the service ordered submarines to abandon similar schedules two years ago. A Government Accountability Office report from May said sailors were on duty up to 108 hours each week.

The new rules essentially will adopt studies by the Naval Postgraduate School to develop a shorter watch schedule to match circadian rhythms, which uses three hours of watch duty and nine hours off. Recognizing the benefits, the Navy ordered submarines to move to a similar schedule in 2015.

Senators harrumphed last week that sleep-deprived sailors presented an obvious problem begging for a solution. “If we know that somebody’s working a 100-hour workweek, I’m not sure we need a study,” Mr. McCain said acidly.