Lewis Hamilton will have it all to do to win Sunday’s Russian Grand Prix as he qualified only fourth while title rival Sebastian Vettel secured his first pole position in nearly two years.

Championship leader Vettel, who heads Hamilton by seven points in the title race, ended Mercedes’ streak of 18 consecutive poles with a brilliant final lap following a nail-biting session here at the Sochi Autodrom.

Vettel heads an all-Ferrari front row with Kimi Raikkonen second on the grid and Valtteri Bottas third. Hamilton, mysteriously off-colour for much of the weekend here, was more than half a second behind Vettel, who celebrated his pole in raucous fashion over the team radio. 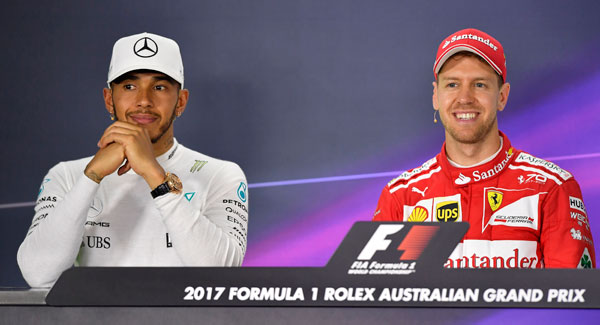 The last time Vettel started from pole was at the Singapore Grand Prix back in 2015, but his and Ferrari’s pace in Russia so far this weekend would appear to point towards a changing of the guard, with Hamilton’s Mercedes team having dominated the sport for the past three seasons.

Indeed Mercedes have a great record in these parts having won all of the three grands prix staged here while leading every lap. But they, and in particular Hamilton, have struggled for form, with Ferrari now only cementing their status as real challengers for both the drivers’ and constructors’ crown.

Hamilton was nearly six tenths of a second behind Vettel, and almost half-a-second down on Bottas. His sluggish pace was greeted by crossed arms from Toto Wolff and Niki Lauda in the Mercedes garage, with the latter puffing out his cheeks and shaking his head.

For Vettel he was jubilant to seal his 47th career pole.

“It is a very good result and I am sure everyone is happy and very proud,” he said.

“The car was phenomenal this afternoon and it was a real pleasure to take the car around on low fuel and drive it to the limit.”

British driver Jolyon Palmer is in desperate need of a strong weekend after a troubled start to the new season, but he had another day to forget here.

Palmer’s Renault mechanics worked through the night to replace his chassis after an exhaust issue was detected in practice on Friday. He then completed just four laps this morning following an engine failure, before he crashed out of qualifying to complete a torrid 24 hours.

The 26-year-old from Horsham, bidding to haul his car into Q2, ran over the kerbs on the entry to turn four before he lost control of his car and thudded the tyre barrier on the opposing side of the circuit.

Palmer walked away from the incident and is set to start 16th, but his Renault team face yet another repair job following the damage sustained to the front of his car.

And to make matters worse for Palmer his team-mate Nico Hulkenberg, new to Renault this year, qualified an impressive eighth.

Elsewhere, Daniel Ricciardo will line up in fifth for Red Bull, with Williams driver Felipe Massa sixth. Fernando Alonso, yet to make it to the end of a race this season, is only a lowly 15th, while his McLaren team-mate Stoffel Vandoorne is two spots further back on the grid.

Bernie Ecclestone, integral in bringing Formula One to Russia, was back in the paddock for the second race in succession in his so-called role as chairman emeritus. The 86-year-old, here with his wife Fabiana, watched qualifying with Russian dignitaries. Ecclestone wore a white jacket with the Russian flag on one arm and his name embroided on the other.

Russian President Vladimir Putin will be a guest of honour for tomorrow’s race.