Royal Mail was under growing pressure last night to explain why it was helping conmen flood the UK with threatening letters.

The sick letters, which tell the recipient that they are at risk of harm and need to pay a clairvoyant for protection, are being sent into the country in their millions through one of Royal Mail’s biggest and most lucrative contracts.

Some of the recent letters – which are illegal but bear Royal Mail branding on their envelopes – tell the person they are sent to that they are at risk of being killed in a terror attack. 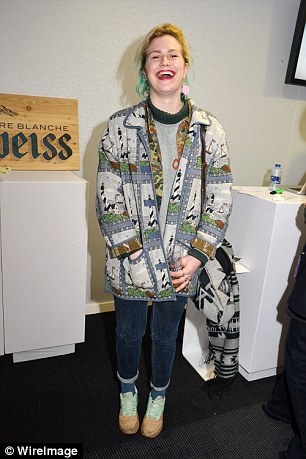 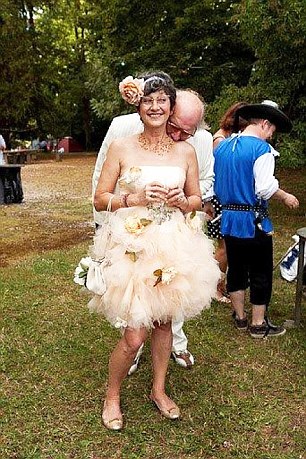 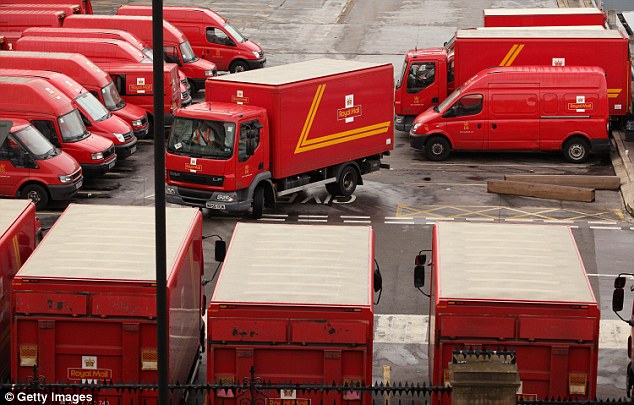 Others tell the addressee – almost always the elderly or vulnerable – that someone ‘will stab them in the back,’ or that someone close to them ‘wishes them harm’.

One victim was told if he did not pay the amount requested, he would have ten years of ‘suffering and difficulties from which no one can save’ him.

Some of the criminals behind the clairvoyant letters worked directly with Royal Mail until 2009.

And they are still able to get Royal Mail branding on their letters by sending them in bulk through Royal Mail’s contract with postal company Whistl. Last night Royal Mail was continuing to insist that it had to deliver all addressed letters.

David Cato is furious with the scam ‘clairvoyants’ who have been targeting his frail elderly father for years.

Michael Cato is in the grip of dementia and barely remembers his own family members.

But the 87-year-old has received hundreds of letters through the Royal Mail’s Whistl contract, including those from scam company BDK. 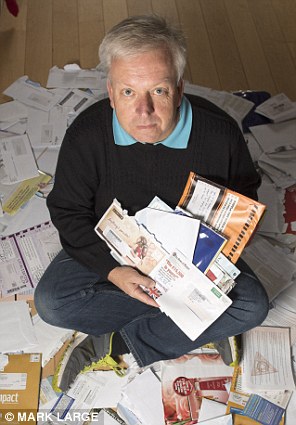 David Cato’s father Michael who has dementia lost £30,000 in the scam

One BDK letter – which claimed it was from a clairvoyant called ‘Marie de Fortune’ – stated: ‘I have a clear and precise vision. Someone will stab you in the back. Someone is speaking behind your back.’

It demanded £40 for protection from the ‘curse’ he was under – and told him: ‘Do not speak to anyone about this… keep this secret to yourself.’ Mr Cato, who was once a successful businessman, has lost about £30,000 through scams.

He also received letters from clairvoyant scammers telling him ‘lives will be sacrificed’ and he could ‘lose everything’ if he failed to send £120 for a crystal globe to protect him.

One even claimed he needed to pay for protection from terror attacks. Mr Cato’s son David, 57, from Twickenham, said: ‘Mentally my father’s just not there anymore. It’s sickening to see the way he has been preyed on. It got to the point where he wouldn’t see his grandchildren, he was doing nothing but reading and responding to these letters. We all tried to tell him it was rubbish but he wouldn’t listen. It is just awful and tragic.’

Business-owner David added: ‘In his younger years my father would never, ever have fallen for this stuff, he was such a proud and intelligent man. But now he doesn’t recognise people he has known for years.

‘When I saw how the Daily Mail had exposed some of the people behind these scams [who were] just laughing about it, I was so angry. I don’t understand how the Royal Mail can continue to deliver this stuff when they know it is illegal.’

But it was coming under growing pressure from MPs and campaigners, who said its stance amounted to ‘knowingly profiting from fraud’ and deliberately ‘turning a blind eye’ to the suffering of victims.

Royal Mail is already facing a showdown with ministers over the practices exposed by the Daily Mail – with Prime Minister Theresa May telling the company it needs to ‘urgently do more’ to stop scams coming through its network.

And last night Baroness Ros Altmann said Royal Mail’s stance was shameful – and it had a ‘duty of care’ to check what was coming through their bulk contracts.The former pensions minister and campaigner for the elderly said: ‘It is outrageous that vulnerable elderly people are being so cynically targeted through Royal Mail.

‘The Royal Mail logo is a trusted brand, built up over many years and associated with official authority. It is shameful to allow it to be used by fraudsters.’

Campaigner and broadcaster Dame Esther Rantzen called Royal Mail a ‘disgrace’, saying elderly people had been preyed on through the post for decades.

‘It is so frustrating that this is still going on,’ she told the Daily Mail. ‘It is time the Royal Mail stamped this out.’

Dame Esther said she had spoken out about postal scams on the BBC in 2006 – but that action had failed to materialise. She said Royal Mail must now be held responsible for knowingly delivering frauds – something the company denies.

Many who receive the clairvoyant letters are too terrified to tell their family and friends. This is because the phoney clairvoyants forbid victims from talking to those close to them about the letter, saying this will put them at risk.

The son of one elderly victim only found out his mother had been ‘totally brainwashed’ when he looked into the cupboards and drawers of her house after her death and found them stuffed full of threatening post.

Among the letters recently sent through the Whistl contract was one sent to an 89-year-old with dementia in Twickenham, which read: ‘Terrorist activities are intensifying [and] there is a danger menacing your future…you had better trust me.’

Royal Mail admitted last night that it had worked with one of the prolific companies behind the criminal clairvoyant scam letters – BDK Mailing – until 2009.

That company has been named in a recent US court action as being responsible for millions of ‘multiple mass mailing fraud schemes’.

The action claims the family firm is sent between £40million and £50million every year by hundreds of thousands of victims in the U.S. alone, who ‘suffer devastating financial losses from the defendants’ fraudulent schemes’. The BDK empire was the brainchild of Bernhard Elchlepp, a German bookseller who died last year, aged 63. The family firm is now run by his French wife Chantal, 58 and his step-daughter Marion, 25, a self-declared ‘hipster’ photographed at Paris society events.

Her roles include ‘planning mailings’ and ‘mailing results analysis’.

Their business – split into companies in Switzerland, France and Singapore – has turned over an estimated £200million since they started a decade ago. BDK, Chantal and Marion did not respond to requests for comment.

MPs attacked the Royal Mail for ‘knowingly profiting’ from scams.

Conservative MP Andrew Bridgen said: ‘When a vulnerable person receives post from the Royal Mail, they expect it to be bona fide and genuine. This scale of fraud is shocking – but even more shocking is the apparent indifference of the Royal Mail. They should stop knowingly profiting on the back of vulnerable people’s misery.’

Last night the Royal Mail said: ‘We take the Daily Mail’s allegations very seriously. We will work with the Government, industry partners and law enforcement agencies to tackle the issue even more vigorously.

‘Scam mail is a scourge. We are raising the issue with other posts in the EU so there can be a co-ordinated approach. This also needs to include companies which consolidate mail and handle it before it comes in to the UK. We are actively pursuing this. We do not believe we have done any business directly with BDK Mailing GMBH since 2009.’

A spokesman for Whistl said it would ‘investigate all scam mail brought to our attention’. The spokesman said Whistl had bought the scam letters in from ‘an intermediary’ without knowing what they were or who the sender was.

‘We have no ability to see the actual content of the mail items,’ the spokesman added.

HOW THE UNITED STATES BANNED THE LETTER SCAMMERS

Royal Mail insists it can do little to stop the threatening clairvoyant scams being delivered through its bulk contract with Whistl.

Its attitude starkly contrast with that of its American counterpart, the United States Postal service.

When with the same vile letters began to arrive in America, it went to court, requesting an injunction to prevent ‘continuing and substantial injury’ to the ‘elderly and vulnerable’ victims of the letters.

It said the letters ‘purport to be from a person with psychic powers’ and seem ‘personalised’, but in fact ‘thousands of nearly identical solicitations are sent every month to potential victims.’

The US Post Office joined forces with the Department of Justice to ask the court for a restraining order against a Netherlands printing house responsible for the letters.

Brits who got rich helping conmen make their fortune

By KATHERINE FAULKNER and MARIO LEDWITH

A huge payment processing company run by a British businesswoman is helping to facilitate mass clairvoyant frauds against the elderly, the Mail can reveal.

Fraudsters who send the threatening scam letters to British pensioners use PacNet Services to process the cheques they get back from their vulnerable victims.

PacNet charges the fraudsters a fee for processing the thousands of cheques they receive from the victims, some of whom believe they need to pay for ‘protection’. 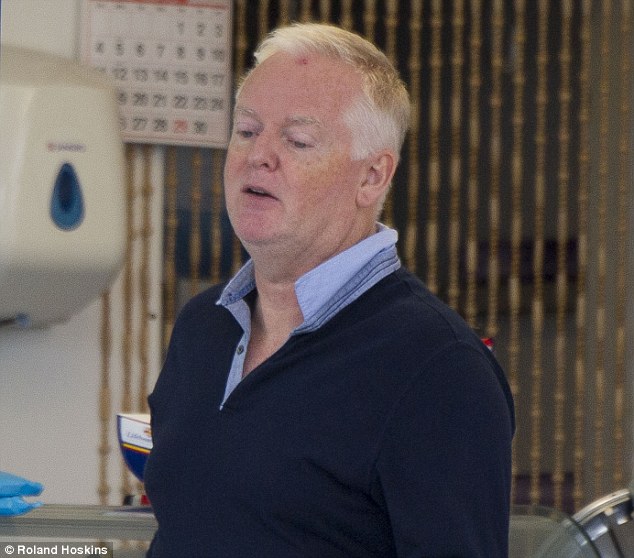 Robert Paul Davis, pictured, is the boss of PacNet Services that processes the cheques

The company, which is thought to make more than £100million a year, is run by Rosanne Day, a British woman from Somerset, and a British-Canadian man, Robert Paul Davis.

It stands accused by the US government of ‘knowingly’ helping postal fraudsters to hide the proceeds of their crimes for the last 20 years – and of being a ‘significant transnational criminal organisation’ engaged in mass ‘money laundering’ – charges the company vehemently denies.

The Mail can now reveal that PacNet even sponsored a lavish conference earlier this year, hosting conmen from Britain and around the world as they traded ‘suckers’ lists’ of fraud victims and discussed how best to ‘rip off’ elderly people. 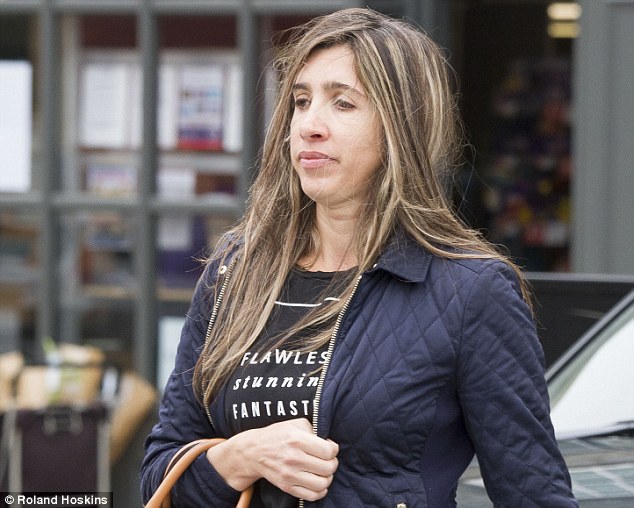 His wife, Monica Davis, pictured, is a managing partner of PacNet in her native Brazil

These included conmen behind some of the clairvoyant letters.

The conference – held in the Canadian ski resort of Whistler – was attended by an undercover reporter for the Daily Mail.

The company’s British founder and owner Mrs Day, from Yeovil, is thought to have stayed in a penthouse at the Fairmont Chateau hotel, which costs £1,100 per night.

They have a stunning £2million four-bedroom house on a tree-lined street but still own a holiday home back in the village of Barton St David in Somerset, worth around £500,000.

Mrs Day also owns two other properties in British Columbia, worth £850,000 and £316,000, according to Canadian newspaper reports.

Robert Paul Davis – who is a qualified pilot, and previously used PacNet’s plane to move huge bundles of the company’s cash around Europe, something which in itself is not illegal – has a number of properties on the Isle of Man. Despite being designated by the US government as the head of a ‘significant transnational criminal organization’ Mr Davis, 60, looked relaxed last week when he was seen on the Isle of Man. He was accompanied by wife Monica, 43.

She is the managing partner of a PacNet subsidiary in her native Brazil, but describes herself as ‘homemaker’ on company documents.

Companies based in British Columbia, Canada, are not required to make their accounts public. Sources, however, believe PacNet was generating well over £100million a year and charging around 3.5 per cent commission.

The US government last month seized PacNet’s bank accounts, banned its business operations and seized the assets of key figures after Attorney General Loretta Lynch declared it a ‘criminal organization’.

Mrs Lynch said: ‘PacNet has a 20-year history of engaging in money laundering and mail fraud, by knowingly processing payments on behalf of a wide range of mail fraud schemes.’

The company said it worked diligently to avoid working with companies that are operating fraudulently.

It said its designation as a criminal organisation was unconstitutional as it was not given an opportunity to answer the charges, which it denies.

It said it had been one of several conference sponsors at the NetworkingDM conference in Whistler, and ‘was not aware that any individuals in attendance were engaged in any kind of mailing fraud.’