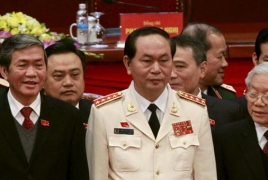 PanARMENIAN.Net – Vietnam’s parliament swore in Tran Dai Quang as president on Saturday, April 2 elevating the head of a controversial internal security agency to one of the communist nation’s most powerful political posts, according to Reuters.

Quang’s approval was a formality since he was the only candidate put forward by the party’s five-yearly congress in January. The outgoing National Assembly is overseeing the transition to a new government three months earlier than scheduled.

Vietnam has no paramount ruler and is officially led by a triumvirate of president, prime minister and Communist Party chief, although experts say the presidency is more ceremonial than the other posts.

The party runs Vietnam’s complex political system by consensus, with big decisions reached in secret by its 19-member politburo.

Quang, 59, is a police general who hails from the Ministry of Public Security, an organization with broad powers and a remit that includes intelligence gathering and thwarting domestic and foreign threats to the party.

It has been a focus of Western pressure on Vietnam to improve its human rights record and stop arrests, harassment and imprisonment of activists in return for closer trade and defense ties, including the full lifting of a U.S. arms embargo.

A resolution approving Quang’s presidency was backed by 460 of the 465 lawmakers who cast votes on Saturday. He swore his loyalty to the party and people.

Among his first duties will be meeting U.S. counterpart Barack Obama in May, the first visit to Vietnam by a U.S. president in a decade. Obama’s trip will cap off a two-year charm offensive by Washington that has coincided with Hanoi’s deteriorating ties with communist neighbor China.

Le Hong Hiep, a visiting fellow at Singapore’s ISEAS-Yusof Ishak Institute, said Quang may aspire to rise further up the power chain and his clout among the security apparatus could come in handy.

“Party leaders may see the selection of Mr. Quang as a safe bet due to his public security background, and that he will be able to protect the regime at a time when the party is coming under increasing pressure for political changes,” Hiep said.

On Quang’s presidency, he said: “It’s highly possible that it is just a stepping stone for him.”