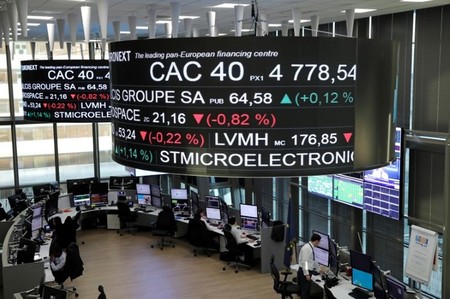 Global markets appeared largely calm on Friday, the last day of trading before the first round of France’s closely fought presidential election, with French bond yields hitting a three-month low and the euro treading water.

A fatal attack on police officers in Paris overnight caused investors some immediate jitters, with the gap between French and German 10-year borrowing costs — a key indicator of election nerves in recent months — rising sharply in the first few minutes of trading.

Traders said this was on concern the attack could sway the vote in favour of far-right anti-immigrant candidate Marine Le Pen, whose anti-European Union stance is of concern o many in the markets.

But that move reversed as the session wore on, with the yield on 10-year French government debt hitting its weakest since mid-January and the gap between it and its German equivalent falling to its tightest in three weeks. [GVD/EUR]

Although falling yields usually indicate investors seeking safety, in the case of the election uncertainty lower French yields imply a more steady-as-she-goes approach to the future.

Investors seem relatively confident that while Le Pen might well win enough votes on Sunday to make the second round on May 7, she will then be comfortably beaten, probably by the market-friendly, centrist candidate Emmanuel Macron.

European stocks edged down a touch, with the pan-European STOXX 600 index down 0.1 percent by 0910 GMT.

“So far markets have been pretty sanguine in the face of the (French) presidential election, which was flagged as one of the potential banana skins for markets in this year and I think that may be partly a result of political fatigue,” said Hargreaves Lansdown analyst Laith Khalaf, in London.

But options markets suggested investors remain worried about strong results for Le Pen and/or hard-left challenger anti-EU Jean-Luc Melenchon that would point to the risk of another major political shock for Europe in two weeks time.

“It is kind of reminiscent of the big events last year where people know that it is a binary outcome so the best approach is to remain as cautious as possible,” said Simon Derrick, head of the global markets research team at Bank of New York Mellon in London.

France’s CAC stock index fell 0.9 percent, though it was only around 2 percent off its highest levels since mid-2015.

Shares on Wall Street looked set to open marginally higher, with the main indexes having closed between 0.75 percent and 0.9 percent higher on rising expectations for first-quarter corporate profits.

Asian stocks ended the week on a positive note, unscathed by a U.S. trade probe on Chinese steel exports. MSCI’s broadest index of Asia-Pacific shares outside Japan added 0.5 percent, but was down 0.4 percent on the week.

Asian steelmakers were mostly steady or higher, as investors dismissed for now any negative impact from the launch of a U.S. trade probe against Chinese steel exporters, although Chinese companies shed some of their earlier gains. The move sent their U.S. counterparts surging over 8 percent overnight.

“The U.S. accounts for a small proportion of China’s steel exports,” said Yang Kunhe, steel analyst at Northeast Securities in Beijing, adding Northeast Asia and Africa have been growing markets for Chinese steel over the past few years.

“But if Trump’s probe translates into actions, it would increase the chance of trade friction, and hurt market sentiment.”

The safe-haven yen, which tends to move inversely to the Nikkei, was on track for its worst week against the dollar in seven, down around half a percent as nerves over geopolitical tensions have eased off a touch.

Chinese shares in Shanghai added 0.1 percent but recorded a 2.2 percent weekly drop, their worst since mid-December.

In commodities, oil prices edged lower and were on course for the biggest weekly drop in a month, over doubts that an OPEC-led production cut will restore balance to an oversupplied market. [O/R]

For graphic on world FX rates in 2017, click on http://tmsnrt.rs/2egbfVh