When all that glitters beckons 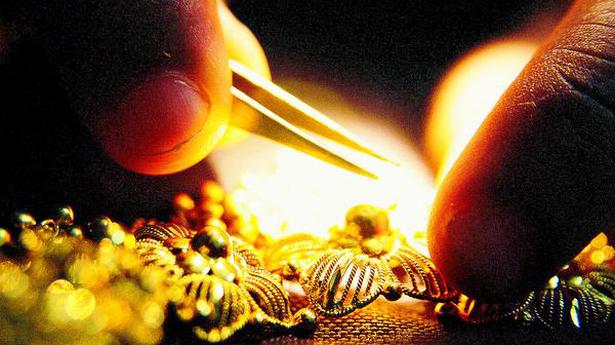 After diamonds, now it is time for jewellery of all kinds to glitter. Jewellery manufacturing in India, which dates back over 2,000 years, is being given an impetus to enable India emerge as a leading exporter of gold and diamond jewellery in the world. , Prime Minister Narendra Modi, in his visit last week to the diamond city of Surat, reiterated his vision to make India the gems & jewellery hub of the world.

“Enough of just diamond cutting and polishing work. Now we have to be number one in gems & jewellery, not only in ‘Make in India’ but ‘Designed in India’ jewellery in the world,” he said.

The diamond cutting & polishing industry may be only 60 to 70 years old in India but the country has established its dominancein the global market. Today, 12 out of 14 diamonds sold in the world are polished or cut in India. In value terms, India has 60% market share in the global diamond market and in volume it is 90%.

The aim of the government now is to have India corner more than 50% of the jewellery exports market currently dominated by manufacturers from Italy, Turkey, Germany and Hong Kong.

The government has asked the industry to layout a roadmap to boost exports and has assured all help including skill development of artisans and jewellery manufacturing. Skills become critical as the global market demands fashion jewellery, unlike heavily fabricated jewellery which are in demand from customers in India and people of Indian origin.

“Once that is done, jewellery exports will increase. Today we are not exporting much as we lack the capability to manufacture designs foreigners want,” Mr. Srinivasan said,

Indian manufacturers have the expertise to make 22 and 20 carat gold jewellery but exports market demand jewellery that are made of 8 or 10 carat gold.

Buyers in the U.S., the biggest exports market for jewellery, are fashion oriented and buy lightweight jewellery that does not cost much.

So India needs to go for large scale production of jewellery through machines to cater to the global demand.

“For that we need to set up common manufacturing facility as every jeweller does not have money. Besides, we need to increase our ability to understand the fashion trends of foreign buyers and come up with designs that they would like,” Mr Srinivasan said.

The global retail jewellery market is estimated at 2,900 tonnes per year and Indian and China are the biggest consumers. In the exports market, the U.S., Europe and UAE are the biggest followed by Japan and Australia.

Sanjay Kothari, CEO, Diatrends Jewellery and past chairman of the GJEPC said, “For us sky is the limit. We are now developing the managerial skills of people to run the factories. We are also training workers for the same.”

The Indian Institute of Gems & Jewellery (IIGJ) located in Mumbai is being strengthened for capacity building and skill development across India. It is opening two more branches in Varanasi and Udupi to support jewellery making in those areas. It is also increasing the student intake to help India achieve the desired objective in the jewellery business.

“In jewellery we are meeting around 10% of the global demand. We want to achieve 60-70% share. Hong Kong is famous for studded jewellery, Italy is famous for plain gold jewellery. We have the capability to manufacturing and supply both these types. Easily we can increase out share to 30% within five years,” Mr. Kothari said.

Industry insiders said jewellery exports could not achieve full potential due to apathy of successive governments.

“India did not give any attention to the jewellery sector all these years,” said Ashok Minawala, past president of Gem & Jewellery Federation. “We are selling jewellery to countries where Indians are there. We never tried selling much to an American or a German in a big way. The market has tremendous potential,” he said.

He added that the government must support the industry. “There has to be ease of doing business. Today, it is a nightmare to export a shipment of jewellery. It is not the same with diamonds. The amount of documentation that takes place deters people from export,” he said.

“Foreigners go to Dubai and find out about India. When they go to Gold Souk in Dubai, 90% of the jewellery is from India, the people selling jewellery are Indians. But the credit goes to UAE and not to India. UAE could turn Dubai into the city of Gold but not India which had everything in its favour,” Mr. Minawala said. Jewellery exports to the UAE in 2016 were close to $5,527 million compared with the U.S. to which exports amounted to about $1,676 milloin.

Indian exporters have prepared an export promotion strategy and a target of $60 billion worth of gems and jewellery exports in five years, from last year’s $35 billion which included over $22 billion from exports of cut & polished diamond.

“We have set a jewellery exports target of $60 billion by 2022 in a detailed vision document. Apart from generic promotion, we would focus on hand-crafted jewellery and value addition to achieve the target,” said Praveen Shankar Pandya, chairman, GJEPC.

In their revised strategy, Indian diamond exporters are planning to reduce exports of cut and polished diamond pieces and focus more on shipment of value-added products which include studded jewellery.

“Apart from the Middle East, European and American markets are reviving which is a good sign to achieve higher export growth. So, we are aiming at higher exports through value addition, brand promotion and re-orientation of rough diamond import strategy through its auction sale in India,” said Sabyasachi Ray, executive director, GJEPC.

Currently, Indian jewellery manufacturers are primarily shipping out unbranded products to overseas importers who then tag these products with their own brand and charge a premium from buyers. Indian jewellers are now planning to shift from unbranded to branded jewellery for higher value realisation.

GJEPC, with the help of the commerce ministry, is setting up a gold craft and design institute at Udupi in Karnataka to reskill local artisans. The institute, which is aimed at reviving manufacturing activity in Dakshina Kannada cluster, will have a common facility centre to help artisans of the Udupi region work with state-of-art machines in the jewellery sector.

Similarly, a jewellery park is being planned in Mumbai and also in the offing is a university for ,ewellery.

However, it is no easy job. A leading jeweller said, “The PM wishes that we should focus more on exports than the domestic sector. It is just like asking a Kirana to get into exports. It is not that easy. The dynamics are different. A jeweller is essentially a Kirana store and a massive transformation is required to achieve the goal.”