When Vidhana Soudha precincts were thrown open to the public 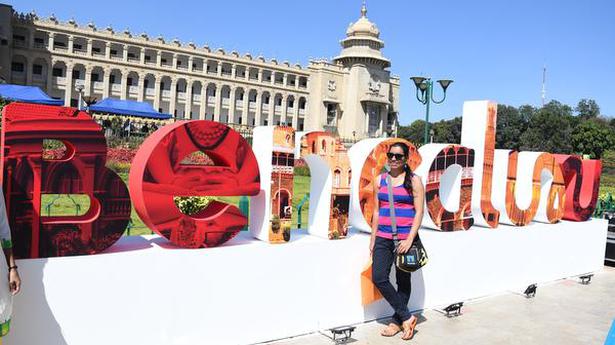 Entry of public to the precincts of the imposing Vidhana Soudha is strictly regulated at all times. But the second edition of Namma Bengaluru Habba (the first edition was at Sankey tank), organised by the Department of Tourism here on Sunday, saw the government throwing open the gates to the premises to the public. This resulted in several Bengalureans taking a trip down memory lane.

For many visitors such as Kiran Kumar and his wife, Savitha, residents of Chamarajpet, Sunday’s habba brought about nostalgia. “We used to come here before the government banned public entry to the premises. I remember sitting on the benches here,” Ms. Savitha recollected.

The event, which showcased performances by music bands, apart from display of paintings and artwork, cycling, skating stunts, and photography contest, attracted a large number of people.

The city’s own logo

Bengaluru joined cities such as New York, Melbourne and Singapore to have its own tourism logo, which was launched at the event. “After months of brainstorming and planning, we have launched the logo that captures the spirit of the city and its people,” Tourism Minister Priyank Kharge said. The logo was selected out of 126 proposals. A prize of ₹5 lakh would be given to the artist who designed the logo.