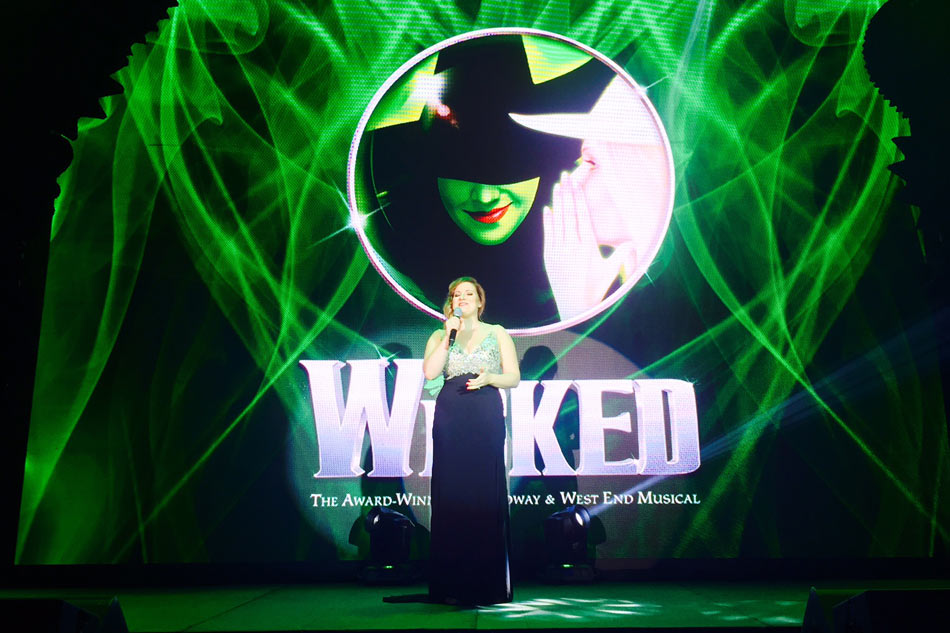 Jacqueline Hughes, who plays Elphaba in “Wicked,” sings “The Wizard and I” at the media launch at the Diamond Hotel on Friday. Vladimir Bunoan, ABS-CBN News

MANILA — Theater fans are in for a treat when the international musical hit “Wicked” flies back to Manila in February next year since they will get to see “new little extra things” that have been added to this theatrical re-imagining of the classic “Wizard of Oz” story.

Company manager Anthony Field promised that Manila theatergoers will see an improved version from the one currently playing in Broadway and London’s West End.

“As a bonus, there’s new stuff that we have in this particular version and I know for a fact that the other productions all over the world don’t have,” he told ABS-CBN News after the press launch on Friday. “We’ve added some magic to some of the scenes, which is a big selling point.”

Such extras would hopefully convince Filipino fans to watch the musical again just three years after “Wicked” made its Manila debut at the Cultural Center of the Philippines in 2014 and enjoyed an extended run.

That production of “Wicked” was from Australia, while this new international production, which will open first in Singapore later this month before going to Hong Kong and Manila, just finished a two-year, record-breaking tour of the UK and Ireland, which was seen by over 1.5 million people in 15 cities.

This production of “Wicked” will open on February 2 at The Theatre at Solaire, where it will have a limited four-week run.

“As a British company, we were very lucky to get to work with the original American creatives two years ago when this particular tour was established in the UK. They re-examined the play and it’s very true to its origins and its roots,” Field said.

That group included original choreographer Wayne Cilento. “He kind of wanted to develop some stuff that he’s been wanting to do for a long time,” Field said.

Field, however, didn’t elaborate on the changes, although he hinted that there will be “some new flying, some new tricks, and new stuff to the story.”

The new tour also celebrates the 10th year of “Wicked” in London, where it has already played over 4,000 performances.

“We have this fresh show that’s still going strong after two years with this new cast and these new little extra things,” Field noted.

This new production is headlined by Jacqueline Hughes as Elphaba, who has been with “Wicked” for five-and-a-half years, starting out in the ensemble.

“I had a long journey with ‘Wicked’ and Elpheba being the ultimate goal. Now that I managed to have her all to myself, I feel very, very fortunate and very lucky,” Hughes said at the press conference, where she also gave a sneak peek with a performance of “The Wizard and I” and the duet “For Good” with Carly Anderson who plays Glinda.

The two have earned raves during the tour. “She held the audience in her grip, from the intimate scenes when she struggled with rejection, love and friendship… to the huge, show-stopping numbers like ‘Defying Gravity,’ when her powerful voice finked the packed auditorium,” the Telegraph & Argus said of Hughes.

“Anderson was delightful as Glinda, delivering a flawless comic performance that was equally touching,” it added.

The two actresses are enough reason for fans to watch “Wicked” again.

“I think ‘Wicked’ is lucky enough to have these very loyal fans that are drawn back again and again through the story and the love of the music and the costumes. I think those guys will help support us and are very amazing and we are blessed and very grateful for that,” Field said.