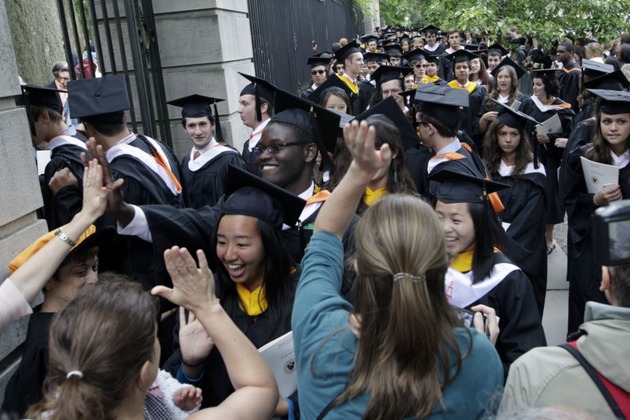 For the first time, the number of international students in the United States topped 1 million over the past year, according to a report by the Institute for International Education (IEE). But some educators and students say comments critical of China and other countries by President-elect Donald Trump have the potential to affect international enrollment in U.S. universities and colleges.

Comments made during campaign speeches – such as “we’re going to build a wall, it’s going to be a real wall,” and “Donald J. Trump is calling for a total and complete shutdown of Muslims entering the United States” – got a lot of attention from foreign students in the U.S., as well as international students thinking about attending U.S. colleges.

Erica Wang is one of 6,000 Asian students at the State University of New York at Buffalo. A second-year master’s degree student in international trade, she says the concept of freedom is what attracted her to the U.S – an educational system that is open, encouraging and helpful to students choosing their own paths.

But now she is a bit worried.

“I’ve heard a lot about what he [Trump] said when he was running for office,” Wang told VOA. “I would still be looking to see if he is going to do whatever he promised. Are his potential policy changes going to affect us? Because I have heard a lot of panicking among my friends, definitely.”

“This is a country of laws, checks and balances, so the president of the United States is not a dictator, not a king,’ he told VOA. ‘Some things he can decree, but many things will have to pass the Congress and some will pass the scrutiny of the courts.”

However, Dunnett, who just returned from China, says the recent call between Trump and the leader of Taiwan had many in China talking.

“The Chinese were quite taken aback by what appears to them to be the sudden abandonment of the ‘one China’ policy,” he said. “Some colleagues said to me, ‘This will come at a price. There are an awful lot of our citizens studying in your universities. That’s a huge capital outflow from our country, and if you are not going to be welcoming to us, then maybe our students shouldn’t go there.’ ‘

No U.S. president or president-elect had made direct contact with Taiwan since President Jimmy Carter cut formal diplomatic ties in 1979, recognizing Taiwan as part of “one China.”

Evelyn Levinson is the director of international admissions at American University (AU) in Washington, D.C., which has about 1,500 international students from 147 countries from Afghanistan to Zimbabwe.

“There is no crystal ball right now to say what will happen, but certainly a lot of questions were raised,” she said.

In the meantime, AU has been working hard to continue to attract international students. The admissions staff has reinforced the school’s message of tolerance to reassure potential applicants and their parents. And they have been traveling.

“This fall, we went back out to cities in Europe,” Levinson said. “I personally was in the Middle East and in Central America, and someone else from our office was in Hong Kong and Singapore.

“Right now, we are only off by 2 percent compared to last year, but I am confident the audience that has been interested in us is not going to wane.” She added that after the admissions deadline, January 10, “we’ll have a better sense, but I’m not feeling any drastic changes.”

Besides paying tuition, international students participate in local and state economies in many ways by paying rent, paying bills and shopping where they live, Levinson noted. But in a global world, more than money, she says, they bring valuable international perspectives into U.S. classrooms.

During the campaign, Trump promised to curtail or end the H-1B visa program for high-skilled foreign workers, which might discourage international student enrollment because it would be harder for students to find jobs in the U.S. after graduation.

“When you are thinking about your home and your possible future home in the U.S, it’s not very certain anymore,” said Joshua Ong, an economics student from Malaysia at the University at Buffalo. But Ong encourages people to study in America because the “U.S. is a lot of fun.”

IIE President Allan Goodman says he doesn’t think international student enrollment will ultimately be affected. Nearly 100 years of data collection by the institute has shown no major changes, just a small drop for two years after the 9/11 terror attacks.

“The trend in our experience through very difficult periods suggests that higher education sets its own foreign policy,” Goodman told VOA, “and it’s not a foreign policy of isolationism.

“We’ve looked at it through periods of recession and depression hellip; war and conflict.”

Goodman says people are coming to the U.S. because of the long tradition the country has in welcoming international students and because Washington doesn’t run the country’s higher education. What matters, he says, is what the individual campuses are doing during their outreach.

Previous Year in Review 2016: A recap of Barack Obama’s last year as president of the United States
Next Aborigines of north are now dying out