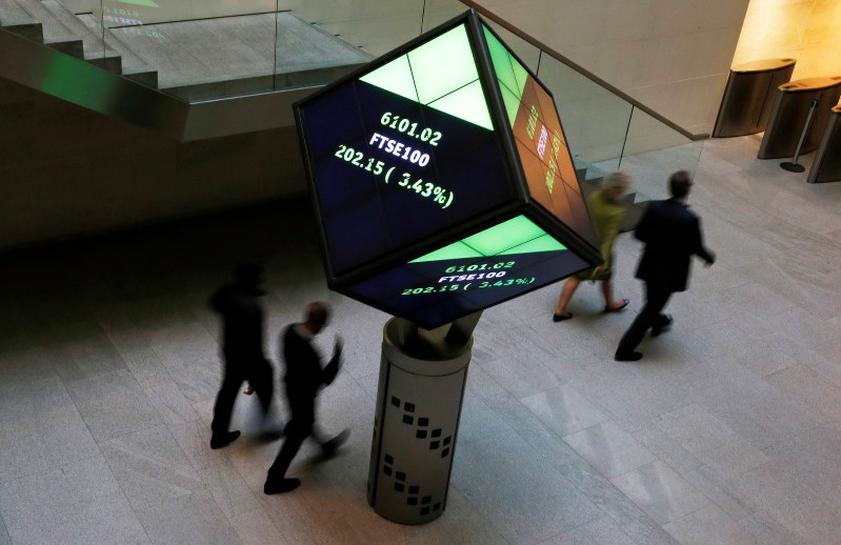 People walk through the lobby of the London Stock Exchange in London, Britain August 25, 2015.

LONDON World stocks climbed for the first time in four days on Tuesday and a weaker dollar helped oil prices gain too, as investors fine-tuned their expectations for monetary policy meetings in the United States and Japan.

Those gains helped the MSCI world equity index .MIWD00000PUS, which tracks shares in 45 countries, inch up 0.1 percent after three straight days of losses, taking it back towards an almost-five-month high touched last week.

Ahead of the two-day Federal Reserve meeting starting on Tuesday, Huber said “many traders are at least temporarily moving their overall exposure to more neutral from previous negative, consequently closing some of their short positions.”

Markets see no chance of a U.S. interest rate increase and are pricing in about a one-in-five chance of a move at the next meeting on June 14-15. A surprise drop in new U.S. home sales data for March on Monday added to evidence of anaemic U.S. economic growth.

Nevertheless, Fed officials have repeatedly said a hike in June is on the cards.

“So the Fed may try to urge markets to price in higher rates. On balance, we are more likely to have a hawkish surprise than a dovish surprise,” he added.

The yen, which tends to have an inverse correlation with Japanese stocks, climbed for a second day, with the dollar falling a third of a percent to 110.80 yen JPY=, as prospects of more monetary stimulus this week from the Bank of Japan, which begins a two-day meeting on Wednesday, remained unclear.

Late last week the yen tumbled to three-week lows on speculation that the BOJ would introduce more easing measures, but analysts said those expecting aggressive monetary loosening may be disappointed.

Sterling strengthened to a ten-week high against the dollar GBP=D4, building on Monday’s gains as investors bet more heavily that Britons would vote to stay in the European Union at a referendum in June, following an intervention from U.S. President Barack Obama on the side of the “In” campaign. [GBP/]

“We’ve seen equity funds positioning more for a ‘Remain’ vote, and the (currency) bounce that will cause,” said the head of hedge fund sales with a big bank in London.

Against the euro, too, the dollar edged down EUR=, leaving it 0.3 percent lower on the day against a basket of major currencies .DXY.

As well as the weaker dollar, oil prices also benefited from hopes of an easing of the global oil glut. Brent crude futures LCOc1 traded up half a percent at $44.75 per barrel, while U.S. crude futures CLc1 were up 27 cents, at $42.91 a barrel.[O/R]

An unexpected bond sale from the euro zone rescue fund kept German Bund yields near five-week highs on Tuesday, as worries grew that a recent rise in yields resembled the prologue to a brutal sell-off that occurred in 2015. [GVD/EUR]

(Additional reporting by Atul Prakash and Patrick Graham in London, Hideyuki Sano in Tokyo and Nichola Saminather in Singapore; editing by John Stonestreet)