YOURSAY | ‘If unchecked, I’m sure the next step would be non-Muslims cannot employ Muslim maids.’

‘Hire only Muslim maids’ ruling for Muslims a general guideline 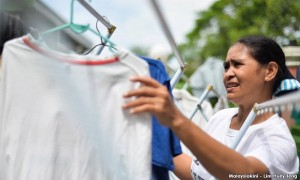 Vijay47: This now-you-see-now-you-don’t rule that Muslim families should employ only Muslim maids is only half the religious gem from the Immigration Department – the corollary is that non-Muslim maids should not work in Muslim households.You will never guess the reason for this. It is that if a non-Muslim maid works with a Muslim family, she may influence the children and even the whole family towards her own faith, especially if she is a Christian. And Muslim maids in a non-Muslim environment may end up a Hindu, Buddhist, or worse, a Christian.

After spending billions for the propagation of Islam and having only Muslim programmes on TV and radio and that too all day long, Muslim bodies can only worry that even the least exposure to non-Muslim faiths would see the famous outcome of Muslims being confused and their faith weakened.

Annonymous: The fact that such ‘guidelines’ even existed is bad enough and it’s an evil, discriminative and racist law and a breach of basic human rights. It’s none of your business whom I wish to employ.

Why are Muslims allowed to work in a non-Muslim home but not otherwise? Former DPM Musa Hitam was right, Malaysia is surely descending into an extremist and failed state.

The supremacists in power cannot see the crime committed against their own kind by throwing billions, creating the biggest welfare state in the world favouring only the majority.

The reverse situation will certainly happen (when Malaysia exports maids) should those in power continue to rule – Malaysia’s oil wells run dry, corruption runs free, the economy collapses and the nation is bankrupt while our neighbours and other countries in the world progress, and exacerbated by the population explosion of the majority in the country who survive on a welfare state basis.

How long can the minority feed the majority? Even Saudi Arabians employ foreign ‘infidels’ as maids.

Fairperson: This is the most inconceivable decision by the Immigration Department. “This is just a general guideline with many exceptions and considerations.”

The idea of employing a maid based on a particular religion should not have come up in the first place.

If unchecked, I’m sure the next step would be non-Muslims cannot employ Muslim maids. Just watch.

BohChaiSee: If it’s not a strict rule, then just do away with it. Why cause unnecessary problems for people who just want to hire domestic help?

Falcon: Be fair, friends and commentators. If we want to blame, let’s lay the blame where it should be.

As far as I can remember, this was a condition that has been prevalent for decades even before director-general (DG) Mustafar Ali took office. So it is not proper to blame him.

In fact, since his arrival at his present position, he has been facilitating and spearheading positive change. And this is what we all want. Be gentle with your comments as Mustafar is one of the good guys.

Bluemountains: What about Muslim children who go to Chinese schools where the subjects are mostly taught by non-Muslim teachers?

Are they not afraid of the Muslim children being influenced by non-Muslim teachers?

888: What about runaway maids, which is a racket rampantly practised in this country. What about the huge disparity in agency fee for domestic maids between Singapore and Malaysia.

Olympic gold – one step away from making history

Hats off to all Malaysian athletes who worked hard to achieve glory in the Rio de Janeiro Olympics.

Ali Baba: I can’t imagine Goh Yiu Lin reportedly just had both her knees operated on about a year ago. What a tough lady. Hat off to you.

VP Biden: Well done. They are not Chinese athletes; they are Malaysian athletes. And we wonder why there is disunity in this country.

Batu Api: Yes, congratulation. Hope this will restore back a bit our country’s dignity after such a shameless series of continuing scandals.

Mosquitobrain: But nobody can beat Malaysian Official 1 (MO1).

He has pipped everyone and secured Malaysia its first gold medal long before the Rio Olympics by breaking the US record for ‘Biggest money laundering’.

For the gold and world’s record, MO1 gets himself rewarded with RM2.6 billion.