YOURSAY | ‘If you are so fervent in your work, enough of the ‘wayang’ of dishing out warnings.’ 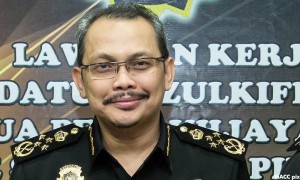 Trueglitter: Malaysian Anti-Corruption Commission chief Dzulkifli Ahmad, your appropriate and timely emergence to assert your principled and ennobled advice to the elected representatives, particularly the political and community leaders who are now holding the reins of power, to not betray the people’s trust to achieve their nefarious objective to serve their own selfish ends, is profoundly lauded and immensely appreciated by the general community, as it undeniably carries the welcome message of hope for especially the downtrodden whose piteous and relentless cries for justice and the right to live in peace and harmony have long been ignored.

It is opportune to reiterate that the once highly regarded MACC, which image has now been severely battered and tainted by incessant allegations of complicity and unconcealed bias towards particularly the powers-that-be, will now have you as its candidate, who like a “black knight in shining armour”, will redeem as well as enhance its invaluable image and reputation.

Monty: This is a good step in your first 100 days in office, Dzulkifli. I guess it was spent understanding the massive problems you have and working out how you are going to handle them.

Now for the next step, you need to show, yes, really, really show what you are going to do about these massive problems.

You have the loyalty and support of your staff and you can also be sure you have the support of the Malaysian public, so please go out and do something for us and for the country’s future.

Corruption is destroying us and must be halted before it truly destroys us.

Kingfisher: This is a bold pronouncement by the MACC chief. It is quite clearly perceptive of the prevailing circumstances of corrupt practices and abuses of “elected representatives” and “community leaders”.

And also, quite graphic references to the corrupt – to “stop lulling the people with fables and fairy tales which hide the truth, when at the same time you greedily grab the spoils of corruption.”

The chief commissioner’s urgings directed at those who are betraying the public trust is an equally refreshing change to what a number of Malaysians perceive to be a hypocritical atmosphere of pretending that all is well and manageable.

Hopefully, the strong conviction demonstrated in the commissioner’s ‘100 days in office’ speech will witness increased vigilance and enforcement on corrupt practices in the future, and especially bring direct chastisement onto the ‘sinners’, that is, the corrupt.

Godfearing: But how come MO1 (Malaysian Official 1) is completely immune to this laudable process? It’s unbelievable that these officers can’t see the elephant in the room.

Does this mean the process allows important exceptions? If so, what kind of justice is this?

Vijay47: Dzulkifli, in the hierarchy of law enforcement and police, you are not the highest-ranking officer, but when it comes to anti-corruption action, you are numero uno and nobody can overrule you. At least on paper.

If you are so fervent in your work, enough of the ‘wayang’ of dishing out warnings. That time has long gone. Just get out of your office and start nabbing the crooks from the very top, beginning with the biggest one in the world like the Sarawak laksa bowl.

That biggest crook – a national pride or shame depending on how you look at it – is currently enjoying a bowl of wan tan mee, no mushrooms, please, in some imperial palace and trying to speak Mandarin.

The next one to arrest is a guy, a storyteller who shared with us the secret that if a bribe is returned, at least in part, it is no longer a bribe or corruption. Book him for abetment.

We are all fed up of officers puffing out their chests like Rambo but are actually only pussies. Give us reason to believe you.

Rmn: Dzulkifli, your 100-days-in-office hard talk would be futile until you show us, the rakyat, your definitive actions on the 1MDB case, leading to the prosecution of the criminals involved.

Alunan Ombak: Unfortunately, Dzulkifli, Malaysians generally know you are PM Najib Razak’s hand-picked stooge to head MACC. We know to whom you owe your loyalty.

Martha: Are you really serious, Dzulkifli? First, you need to begin from the top. Do you have the stomach for it?

Perhaps you might be the Duterte that Malaysians are looking for. Our country is being robbed, raped and whatever term you might put it by these scoundrels who have not a single ounce of conscience, let alone compassion.

They are nothing but a bunch of greedy blood-sucking vampires who are sucking the rakyat dry.

Headhunter: Indeed, stop the drama and go after those who are obviously living beyond their means. Palatial mansions, expensive cars, exotic holidays; these are the obvious tell-tale signs that the MACC need to zero in.

Negarawan: When no action is taken against the perpetrators behind 1MDB, this is in itself an act of corruption. In doing so, Dzulkifli should ask himself if he has betrayed the rakyat.

Seven countries, including the US Department of Justice (DOJ) and Federal Bureau of Investigation (FBI), are actively investigating the massive corruption behind 1MDB.

Many charges and arrests have been made in the US, Switzerland and Singapore. No action has been taken against the main perpetrators in Malaysia.

Bersatu Malaysia: Yes, what about 1MDB? You mean to say no one is corrupted here in Malaysia while Singapore is already prosecuting the culprits? It is getting harder to believe Malaysian authorities.

Anonymous #21828131: Dzulkifli, if you suddenly woke up tomorrow and start taking action against MO1, nobody – and I repeat – nobody will fault you for it.

If they do and come “up with fables and fairy tales”, charge them too for being accessories to the alleged crime.

At this stage of the ball game, nothing can happen to you. Allah will always be on your side. You will be the catalyst to rid corruption in this beautiful country of ours.