YOURSAY | ‘Minister, what have you got to say about the 15 questions?’ 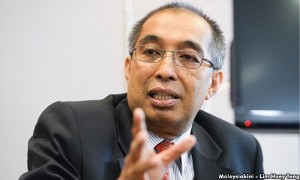 Trueglitter: As expected, the questions appropriately designed by widely-respected politician Lim Kit Siang to seek the required clarifications and factual answers from Communications and Multimedia Minister Salleh Said Keruak would presumably be beyond the latter’s comprehension and ability to provide the necessary information requested.

The regrettable scenario has invariably been exacerbated and well be attributed to the deeply-entrenched mindset of all Umno politicians, staunchly impregnated with the party’s menacing ideology to disburse only the half-truths or none at all on political issues that matter via playing “possum” in face of an avalanche of questions presented by particularly the opposition such as these.

It is a foregone conclusion that the opportunistic Salleh would endeavour his utmost to abscond from his responsibility to furnish the public with the required answers by allowing the usual Umno paid cybertroopers to post their nonsensical comments on Umno’s behalf.

Anonymous 1890491455255851: Umno ministers are too arrogant and thick-skinned to even consider answering questions.

But they are also too thin-skinned to be able to take criticisms or be made a joke of by political cartoonists. They represent everything any right-thinking individual should reject in their government.

Pemerhati: The government’s attempt to ‘cheat’ with the Programme for International Student Assessment (Pisa) scores in question 5 of Kit Siang’s 15 questions should not come as a surprise.

Year in and year out, they give the impression that admission to public universities is based on merit by equating the non-standardised and easy ‘matrikulasi’ examination results with the much tougher STPM (Sijil Tinggi Persekolahan Malaysia) results.

In fact, now there is so much cheating and lying by our top political and public officials, it is difficult to believe anything they say.

For instance, the US government investigations have revealed that the US$681 million deposited in PM Najib Razak’s account were stolen from 1MDB, but the PM says that the money was a donation by some Arab royalty. The deputy PM and other ministers support him.

The police and Malaysian Anti-Corruption Commission (MACC) allegedly lie following deaths in custody and the pathologists allegedly lie to help the police cover up the deaths.

And the Election Commission helps BN win elections through allegedly massive cheating and the list goes on.

The Analyser: If you want to elect a party to Parliament simply on the basis of race without knowing the first thing about what they have in store for you and the country, go for it.

So, if you want the Chinese version (shudder) of BN, go ahead, support this collection of selfish autocratic duck heads… or maybe move to Singapore or PRC (People’s Republic of China) where you will find all the repression and the money you so desperately need to mask your insecurities.

Gerard Lourdesamy: What is The Analyser raving and ranting about? If DAP is racist, PKR a joke, Amanah a non-entity, Bersatu a lackey of former PM Dr Mahathir Mohamad, Warisan an illusion and BN a fake, who do we vote for? Umno and PAS, is it?

Or maybe we just don’t vote at all and spend the next 50 years analysing ourselves in the vain hope of creating a Utopian state.

And why shouldn’t Umno be blamed for our failed nationhood? They have been running the show since 1955.

The problem with The Analyser is that he cannot tolerate any criticism of the Malays or Islam by non-Malays or non-Muslims, constructive or otherwise, because deep down he suffers from the same entitlement complex as many others in this country.

All the talk about fairness and equality is nothing but intellectual dishonesty.

Anonymous #33227154: The Analyser is a hypocrite. He insinuated that he cares about Malaysia regardless of race and religion, and yet he keeps on spewing racist and hate comments against the Chinese and occasionally against the Indians, too.

He only chooses to selectively condemn DAP just because they are mainly Chinese, but never PAS which is blatantly corrupted (see their appalling treatment of the Orang Asli in Kelantan).

CQ Muar: Wow, that’s a whole load of questions Salleh needed to fumble for an escape route – cracking his head not just over one sleepless night, but a whole week of head-pounding.

In any case, there is no need to damage your brain; just come up with the standard Umno-BN cock-and-bull excuse – avoid the answers and remain silent. Problem solved.

Hot Khong: Penang BN chief Teng Chang Yeow’s behaviour of taping his mouth is very foolish. If he has any proof to back his accusation, then bring that to the public.

The public expect facts/data. Don’t do these silly stunts and expect the public to empathise with you.

RM2.6 Billion Turkey Haram: Teng, if you are serious you should direct all your energy at MO1 (Malaysian Official 1), who is an alleged thief locally and internationally.

And the amazing thing is you cannot see it. You should seal your eyes as well and stuffed your ears too.

RKR: This country is never short of clowns. There was one guy with white towel around him and wants to take a bath in MB’s office. Then there is this guy whose action makes no sense at all.

Previous When They Go Bang!
Next Money problems for other leagues