YOURSAY | ‘Perhaps Lim did not pray as hard as Najib’s associate Jho Low.’ 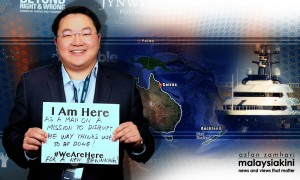 Pemerhati: It would appear that Lim Guan Eng did get the house cheaply and most probably businesswoman Phang Li Khoon was hoping that she and her associates would get some favours from the Penang chief minister in the future.

Business people everywhere try to get into the good books of the people in power by doing them special favours in the hope of getting business favours in return.

Even in squeaky clean Singapore, it was alleged that Lee Kuan Yew and son bought two units of condominiums from a friendly developer in October 1995 at huge discounts.

Kuan Yew got S$416,252 while the younger Lee received S$643,185 in discounts. When there was public uproar and the matter was highlighted by the opposition, they donated the money to charity.

There were no criminal proceedings against the Lees as it is not a criminal offence to buy something at a cheap price.

This charge against Lim is an effort by PM Najib Razak to try and discredit Lim and probably do an ‘Anwar’ (who is unfairly imprisoned the second time) on him.

Prudent: Section 165 of the Penal Code is very broad and specific.

It depends on Lim’s ‘knowledge’ whether Phang is likely to have interest in proceedings/business (for example, Taman Manggis Land and conversion of Phang’s land from agriculture to commercial use) which Lim, in his capacity as a public official, can transact.

It also depends on the other facts in the case such as the ‘market value’ of his bungalow, etc. It’s a lawyer’s paradise.

Mojo Jojo: No one from the federal opposition is stupid enough to think that they are untouchable. The only ones who think so are those from the ruling coalition, which has been in power since Merdeka.

This is why someone has the guts to receive blatant sums of `foreign donations’ in his bank accounts.

There are reasons why true democracies have laws forbidding foreign donations in electoral campaigns – to avoid leaders being bought by foreign powers and committing treason.

Anonymous 24331438100949: This is the reason why public officials have to be extra careful, what more when you are a politician.

Malaysian politicians, opposition included, must bear in mind that when you hold public office you are closely scrutinised.

Forget about being fair or not. Don’t compare yourself with Umno-BN as you have promised the rakyat that you will lead a clean and corruption-free government, in every sense of the word.

But if you also got carried away, you will have to pay the price, especially when you are on the other side of the political divide.

HaveAGreatDay: The moment the Bungalow-gate broke, Lim is damaged goods. Don’t get me wrong – in all likelihood, it may be just a ‘willing seller, willing buyer’ deal.

Yet, in the corrupt political scenario of our country, a politician of Lim’s standing ought to realise he is figuratively putting himself in a very compromising position by entering into that house deal.

Well, what is, is! The opposition is already in disarray, so Lim’s case is just adding more soiled ink into what is already an ugly mess.

Maplesyrup: The sum of RM2.6 billion went into the personal bank accounts of someone, which international monetary regulators allege to be money laundering but here, we call it donations.

Money from a government agency went into the personal accounts of an individual, but he said he did not know about it, and there was no follow-up after that.

The man who sacked the attorney-general and threatened those connected with the investigations, is that not abuse of power?

We deserve the government we get, whether we personally voted for it or not.

Amateur: Perhaps Lim did not pray as hard as Najib’s associate Jho Low. Low is alleged to get US$1.03 billion as owner of Good Star Ltd from 1MDB.

Lim is alleged to buy the RM2.80 million bungalow below market value. He is hauled up within four months after the allegation. Jho Low is still scot-free after more than two years.

Shamu99: It’s fine if there is evidence of corruption and Lim is tried in court. But what about BN politicians?

What about the ministers who are living beyond their means? And why is no one chasing Jho Low?

What about the case of the RM40 million cash which was carried into Malaysia from Hong Kong, where the Malaysian Anti-Corruption Commission (MACC) cleared Musa Aman of any wrongdoing because the money was allegedly for Sabah Umno?

Wg321: A certain VVIP thinking is like this – if I am going to be drowned by outsiders from US, Europe and Asia, I shall make sure you will be drowned like me.

Odin Tajué: In a land where you find a politician despatched off to jail for defending a girl in her teens who had been statutorily raped and the rapist went scot-free, justice and fairness are a rare commodity indeed.

And a speck of dust can be magnified into a mountain of rocks, while a rubbish dump can be reduced to a bottle of perfume; it all depends on who is associated with the dust and who with the dump.