YOURSAY | ‘The drop in the value of the ringgit is like the money you owe your credit card issuer.’ 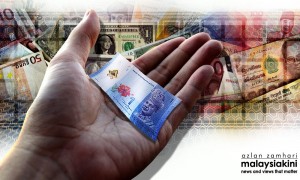 Odin Tajué: Second Finance Minister Johari Abdul Ghani, if you want to delude yourself, that is your business. But in trying to delude others, you are only making yourself look like an idiot.

Of course, the ringgit will bounce back. The question is, bounce back to which level? But the answer to that question means nothing. Because you can pick any level in the present decade that suits your purpose.

The important point to note is that the drop in the value of the ringgit is like the money you owe your credit card issuer. The more you borrow, the harder it is to repay what you owe until you get to the stage when you have to declare bankruptcy – as has been happening to many Malaysians.

If one looks at the trend of the drop in the ringgit, one will find that it has never recovered. Never, you understand? It has not recovered even to the point just before it was pegged against the greenback and never mind to a point sometime in the 70s.

You all have failed, and failed miserably, to manage Malaysia’s economy even properly and never mind well. You all have been too busy doing we all know what.

Clever Voter: Johari knows that his colleagues had not expected the ringgit decline. The assumption was that revenue from petroleum exports would have cushion the shortfall of the 1MDB.

Secondly, they had not expected commodity prices to stay bearish. We could have done better to diversify our economy. The so-called resilient economy is put to a test with a broken governance structure.

The final analysis is that perception counts. The likelihood is that the ringgit will remain in the doldrums for quite a while.

Dont Just Talk: Johari, you failed to mention the crux of the issue, which is the rampant corruption in the country, with 1MDB taking the top prize.

Your boss, MO1 (Malaysian Official 1), received US$681 million into his personal account and MO1 was mentioned 36 times by US Department of Justice as someone who holds a high position in the government, a close relative of Riza Aziz and an associate of Jho Low, who allegedly stole US$3.5 billion from the Malaysian people.

When leaders fail to lead by example, how would you expect foreign investors to have confidence in Malaysia?

Our ringgit has depreciated to RM4.48 to US$1 and RM3.10 to S$1 and as second finance minister, don’t you feel embarrassed by this?

Korkor: Hmmm, thought I heard that last year, and it’s going to be another year soon. When will it bounce back? How soon is “soon”? That’s the question even soothsayers can’t predict. Maybe we should ask our Malaysian ‘coconut binoculars’ bomoh.

Our ringgit has grown so small in size and when it does bounce back, I wonder will it be like the basketball it once was or will it be a squash ball?

Anonymous #44199885: Corruption, kleptocracy, abuse of power and failing institutions do not make a “right ecosystem” for the ringgit to bounce back.

Do the right thing, Johari – that is, do what that will put the bounce back into the RM. The question is whether you and the others in BN are up to the task.

Lulu: When the government says don’t worry, that is when you really should start worrying.

Rahman Dahlan: Opposition is all politics, no policies

Ib: The opposition has been quite clear on their policies. Respect for all races and religion. A reformed judiciary independent of the government. A police force that follows the law. Transparent procurement through open tenders. An education system that is relevant and develops skills relevant to the global economy. And the list goes on.

None of the above seem to work with the current government. The parties within BN are now showing total disrespect for one another. Many senior ministers have left the government because they are embarrassed at what happened to the previous attorney-general.

The East Coast Rail Link project is allegedly costing twice what it should because it lacks transparency, not to mention the past projects like the National Feedlot Corporation (NFC), Port Klang Free Zone (PKFZ), Scorpene submarines, Mara purchases in Australia, and the Tabung Haji land purchase from 1MDB.

And look at how Gerakan and MCA members have been chided by Umno warlords.

Aziz Kader: Minister in the Prime Minister’s Department Abdul Rahman Dahlan, I agree with you.

For example, BN’s policy is to change the word ‘corruption’ to ‘Arab donation’. Such a policy does not exist in Pakatan Harapan yet.

Old Timer: Very easy. Let the opposition take over Putrajaya for next five years and see what progress can be achieved; things that BN talks and dreams about but never achieved.

Apa Ini?: BN’s policies are all about the politics of race and religion and how much the leaders in charge will allegedly get under the table. It runs into billions.

Jaycee: Just because the information is not shared, it does not necessarily mean that the policies are not there.

At any rate, the majority of the rakyat believe that the opposition members are not a band of thieves and have squandered and/or looted the rakyat’s coffers.

Uragt: There is only one kind of policy is required for this country – Bersih. The country has gone so bad under Umno that any alternative with a basic promise of good governance would be better.

Existential Turd: Abdul Rahman, if you call having a kleptocratic government a policy, then you win.