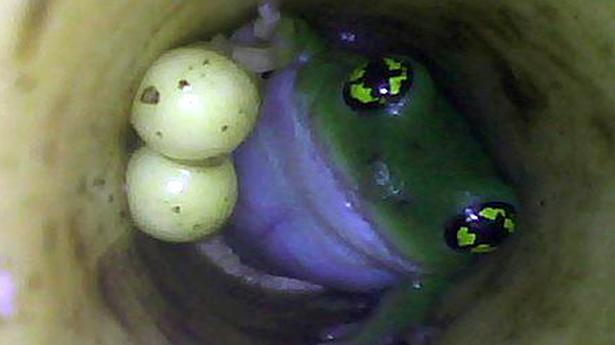 These doting dads don’t mind staying up all night to look after their babies. Male white-spotted bush frogs zealously watch over their eggs for 37 days, leaving only once tiny froglets emerge. If the adults lower their guard even for a day, other males ‘cannibalise’ the eggs, scientists say.

The observations of the bush frogs’ parental care and novel records of cannibalism, published on December 14 in BehaviouralEcology and Sociobiology (a journal dedicated to animal behaviour), add details to a breeding pattern that scientists first recorded in 2014: that of the white-spotted bush frog Raorchestes chalazodes (rediscovered in 2011 after 125 years and found only in the Western Ghats’ Agastya Hills in Kerala and Tamil Nadu) breeding inside hollow bamboo stems.

Inserting an endoscope into these bamboo stems, herpetologist Seshadri K.S., who is with the National University of Singapore, observed the breeding behaviour of the critically endangered bush frogs in Tamil Nadu’s Kalakkad Mundanthurai Tiger Reserve for his recent work.

“The males both attended to the eggs by sitting on them [possibly to keep them hydrated], and physically guarded them by standing between the eggs and the entry hole, scaring away intruders by producing loud alarm calls and even lunging at them,” said Mr. Seshadri.

The frogs deterred katydids (a kind of cricket) and even cockroaches this way.

However, when these protective fathers were removed from their egg clutches, Mr. Seshadri found that a majority (more than 70%) of the eggs perished: some were eaten by ants or infected by fungi. However, the main reason was that other male bush frogs entered the stem and ate unattended eggs. This is the first known instance of cannibalism among tree frogs of the Rhacophoridae family.

“This could be because eggs are a source of nutrition,” said Mr. Seshadri. “But it could be a territorial display which also frees up available nesting sites.”

Egg-laying sites within bamboo stems are highly prized because ideal cavities (which have to be cracked open by other animals) are few.