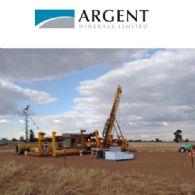 – Significant resource update planned – based on extensions of up to twice the current deposit dimensions identified by recent diamond drilling.

– Breakthroughs in revolutionary zincair battery technology announced on 15 August 2017 by University of Sydney may place further pressure on zinc demand side – as a potential competitor to lithium-ion batteries.

In addition to 33 million ounces of silver, and 86,000 ounces of gold, the existing Kempfield JORC 2012 mineral resource includes 200,000 tonnes of contained zinc.

The Company expects its zinc inventory to benefit substantially from the planned update to the Kempfield mineral resource, following recent diamond drilling results.

About the resource update

Extensional diamond drilling at Kempfield has demonstrated lateral and depth extensions equating to approximately twice the current deposit dimensions. Any depth extension to the existing resource will comprise mostly primary material – the base metals host domain.

The existing resource, which includes 200,000 tonnes of contained zinc and 97,000 tonnes of lead (see Appendix A), will be re-estimated based on a 3D model to be constructed from the extensional drilling results and an infill drilling programme.

The anticipated upgrade to the zinc and lead components of the Kempfield project, in addition to the significant silver and the prospect of increased gold resources, means that the project is a significant polymetallic project on the Australian mining landscape.

LME zinc stock levels have been reducing from approximately 1.24 million tonnes in December 2012, to 247,850 tonnes at LME close on 21 August 2017, reflecting a significant shift in supply/demand.

At a global consumption rate of 13.57 million tonnes (see Note 1 below) for 2016, this equates to less than seven days of supply, a critically low level.

The following chart illustrates the reduction in LME zinc stocks and the increase in the LME zinc spot price over the five year period from 21 August 2012, reflecting the continuing market dynamics for this essential metal.

The all time high LME zinc price of $4,603/tonne was reached in November 2006, during a period of zinc supply demand imbalance.

Zinc continues to be in high demand, with approximately 60% of annual zinc production consumed by galvanising processes for protecting steel against corrosion.

As an essential element required for the growth and function of all living things, a further 17% of zinc production is employed in agriculture to ensure security of food supply.

According to the U.S. Geological Survey, Mineral Commodity Summaries published in January 2017, global zinc mine production in 2016 was 11.9 million tonnes (see Note 2 below), 7% less than that of 2015.

Zinc mine production in Australia decreased by almost 50% as a result of the closure of the Century Mine in 2015 owing to reserves depletion and temporary production cutbacks at the George Fisher and Lady Loretta Mines. In a reversal from 2015, when production exceeded consumption, the zinc metal market fell into a sizable deficit during 2016, with consumption exceeding production.

University of Sydney researchers have found a solution for one of the biggest stumbling blocks preventing zinc-air batteries from overtaking conventional lithium-ion batteries as the power source of choice in electronic devices. Published in Advanced Materials on 14 August 2017 (see Note 3 below), a paper authored by chemical engineering researchers from the University of Sydney and Nanyang Technological University of Singapore outlines a new three-stage method to overcome this problem. The following information has been extracted from the paper and an article published by Australian Associated Press on 17 August 2017.

To date lithium-ion batteries have been the conventional choice to run high-energy portable devices such as mobile phones, power tools, and electric cars but the rare metal is expensive and the batteries are plagued by safety issues due to overheating.

Zinc-air batteries have long-been thought of as a safer, cheaper and more sustainable replacement to lithium-ion. The heavy metal is one of the world’s most abundant and more environmentally friendly to extract than lithium, but since zinc-air batteries were first produced in the 1930s they have only been single use, powering devices such as hearing aids.

This makes the batteries more suited for powering electric cars and other long lasting devices.

Whilst lead researcher Professor Chen expects the technology will take time to perfect, he believes that in five to ten years it will replace lithium-ion as the battery of choice, pointing out that it took approximately 10 to 20 years to refine lithium technology and to enter the marketplace, and that the battery market is now much more competitive.

2. The USGS publication notes that its references to ‘tons’ are metric tonnes.

Argent Minerals Limited (ASX:ARD) is an Australian publicly listed company with a 100% interest in a silver/gold project at Kempfield NSW. Work is underway on the preparation of an EIS and a feasibility study for the first stage of the project which will involve heap leaching some 8.8 million tonnes of mainly oxide and transitional material to produce over 9.5 million ounces of silver and 15,000 ounces of gold over a 5 year mine life. Argent is also earning up to a 70% interest in two other NSW projects – gold at West Wyalong and base metals at Sunny Corner.