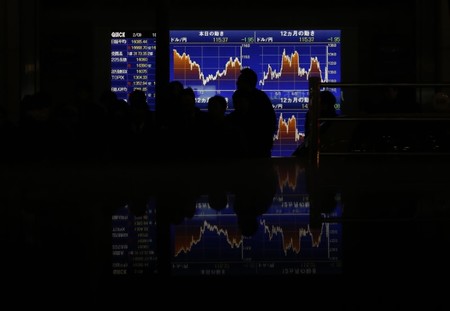 Japanese and South Korean shares headed lower while the won came under pressure on Friday, hurt by rising geopolitical tensions in the Korean peninsular in otherwise holiday-thinned trade.

Investors were spooked by worries North Korea may conduct a nuclear test or conduct other actions that could provoke neighbouring countries as early as this weekend.

News that the United States dropped “the mother of all bombs”, the largest non-nuclear device it has ever unleashed in combat, in Afghanistan on Thursday only soured investor mood further.

MSCI’s broadest index of Asia-Pacific shares outside Japan <.MIAPJ0000PUS> was down 0.4 percent, though many markets in the region, including Australia, Singapore and Hong Kong, are closed for the Good Friday public holiday.

“There’s been nothing to cheer about over the last 24 hours. Geopolitical tensions seem to be rising all over the place,” said Masahiro Ayukai, senior investment strategist at Mitsubishi UFJ Morgan Stanley Securities.

In the currency market, the won fell 0.8 percent =KFTC>

The Japanese yen was little changed at 109.12 yen per dollar, off its five-month high of 108.73 to the dollar touched on Thursday.

The dollar has also been undermined by comments from U.S. President Donald Trump earlier this week that the greenback is getting too strong and that he would like to see interest rates remain low.

The benchmark U.S. Treasury yield skidded to its lowest levels since November on Thursday, after Trump told the Wall Street Journal that he favoured low interest rates.

U.S. stock and bond futures are not traded for market holiday on Good Friday.